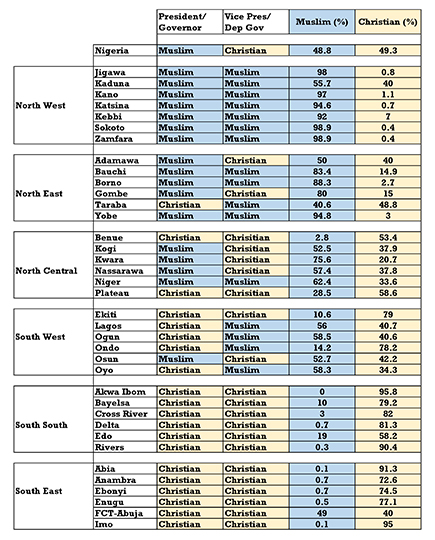 By Akin Ojumu
In a country that is evenly divided along religious lines, and at a time when religious and ethnic sensitivity is at its rawest in the country, there’s no convincing argument any political party can make to justify fielding a presidential candidate and running mate who are of the same religion. No political party or candidate genuinely interested in the peace, unity, and prosperity of Nigeria will, at this inauspicious moment in the nation’s history, insult the sensibilities of the largest religious group in the land.
All over Nigeria, the religion of the state governors and the deputy governors almost always reflects the religious composition of the people of the state. In states where there are super majority Muslims, the governors and deputy governors are always Muslims. The same goes for states that are predominantly Christians; the governors and the deputy governors are Christians.
There is no state in Nigeria where both the governor and the deputy governor come from the same minority religion. For states where the Muslim and Christian population are evenly split or where the difference is 10 percent or less, the governor and deputy governor are usual of different religions. In such scenarios, except for a couple of states, the governor will come from the religion with the higher population, while the deputy governor is of the religion with fewer population.
When viewed against this backdrop, Bola Tinubu’s decision to pick a fellow Muslim as his running mate can only be interpreted as an insult to all Nigerians; it’s giving Nigerians a middle finger. By picking Kashim Shettima to join him on a Muslim-Muslim presidential ticket, Bola Tinubu deliberately spits in the faces of the people of the Christian faith in Nigeria.
This boneheaded decision is typical of narcissists blinded by raw ambition. It’s the paralysis of analysis by a man totally hypnotized by his own electoral fortune and not the national fortunes. When all a politician cares about is winning and not governing, he is bound to commit the same unforced error as Bola Tinubu has done in picking a Muslim running mate. Since Tinubu is all so consumed with victory, he wouldn’t mind sending the country he wants to rule into the burning flames of religious war his decision could potentially incite.
Whom the gods would destroy they first make mad. Bola Tinubu’s ambition has poisoned his mind and the man is not himself. His hubris will be his demise and his arrogance his downfall. This Muslim-Muslim ticket is destined to fail.