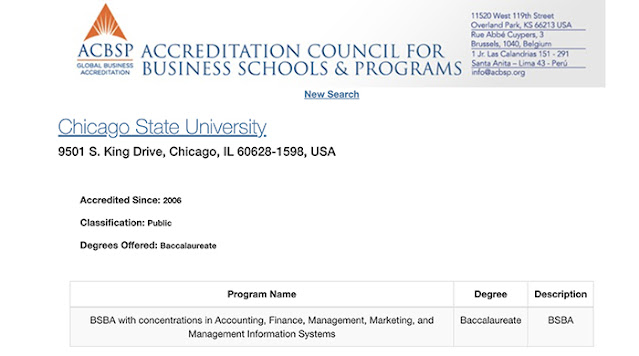 By Akin Ojumu
Asiwaju Bola Ahmed Tinubu has at various times and in sundry places claimed he earned a bachelor’s degree in accountancy, with distinction, from Chicago State University in 1979.
In his now archived online bio, Tinubu wrote:
“The brilliance of this young Nigerian showed in his ability to make the honours’ list of Richard Daley College. He subsequently transferred to the Chicago State University, Illinois, graduating with honours in 1979 and earning a Bachelor’s Degree in Business Administration (Accounting and Management). During his first year in Chicago State University, young Bola was given the rare privilege to partly teach other students of his Faculty remedial tutorial classes. Most of his colleagues and contemporaries at the university attributed their improved grades to his tutorial lectures.”
He continues:
“Throughout his undergraduate years, young Bola was on the Dean’s List and was honoured with the Outstanding Student’s Award, the University Scholar’s Award and the Certificate of Merit in Accounting and Finance. He was also awarded the prestigious Sumna cum laude for scoring 3.54 out of possible 4.0 GP.”
Having heard him and his fanatical supporters make those claims ad nauseam, we decided to investigate to check whether it is true. The following is what we found.
There is indeed a Chicago State University located in Chicago, Illinois. It is a public university founded in 1867. By designation, it is a Historically Black College and University (HBCU), i.e., it is attended by predominantly black and minority students.
Within the State of Illinois, Chicago State University is ranked below average in quality and educational excellence. According to US News Education Ranking, the school is ranked 119 out of 157 universities in Regional Universities Midwest, and it ranks 157 out of 157, i.e., at the very bottom, in terms of social mobility. This means the school is below average in educational quality and yet priced much higher than it should be.
The Chicago State University has a College of Business with concentrations in the following areas:
Accounting
Finance
Management
Management Information Systems
Marketing
Supply Chain Management
The Chicago State University College of Business is accredited by the Accreditation Council for Business Schools and Programs (ACBSP), the regulating body that accords accreditation to business schools and programs in the United States.
The College of Business, Chicago State University, received its very first accreditation from ACBSP in 2006. This means that the Bachelor of Science/Bachelor of Arts degrees with concentrations in Accounting, Finance, Management, Marketing, and Management Information Systems were not accredited until 2006, nearly 30 years after Bola Tinubu claimed he received his degree.
Based on these findings, we can only conclude that as of 1979 when Asiwaju Bola Ahmed Tinubu claimed he received his Bachelor of Science in Accounting from the Chicago State University, the College of Business from which he received the degree was not an accredited business program.
Consequently, Bola Tinubu’s BSc Accounting was not recognized as a legitimate bachelor’s degree in accounting in the United States in 1979. Whether or not the Chicago State University even had a College of Business offering its students academic degrees in accounting and finance in 1979, at a time when it was not accredited and degrees that would be useless to the graduates, is uncertain. We leave that to your imagination.