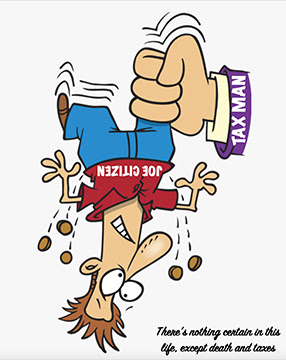 “The Fear of the Taxman”
By Akin Ojumu
While it's true that this commentary was originally written a couple of years ago, an alarming concern has again arisen that necessitates its retrieval from the archives.
It's now quite apparent that no matter how hard they try to blow it off or sweep it under the Malachi 3:8-12 carpet, this question about tithe and offering is never going to go away until those who have been made shepherds over the flock of God step up and teach on the subject truthfully and Biblically.
We started out in Part One discussing the pattern of giving in the pre-Mosaic era i.e., before the Law of Moses was established by God. In that historical period, like at other periods to be discussed in the subsequent parts of the commentary, giving took two forms, namely; Freewill Giving and Mandatory Giving.
Part One dealt exclusively with Freewill Giving. Now we turn our attention to the Required (or Mandatory) Giving in the pre-Mosaic Law era.
Required Giving Pre-Mosaic Law
Genesis 41:34 – “Then Pharaoh should appoint supervisors over the land and let them collect one-fifth of all the crops during the seven good years.”
For seven years, Joseph told Pharaoh to tax the people at a rate of one fifth – which is 20 percent. Here is the introduction of taxation in the economy of Egypt.
This is the first time you find the taxation of a national entity expressed this way. The tax was 20 percent which is somewhat similar to the taxation in most countries today.
The 20 percent taxation was the basic taxation rate in Egypt. This was God's plan as it was expressed through Joseph. And they collected the 20 percent through the fat years that would supply them the needed foods for the lean years.
So, a taxation was instituted at that point and 20 percent was the figure. And we can say that it was God who introduced it since He gave Joseph the wisdom to come up with the idea.
In Genesis 47:24. “It shall come to pass in the harvest you shall give the fifth part to Pharaoh, four parts shall be your own for seed for the field, for your food, for them of your households and for food for your little ones.”
The required giving in the Old Testament was 20 percent. It was instituted in Egypt and it was a national tax for the funding of the national government.
Before the Law of Moses was instituted, and prior to the advent of Aaronic priesthood, the freewill giving was directed toward the LORD. It was done personally as a response of love and sacrifice to the goodness of the Almighty God.
Cain and Abel offered their sacrifices out of a free will. Abraham chose to give Melchizedek a tenth of the spoil of war without being compelled to do so. It was his choice and his alone. When Jacob made a vow to give YAHWEH a tenth of all the blessings that God would bless him with, he was not following a divine command or injunction. It was a voluntary decision.
On other hand, required giving pre-Mosaic Law was done in obedience to a mandate. It was always a taxation that required giving to the national entity for the supply of the needs of the people.
The government of Pharaoh set their effective taxation rate at 20 percent. All the inhabitants of the kingdom were required by law to pay the 20 percent. This was the same pattern you would find in all the ancient empires from the time of creation up until the time the Law of Moses was established.
Many nations, even today, have adopted this ancient empire system of taxation to some degree or the other.
According to World Population Review:
“Taxes come in many forms, including sales tax, income tax, property tax, inheritance and estate taxes, excise tax, and more. Plus, tax rates and regulations vary greatly from country to country, and even within different parts of the same country. For example, most U.S. states charge some form of income tax, but an individual state's income tax rate may be anywhere from 1% to 13.3%. Moreover, seven states (Alaska, Florida, Nevada, South Dakota, Texas, Washington, and Wyoming) do not collect any state income tax at all, and two more (New Hampshire and Tennessee) tax interest and dividend income, but not wages or salaries.”
Tax evasion comes with severe consequences in most countries. Penalty includes but not limited to fines and levies, wage garnishment, and several years of imprisonment. In the US, interest accrues on any unpaid tax from the due date of the return until the date of payment in full. The interest rate is determined quarterly and is the federal short-term rate plus 3 percent. Interest compounds daily (Source: US Internal Revenue Service).
So, unlike freewill giving (offerings) which is totally voluntary, required giving (taxation) is a must, and the fear of the taxman is the beginning of wisdom.