GOD’S WRATH IS COMING TO THE SPIRITUAL PREDATORS 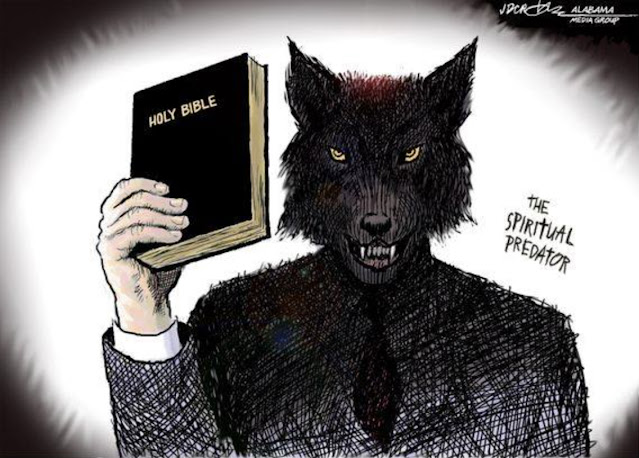 By Prophet Ezekiel
Then this message came to me from the LORD:
“Son of man, prophesy against the false prophets of the Church who are inventing their own prophecies. Say to them, ‘Listen to the word of the LORD. This is what the Sovereign LORD says:
What sorrow awaits the false prophets who are following their own imaginations and have seen nothing at all!’ “O people of God, these prophets of yours are like jackals digging in the ruins. They have done nothing to repair the breaks in the walls around the Church. They have not helped it to stand firm in battle on the day of the LORD. Instead, they have told lies and made false predictions. They say, ‘This message is from the LORD,’ even though the LORD never sent them. And yet they expect him to fulfill their prophecies! Can your visions be anything but false if you claim, ‘This message is from the LORD,’ when I have not even spoken to you?
“Therefore, this is what the Sovereign LORD says:
Because what you say is false and your visions are a lie, I will stand against you, says the Sovereign LORD. I will raise my fist against all the prophets who see false visions and make lying predictions, and they will be banished from the community of God’s people. I will blot their names from the Church’s record books, and they will never again set foot in the Church. Then you will know that I am the Sovereign LORD.
“This will happen because these evil prophets deceive my people by saying, ‘All is peaceful’ when there is no peace at all! It’s as if the people have built a flimsy wall, and these prophets are trying to reinforce it by covering it with whitewash! Tell these whitewashers that their wall will soon fall down. A heavy rainstorm will undermine it; great hailstones and mighty winds will knock it down. And when the wall falls, the people will cry out, ‘What happened to your whitewash?’
“Therefore, this is what the Sovereign LORD says:
I will sweep away your whitewashed wall with a storm of indignation, with a great flood of anger, and with hailstones of fury. I will break down your wall right to its foundation, and when it falls, it will crush you. Then you will know that I am the LORD. At last my anger against the wall and those who covered it with whitewash will be satisfied. Then I will say to you:
‘The wall and those who whitewashed it are both gone. They were lying prophets who claimed peace would come to the Church when there was no peace. I, the Sovereign LORD, have spoken!’
“Now, son of man, speak out against the women who prophesy from their own imaginations. This is what the Sovereign LORD says:
What sorrow awaits you women who are ensnaring the souls of my people, young and old alike. You tie magic charms on their wrists and furnish them with magic veils. Do you think you can trap others without bringing destruction on yourselves? You bring shame on me among my people for a few handfuls of barley or a piece of bread. By lying to my people who love to listen to lies, you kill those who should not die, and you promise life to those who should not live.
“This is what the Sovereign LORD says:
I am against all your magic charms, which you use to ensnare my people like birds. I will tear them from your arms, setting my people free like birds set free from a cage. I will tear off the magic veils and save my people from your grasp. They will no longer be your victims. Then you will know that I am the LORD. You have discouraged the righteous with your lies, but I didn’t want them to be sad. And you have encouraged the wicked by promising them life, even though they continue in their sins. Because of all this, you will no longer talk of seeing visions that you never saw, nor will you make predictions. For I will rescue my people from your grasp. Then you will know that I am the LORD.”
Adapted from Ezekiel 13