THE BOOK I’M READING THIS WEEK 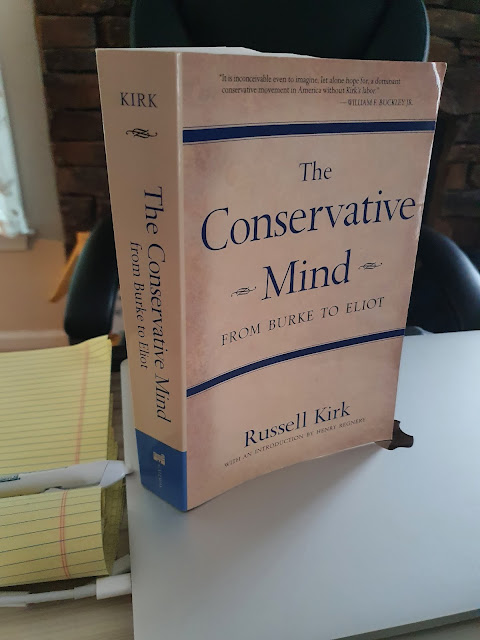 By Akin Ojumu
It is a love-hate relationship between me and books. On the one hand, I hate reading. To pick up a book and read often feels like waterboarding or tooth extraction without anesthesia to me. On the other hand, I hate being ignorant and love to know things. So, what I do is, I force myself to endure the pain and agony of the tooth extraction; I make myself read just so I can gain the knowledge I desire.
This week, I’m reading the book, “The Conservative Mind – From Burke to Eliot,” by Russell Kirk. This book, originally published in 1953, has been in my library for more than 15 years, but I have not gotten around to really reading it. I decided to pick it up now because of what conservatism has become in the current political climate in America – and by extension the world.
Conservatism, as a political ideology, used to be known and respected for its serious intellectualism, breath of scholarship, and depth of thought. In these days of Trumpism and Palinism, the badge of honor of an average conservative is disdain for intellect, knowledge, expertise, and science. The old political philosophy of Edmund Burke and Ronald Reagan has been reduced to cheap soundbites, tweeted insults, racist trolls, easy sloganeering, pretend nationalism, rabid nativism, and outright ignorance. The quintessential conservative is now an anti-science, anti-intellectual, bigoted racist xenophobe, who embraces all kinds of conspiracy theories and welcomes fascism.
From time to time, we must remind ourselves of the golden age of conservatism; the time it was a serious governing philosophy. Hence, the reason I dusted up this book to take a voyage down memory lane to peep into the mind of a true conservative.