THE EXCLUSIVE CLUB OF THE ONE-TERM REJECTS (COTR) 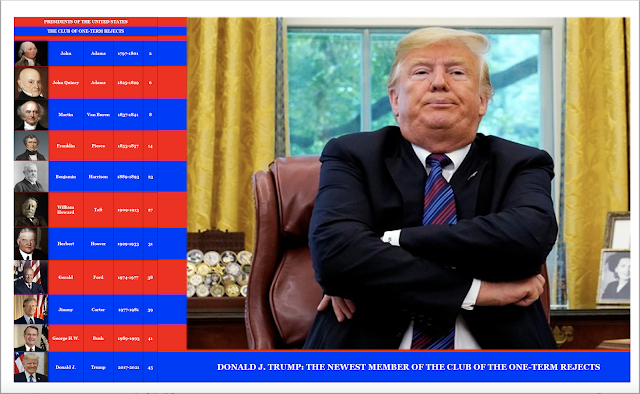 By Akin Ojumu
The Club of the One-Term Rejects, COTR, is an exclusive club of losers and a fraternity of undesirables. It is an assembly of deadbeats; the “one-term and doners” shunned and scorned by millions of people.
The members of this club are like sour milk that has passed its sell by date; unwanted, discarded, and flushed down the kitchen sink. Because no sane person likes the label of a loser, this is one of the few exclusive clubs that nobody wants to be affiliated with. Although membership is limited and restricted to a few, it is almost always unsought and unwanted by no one.
Rejection stings; much more painful than the sting of an executioner wasp.  So, it is quite understandable that Donald Trump is throwing temper tantrums as he is being dragged, kicking and screaming, through the doors of the clubhouse, to be inducted as the newest member of the One-Term Rejects. To be told, “You are Fired,” by more than 77 million Americans must really hurt the man with thin skin and tiny fingers. Being taken to the electoral cleaners by no other person than "Sleepy Joe", the opponent who spent the better part of the campaign in his basement, must have inflicted a mortal wound on the psyche of a man with a notoriously fragile ego and a windbag with a bloated sense of self-importance.
We wish Donald J. Trump all the best in his life tenure as a member of the One-Term Rejects. Enjoy your new life as a loser and a dud.  You'll be happily and ecstatically missed by us all, and we'll never, ever, forget you. Now, we can resume our lives, from where we left off 4 year ago, free from your Twitter tirades.