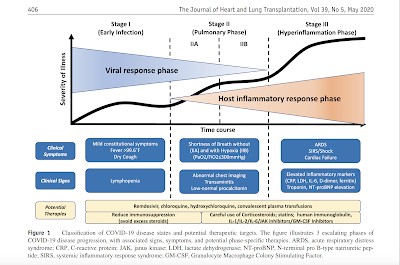 STAGE I (MILD) – EARLY INFECTION
The initial stage occurs at the time of inoculation and early establishment of disease. For most people, this involves an incubation period associated with mild and often non-specific symptoms, such as malaise, fever, and a dry cough. During this period, SARS-CoV-2 multiplies and establishes residence in the host, primarily focusing on the respiratory system.

Treatment at this stage is primarily targeted toward symptomatic relief. Should a viable anti-viral therapy, such as remdesivir, be proven beneficial, targeting selected patients during this stage may reduce duration of symptoms, minimize contagiousness, and prevent progression of severity.

In patients who can keep the virus limited to this stage of COVID-19, prognosis and recovery are excellent.

STAGE II (MODERATE) – PULMONARY INVOLVEMENT (IIA) WITHOUT AND (IIB) WITH HYPOXIA
In the second stage of established pulmonary disease, viral multiplication and localized inflammation in the lung are the norm. During this stage, patients develop a viral pneumonia, with cough, fever, and possibly hypoxia (defined as PaO2/FiO2 < 300 mm Hg). Imaging with chest roentgenogram or computed tomography reveals bilateral infiltrates or ground glass opacities. Blood tests reveal increasing lymphopenia, along with transaminitis. Markers of systemic inflammation may be elevated, but not remarkably so.

It is at this stage that most patients with COVID-19 would need to be hospitalized for close observation and management.

Treatment would primarily consist of supportive measures and available anti-viral therapies such as remdesivir (available under compassionate and trial use).

In early Stage II (without significant hypoxia), the use of corticosteroids in patients with COVID-19 may be avoided. However, if hypoxia ensues, it is likely that patients will progress to requiring mechanical ventilation, and in that situation, we believe that the use of anti-inflammatory therapy such as with corticosteroids may be useful and can be judiciously employed. Thus, Stage II disease should be sub-divided into Stage IIa (without hypoxia) and Stage IIb (with hypoxia).

STAGE III (SEVERE) – SYSTEMIC HYPERINFLAMMATION
A minority of COVID-19 patients will transition into the third and most severe stage of the illness, which manifests as an extrapulmonary systemic hyperinflammation syndrome. In this stage, markers of systemic inflammation seem to be elevated. COVID-19 infection results in a decrease in helper, suppressor, and regulatory T cell counts.

In this stage, shock, vasoplegia, respiratory failure, and even cardiopulmonary collapse are discernable. Systemic organ involvement, even myocarditis, would manifest during this stage.

Tailored therapy in Stage III hinges on the use of immunomodulatory agents to reduce systemic inflammation before it overwhelmingly results in multiorgan dysfunction. In this phase, use of corticosteroids may be justified in concert with the use of cytokine inhibitors such as tocilizumab (IL-6 inhibitor) or anakinra (IL-1 receptor antagonist). Intravenous immune globulin may also play a role in modulating an immune system that is in a hyperinflammatory state.

Overall, the prognosis and recovery from this critical stage of the illness are poor, and rapid recognition and deployment of such therapy may have the greatest yield.
___________________________________________________
COVID-19 illness in native and immunosuppressed states: A clinical–therapeutic staging proposal
Hasan K. Siddiqi, MD, MSCR, and Mandeep R. Mehra, MD, MSc
Brigham and Women’s Hospital and Harvard Medical School, Boston,
Massachusetts.
The Journal of Heart and Lung Transplantation, March 20, 2020