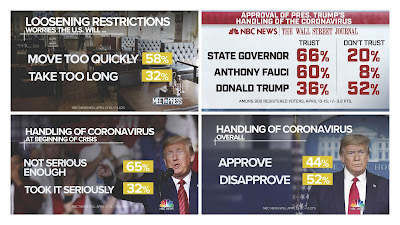 Egged on by the narcissist with his “LIBERATE” tweet, certain of the MAGA crowd, without face masks and ignoring the social distancing guidelines, have taken to the streets of states around the country which are epicenters of the Coronavirus pandemic. According to these folks, they are out in the streets to protest – read that as political campaign rally – the COVID-29 lockdown and to demand that their respective state governments open up the states so that normal activities can resume.

It is indeed wishful thinking to expect this man, whose staggering failure in the management of the pandemic led to over 760,000 confirmed cases of COVID-19 and more than 40,600 deaths in the US, to be remorseful and mindful of the consequences of instigating a revolt in the States most affected by the disease. As an egomaniac, there’s nothing beyond his depraved mind and there’s no moral boundary he would not cross.

Almost 6 weeks into the lockdown imposed in the country, American people are understandably sick and tired of having their lives ground to a halt. They want their lives restored back to normal with businesses, schools, churches, sporting events, etc. all reopened. As much as they would like life to return to normal though, they do not want a situation where the COVID-19 restrictions and lockdowns are lifted thoughtlessly or too recklessly. They are aware that SARS-CoV-2 is a serious disease and they know more people will contract COVID-19 and many more will die if politics, prospects at the next elections, or the value of the stock market replace science, data, public health, and value of life as the major considerations and metrics used in deciding how and when it is right to reopen the country.

By now, the American public have wizened up to the “me and me only all the time” antics of the man in the White House. They’ve since realized this man cares only about himself and only looks out for his own interest or well-being and not theirs. They are not fooled by the self-aggrandizing, self-praise, and fawning braying that emanate from the White House COVID-19 daily briefings; Americans know these briefings are nothing more than MAGA rallies from the White House.

As shown in the latest poll by NBC News and Wall Street Journal, the American public, by a wide margin, have more faith in Dr Anthony Fauci and the State Governors than they do in the man supposed to be in charge, whose words have become mere sounding brass and clanging cymbals. What the American people see, when they look at the man supposedly at the helm of affairs of the nation, is an incompetent blowhard who is in over his head and profoundly lacks the character and capability to lead the nation in the time of crisis.

So, the American public are unmoved by the MAGA rallies organized by the MAGA crowds . A large majority of Americans understand that these MAGA puppets - who have been likened to "Typhoid Mary" - who are out there bunched together without face masks at these rallies, which inevitably put their lives and that of others at risk, are senseless fools who have turned themselves into pawns in the political playbook of a morally derelict man.