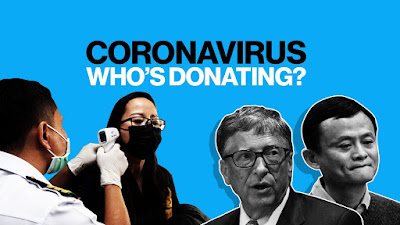 As the world is gripped with the terror of the Coronavirus pandemic, no one is safe. Coronavirus is an equal opportunity infector; from the high and mighty to the lowly and inconsequential, and from the experts in the ivory towers to the layman on the street corners, COVID-19 fears no one and spares no one.

Some of the world's wealthiest people have therefore risen up to do their part to fight the scourge. Below is a list of a few of them and what they are doing to help:

BILL GATES (Microsoft): Commits $100 million to aid global detection, isolation and treatment of COVID-19. More than half of it will go toward developing vaccines, treatment and diagnostics.

MARK ZUCKERBERG (Facebook): To quadruple the Bay Area’s testing and diagnostics capacity – including purchasing two FDA-approved diagnostic machines. On March 17, Facebook announced a $100 million grant to aid small businesses impacted by COVID-19. The social media giant has also committed to match $20 million in donations to the United Nations Foundation, the World Health Organization (WHO) and the U.S. Centers for Disease Control (CDC).

MICHAEL BLOOMBERG (Bloomberg Empire): The media billionaire has launched a $40 million initiative to prevent or slow the spread of COVID-19 in low- and middle-income countries. Bloomberg Philanthropies is partnering with the World Health Organization (WHO) and global health organization Vital Strategies.

BRIAN CHESKY (Airbnb): The Airbnb CEO announced on Saturday March 14 that it will allow guests worldwide to cancel without incurring fees through April 14.

MARK CUBAN (Dallas Mavericks): Providing full reimbursement to employees for breakfast or lunch purchases made from independent, local establishments in the Dallas region. Cuban has confirmed to Forbes that American Airlines Center arena employees will be paid as if the season had not been halted.

MICHAEL DELL (Dell Computers): The tech giant that bears his name has donated $284,000 (2 million yuan) to provide medical supplies such as surgical masks to hospitals in China. Dell is also donating $853,000 (6 million yuan) worth of IT services to the Center for Disease Control and Prevention in Hubei province. The company has also set aside $3 million in funds and in-kind technology donations to help COVID-19 efforts worldwide.

When it comes to Nigerian Billionaires, I hit a blank. I'm left to crowdsource it to you all to fill in the blanks...