CORONAVIRUS PANDEMIC UPDATE: A TRAVEL BAN ON EUROPE IS A BAND AID ON A SUPPURATING ULCER 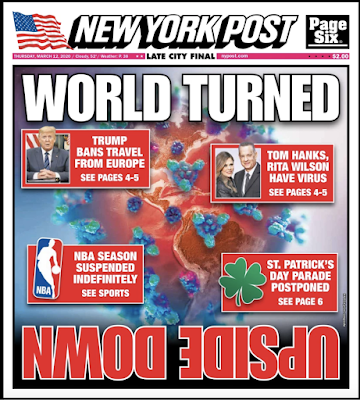 The travel ban, which only applies to citizens from these countries, however, US Citizens and Permanent Residents are exempt.

A travel ban is an effective epidemiological measure to contain an infectious disease by limiting its spread when the disease has not yet been reported in the country imposing the travel ban. However, the Coronavirus pandemic has moved beyond the stage of containment, there is already a vast community spread of the virus in the US. This is no longer a travel related illness that you stop by imposing a travel ban.

As of Thursday morning, at least 1,280 people in 44 states and Washington, D.C., have tested positive for coronavirus, according to a New York Times database, and at least 38 patients with the virus have died.

A travel ban at this stage is like applying a band aid to a suppurating sore. It won’t work because we are way passed the point of containment. Coronavirus is now widespread in the country. The virus has already entered the country, it is too late to close the border; the thief is in the house, closing the door now does no one any good. What is most important now is finding the virus through testing and eliminating it.

However, due to a lack of availability of testing kits, not enough Americans are being tested to detect the infection, because the Trump administration turned down the WHO provided test kits and the country has not being able to develop enough of its own test kits. South Korea's testing total so far, when broken down into number of tests performed per million citizens, is about 700 times higher than the US; while South Korea performs 10,000 tests on a daily basis, the US has till date carried out a total of about 11,000 tests since the beginning of the pandemic.

So, 3 months into the global pandemic, the United States is not testing enough people in order to determine the actual number of cases of Coronavirus in the country. What is not in doubt though is the fact that there are far more cases in the country than has been reported.

According to Harvard Gazzette, “Epidemiology Professor Marc Lipsitch, head of the Center for Communicable Disease Dynamics at the Harvard T.H. Chan School of Public Health, called the pace of coronavirus testing in the U.S. “utterly inadequate” and “a debacle” that robs public health officials of information crucial to devising an effective response and protecting health care workers. Testing has been so slow that no one knows the extent of the U.S. epidemic, though scientists guess at somewhere between “tens of thousands and hundreds of thousands” of cases.”

What the country urgently needs to stop this pandemic from becoming a disaster are the following:

This pandemic is a major big deal; a very serious public health crisis. It is not a media hoax and not an attempt to takedown Donald Trump. The Coronavirus pandemic is not about Donald Trump, it is a matter of life and death. Anyone downplaying or minimizing its seriousness is guilty of criminal negligence.

As always, be calm, be informed, be vigilant, be prepared.