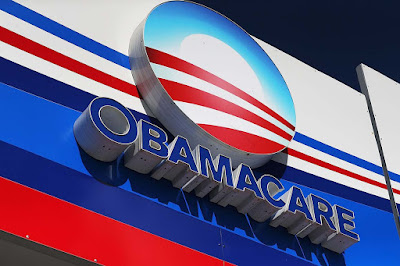 Lack of health coverage has been a persistent problem in the US. The Affordable Care Act (ACA), also known as Obamacare, sought to address gaps in the health coverage system and led to historic gains in health insurance coverage by extending Medicaid coverage to many low-income individuals and providing Marketplace subsidies for individuals below 400% of poverty. The number of uninsured nonelderly Americans decreased from over 46.5 million in 2010 (the year the ACA was enacted) to just below 27 million in 2016.

As millions of people enrolled in new coverage options under the Obamacare, the uninsured rate dropped to its lowest level from 2013 to 2016; however, amid efforts, (by Donald Trump, the Republican Party, the rightwing movement and Christian conservatives), to repeal Obamacare and alter the availability and affordability of coverage, the uninsured rate has increased in each of the past two years.

Prior to the Obamacare, gaps in the public insurance system and lack of access to affordable private coverage left millions without health insurance. Under Obamacare, Medicaid coverage has been extended to nearly all adults with incomes at or below 138% of poverty in states that have expanded their programs, and tax credits are available for people who purchase coverage through a health insurance marketplace. As a result, the number of uninsured dropped from more than 46.5 million in 2010 to fewer than 26.7 million in 2016. In 2018, the number of uninsured increased to 27.9 million nonelderly individuals.

Who are the uninsured?
Most uninsured people are in low-income families and have at least one worker in the family. Reflecting the more limited availability of public coverage in
some states, adults are more likely to be uninsured than children. People of color are at higher risk of being uninsured than non-Hispanic Whites. 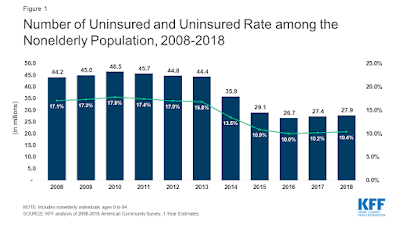 How does not having coverage affect health care access?
People without insurance coverage have worse access to care than people who are insured. One in five uninsured adults in 2018 went without needed medical care due to cost. Studies repeatedly demonstrate that uninsured people are less likely than those with insurance to receive preventive care and services for major health conditions and chronic diseases.

What are the financial implications of being uninsured?
The uninsured often face unaffordable medical bills when they do seek care. In 2018, uninsured nonelderly adults were over twice as likely as their insured counterparts to have had problems paying medical bills in the past 12 months. These bills can quickly translate into medical debt since most of the uninsured have low or moderate incomes and have little, if any, savings.