CORONAVIRUS PANDEMIC UPDATE: HOW ONE PERSON (PATIENT 31) ACCOUNTS FOR OVER 60% OF COVID-19 CASES IN SOUTH KOREA 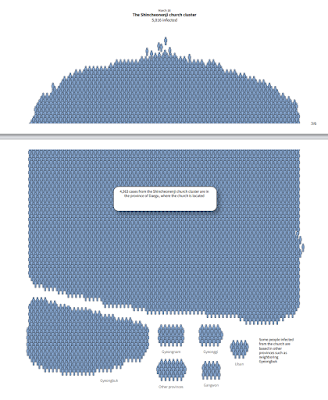 It’s not clear where Patient 31 became infected with the virus, but in the days before her diagnosis, she travelled to crowded spots in Daegu, as well as in the capital Seoul. On February 6 she was in a minor traffic accident in Daegu, and checked herself into an Oriental medicine hospital. While at that hospital, she attended services at the Daegu branch of the Shincheonji Church of Jesus, on February 9 and again on February 16.

In between those visits, on February 15, doctors at the hospital said they first suggested she be tested for the coronavirus, as she had a high fever. Instead, the woman went to a buffet lunch with a friend at a hotel. In an interview with local newspaper JoongAng Ilbo, the woman denied that doctors had advised her to be tested. As her symptoms worsened, however, doctors say they once again advised her to be tested. On February 17, she finally went to another hospital for the test. The next day, health authorities announced she was the country’s 31st confirmed case. In only a matter of days, those numbers had soared as hundreds of people at the Shincheonji Church and surrounding areas tested positive.

The Korea Centers for Disease Control & Prevention (KCDC) initially obtained a list of 9,300 people who had attended those two Shincheonji church services, around 1,200 of whom had complained of flu-like symptoms. Thousands of cases have now been confirmed there.

Another smaller cluster emerged from a nearby hospital in Cheongdo, a county close to Daegu. Authorities are investigating links between the church in Daegu and a funeral service at the hospital, which a number of church members attended from January 31-February 2. If confirmed, it means Patient 31 could be linked to both clusters.

As of March 18, the Shincheonji Church cluster accounts for at least 60% of all cases in South Korea.

Authorities are still investigating how Patient 31 contracted the virus, having no recent record of overseas travel or earlier known contact with other confirmed cases.