FEARMONGERING: THE WEAPON OF ALL DEMAGOGUES 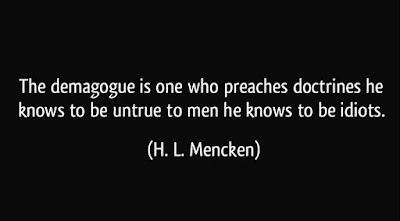 Demagogues don’t emerge because they have a deep love of country or because they sincerely care about people’s sufferings. Demagogues rise by preying on the fear of the people. They all share a common attribute of having a keen sense of the anxieties of the citizens e.g. high rate of unemployment, steep economic downturn, extreme poverty, etc. And they are quick to latch on, like fleas, to these anxieties and blow them out of proportion, creating, by their utterances and actions, a heightened sense of terror and impending doom. Demagogues also understand the fault lines that exist within a society, and they exploit them for their own political gains.

This is the modus operandi of all demagogues, and it is what they all do.

In Adolf Hitler’s Germany, it was the fear of the Jews by the German people. The Rwandan Hutu majority feared the Tutsis whom they consider cockroaches and locust draining life out of the economy. In 1960 Nigeria, it was the fear of the entrepreneurial Ibo people by the kolanut chewing and preternaturally lazy Hausa/Fulani of Northern Nigeria.

In Donald Trump's America, it is the fear of the brown and black skinned immigrants from economically poor, disease infested, and crime ridden shithole countries.