YOUR GENES DRAW THE MOSQUITOES 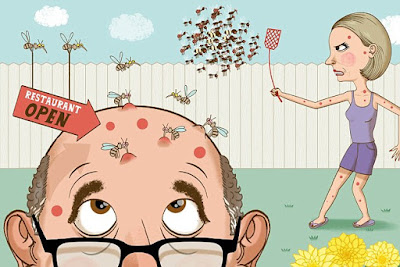 Mosquitoes really do prefer some people to others, says Dr. Jonathan Day, a medical entomologist and mosquito expert at the University of Florida. “Some people produce more of certain chemicals in their skin,” he explains. “And a few of those chemicals, like lactic acid, attract mosquitoes.” There’s also evidence that one blood type (O) attracts mosquitoes more than others (A or B).

Unfortunately, your genes dictate your blood type and the chemical makeup of your birthday suit. Genetics also determine several other factors that could make you an object of blood-sucking affection for your local mosquito population, Day says. Maybe the most important: Your metabolic rate, or the amount of carbon dioxide (CO2) your body releases as it burns energy.

Mosquitoes use CO2 as their primary means of identifying bite targets, Day says. Why? “All vertebrates produce carbon dioxide, so what better way could there be for a mosquito to cue in on a host?” And while it’s true that you can moderate your metabolic rate through diet and exercise, you can only change your metabolism so much, Day says.

“Pregnant women and overweight or obese people tend to have higher resting metabolic rates, which may make them more attractive to mosquitoes,” he explains. Also, drinking alcohol or physically exerting yourself raises your metabolic rate—and also your appeal to winged biters, he adds. (Exercising before grabbing a beer and heading outside = asking for trouble.)

While CO2 detection is the primary technique mosquitoes and other blood-sucking bugs use to spot hosts, they also rely on secondary cues to differentiate you from cars, decaying trees, and other CO2-producing objects. And you can control some of those secondary cues, Day says.

For example: Dark clothing is more attractive to mosquitoes than light outfits. Why? “Mosquitoes have problems flying in even a slight wind, and so they keep close to the ground,” Day explains. Down there, they spot hosts by comparing your silhouette to the horizon. Dark colors stand out, while light shades blend in, he says. At the same time, lots of motion distinguishes you from your surroundings. So, if you’re moving around a lot or gesturing, you might as well be shouting, “Hey, mosquitoes! I’m right here, ladies!” (Only the females bite, Day says.)