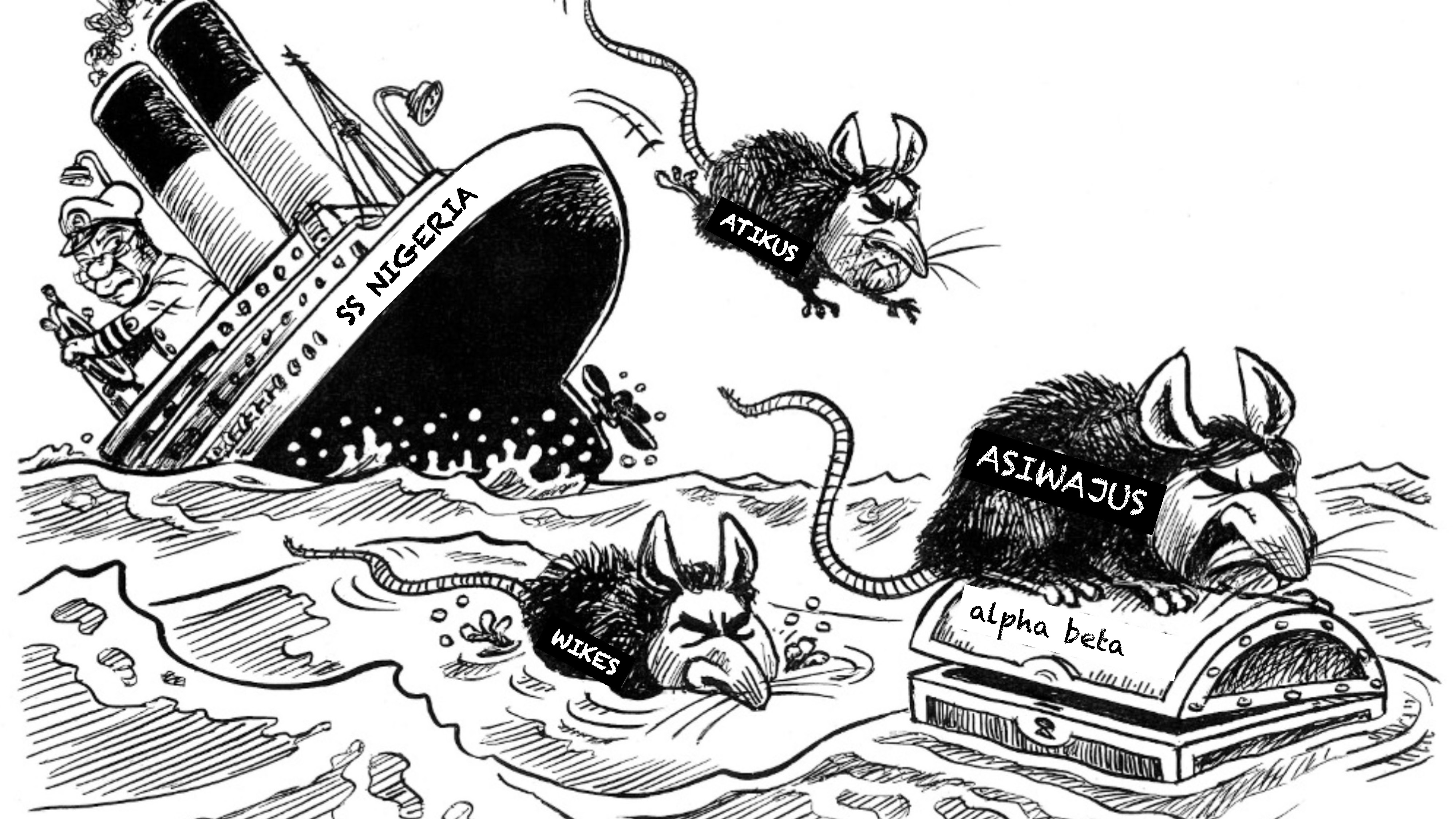 “Nigeria’s Ruling Class Are Like Rats from a Sinking Ship”
By Akin Ojumu
Just like the human body, sovereign states (or sovereign nations) are made up of groups of people who share a lot in common and live within defined and internationally recognized geographical boundaries. Many nations (defined as culturally homogeneous groups of people which share a common language, institution, religion, and/or historical experience) often exist within a sovereign state.
In order for a sovereign state to survive, the people groups within it cannot afford to take on the mentality of cancer cells. The prosperity and wellbeing of the sovereign state depends entirely on the existence of peace and concord between the constituent nations. For the sovereign state to thrive and rise the people that make up the nations will have to live together in harmony and work together in unison for the greater good.
A broken nation is like a broken body, it’s a byproduct of broken harmony. Without a rapprochement between the people that make up a nation, the sovereign state crumbles. As it is with a body overtaken by disease, when the bond of unity among the people of a nation is broken disorder ensues and the people are at cross-purposes with one another. The result is a disunited people consumed by their individual narrow interests, a chaotic society at war with itself, and a degenerate state where hopes are shattered, dreams go unfulfilled, and potentials get wasted. Broken nations are graveyards for creativity and are sepulchers for ingenuity. It is a place of pain and a land of misery where lack and despair reign supreme.
Nigeria is an example of such a broken nation. It is a place where narrow interests trump the greater good and the people can’t seem to see the forest for the trees. The nations that make up Nigeria are perpetually up in arms against one another. The seed of discord sown by the nation’s founders have now grown and ripe for harvest. Distrust is in the very air that the people breathe, and suspicion is the oxygen that feeds the flames of hate among the people. And the soot that falls from the burning wreckage cover over the rich heritage that all Nigerians share in common.
The Nigeria house is divided against itself, there’s chaos all around. The nation is sick, and there are those who believe this sickness is unto death with no hope of recovery. As the ship of the nation submerges lower and lower under the waters, everyone on board wants to jump ship and escape.
The call for restructuring fills the air, and secession is seen as the solution to the nation's myriad of problems. Unbeknownst to many, secessions have already occurred, and are occurring on a daily basis. The union of the Nigeria nation has long been dissolved, it’s just not in the way we think of how such unions or dissolutions go. The breakaway is happening in a manner unrecognizable by many Nigerians.
Like rats jumping off a sinking ship, Nigeria’s ruling class surreptitiously seceded from the country a long time ago. Those who rule Nigeria have since obtained decree nisi and they have in their hands the absolute divorce decree. The privileged in the society have dumped the rest of Nigerians, as they have given them a letter of divorce.
To the runway rulers, ordinary Nigerians are worthless nothings who add nothing of value to the bottom lines. Therefore, they don’t deserve to be provided a ladder of opportunity which they can climb out of their hardship and poverty. Giving them a helping hand is not a purpose worth pursuing. Having concluded that their own well-being is not tied to their fellow citizens, the ruling class have severed the cord from the rest of Nigerians.
You only need to look at the deplorable condition of the country to see the proof of this divorce. It’s obvious in the non-existence institutions, and obvious from the crumbling infrastructures. The crumbling foundation and collapsing pillars of a virile society all tell the story.
Nigerian rulers have no need for institutions or infrastructures, for they are an institution to themselves. They have the means to provide for themselves all the infrastructures they need to live, so why bother fixing them. Strong institutions mean accountability and solid infrastructures require responsibility. Both lead to questions being asked and answers being demanded.
Opening such a can of worms will only lead down a rabbit hole they’d rather not go. So, the rulers of Nigeria keep the can shut.