LOVE NOT THE WORLD (PART I) 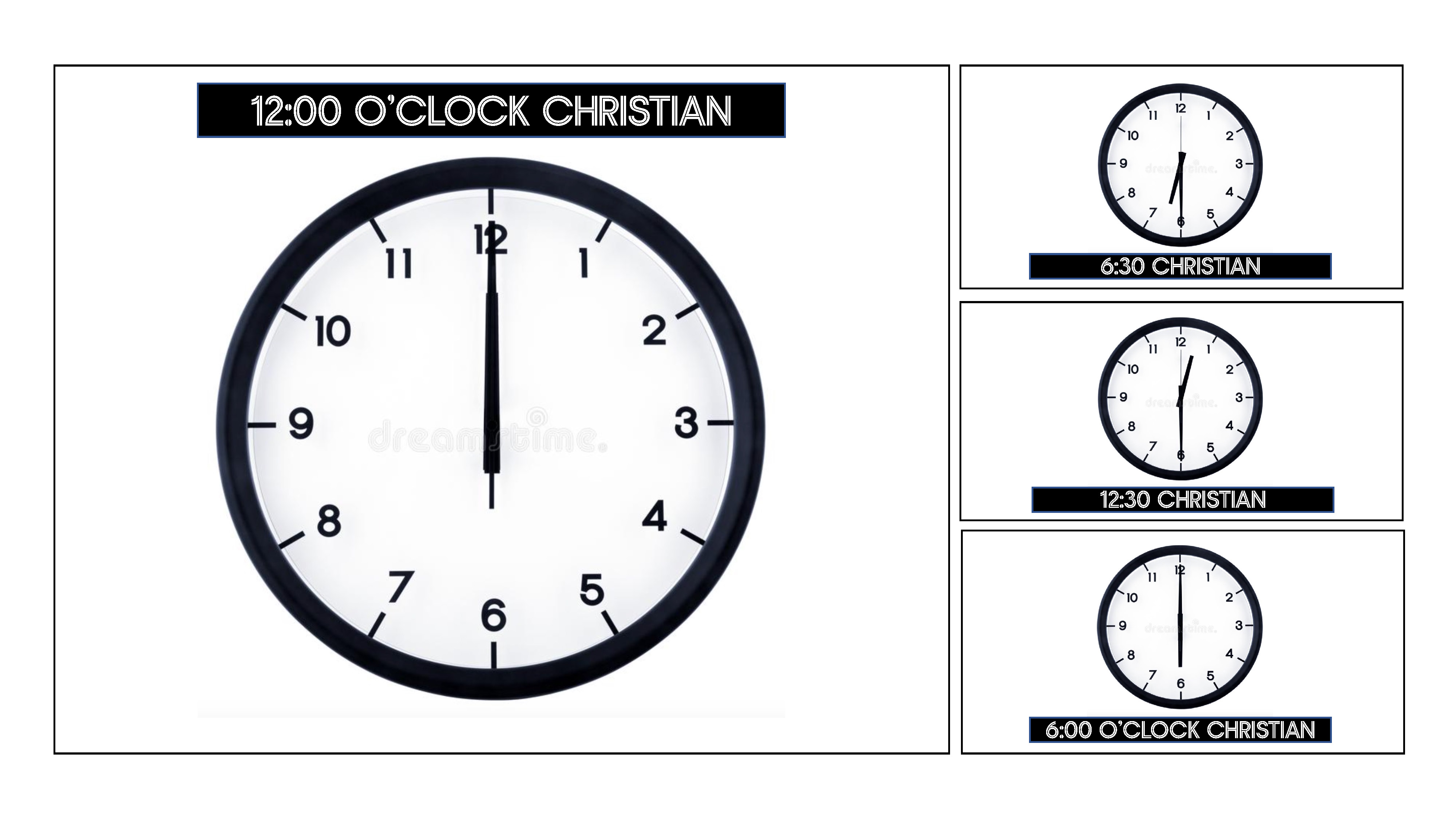 “The Travail of the Twelve O’clock Christians”
By Akin Ojumu
For far too long, the twelve o’clock Christians have gotten a bad rap. Derided & disparaged by fellow believers, these heavenly-focused believers have been at the receiving end of cruel jokes and undeserved ridicule.
If you are reading this and you haven’t got a clue what I’m talking about, it’s obvious you are a new kid in the block and not an old-school like me. My fellow old-timers know exactly what I mean. But, for the sake of the newbies, I’m going to explain myself.
Back in the day, there were four categories of Christians in the Christian assembly on the university campuses. They were named after four different positions of the hands of the analog clock. For Gen-Xs not familiar with analog clocks, you’d find the accompanying photo to this commentary helpful.
The following are the four positions of the clock herewith described:
Six (6:00) O’clock – the time is 6 o’clock when the long arm of the clock is up at 12 and the short arm is down at 6.
Six-thirty (6:30) – both arms of the clock are down; the long arm is at 6, while the short arm is between 6 and 7.
Twelve (12:00) O’clock – the time is 12 o’clock when both arms of the clock are up at 12.
Twelve-thirty (12:30) – this is when the short arm of the clock is up between 12 and 1 and the long arm is down at 6.
In order to understand the categories of College Christians, though, the arm of the clock being up is considered to be heavenly, while when the arm of the clock is down it is earthly (or worldly).
Having described the positions of the arms of the clock and the corresponding times, let me now show you how these four positions and times are used to categorize Christians on the College Campus.
Six-Thirty (6:30) Christians
First, you have those that were called the Six-thirty (6:30) Christians. These were carnal Christians whose entire focus was earthly and who concerned themselves with temporal things all the time. The thought of heaven was not in their consciousness. They loved the world passionately and adored the things of the world assiduously. The six-thirty (6:30) Christians were described as so earthly-focused that they’ve become Heavenly no good.
Twelve (12:00) O’clock Christians
The second category of people were the twelve (12:00) o’clock Christians. In direct contrast to the six-thirty (6:30) Christians, the twelve (12:00) o’clock believers were the hyper-spiritual Christians. They were Christians whose focus was all heavenly all the time and would want little to do with this temporal world. The things of this world were not their concern. All they cared about was making sure they pleased God and made Heaven.
As you can imagine, this Heaven-focused mindset pitted the twelve (12:00) o’clock Christians against other Believers. Derisively, they were described as being so heavenly minded that they were earthly no good. Still, the twelve (12:00) o’clock couldn’t care less. All they did was to look at their mockers with pity.
Twelve-Thirty (12:30) Christians
The third group of College Christians were the twelve-thirty (12:30) Believers. These folks, and the next group, were the straddlers who had one leg planted in the world and one leg planted in Heaven.
While twelve-thirty (12:30) Christians had a semblance of Heaven’s consciousness, they are, in comparison to the twelve (12:00) o’clock Christians far more preoccupied with earthly things. They are mostly carnal but, from time to time, they appear to show a little bit of concern about their eternal destiny. You could say their taste for temporal stuff overshadowed their desires for the Heavenly realms.
Six (6:00) O’clock Christians
The fourth and final category were the six (6:00) o’clock Christians. These were the people often referred to as the balanced Christians. For these folks, heaven seemed to be a priority. However, since they were still very much on the earth, they devoted their attention to earthly things as well. So, as these folks pursued heavenly things, they did not do so to the neglect of their earthly affairs.
Unlike the twelve-thirty (12:30) Christians, though, eternal pursuits superseded their temporal commitments. They find the sweet things of the world irresistibly appealing. Since they want to prosper, they preach prosperity. Health, wealth, and success was a message they fully embraced.
Most College Christians of that time fancied themselves as six (6:00) o’clock Christians. In their mind, they were spiritual but rational, fervent but practical, zealous but sensible. They were committed to the faith and desirous of making Heaven but believed that as long as they were on this earth, they had to partake of the fullness it brought. So, they tried to carefully thread the needle between living in the world and being part of the world.
Next time, we’ll examine who of these four groups got it right.