WHERE THERE IS NO VISION, THE PEOPLE PERISH 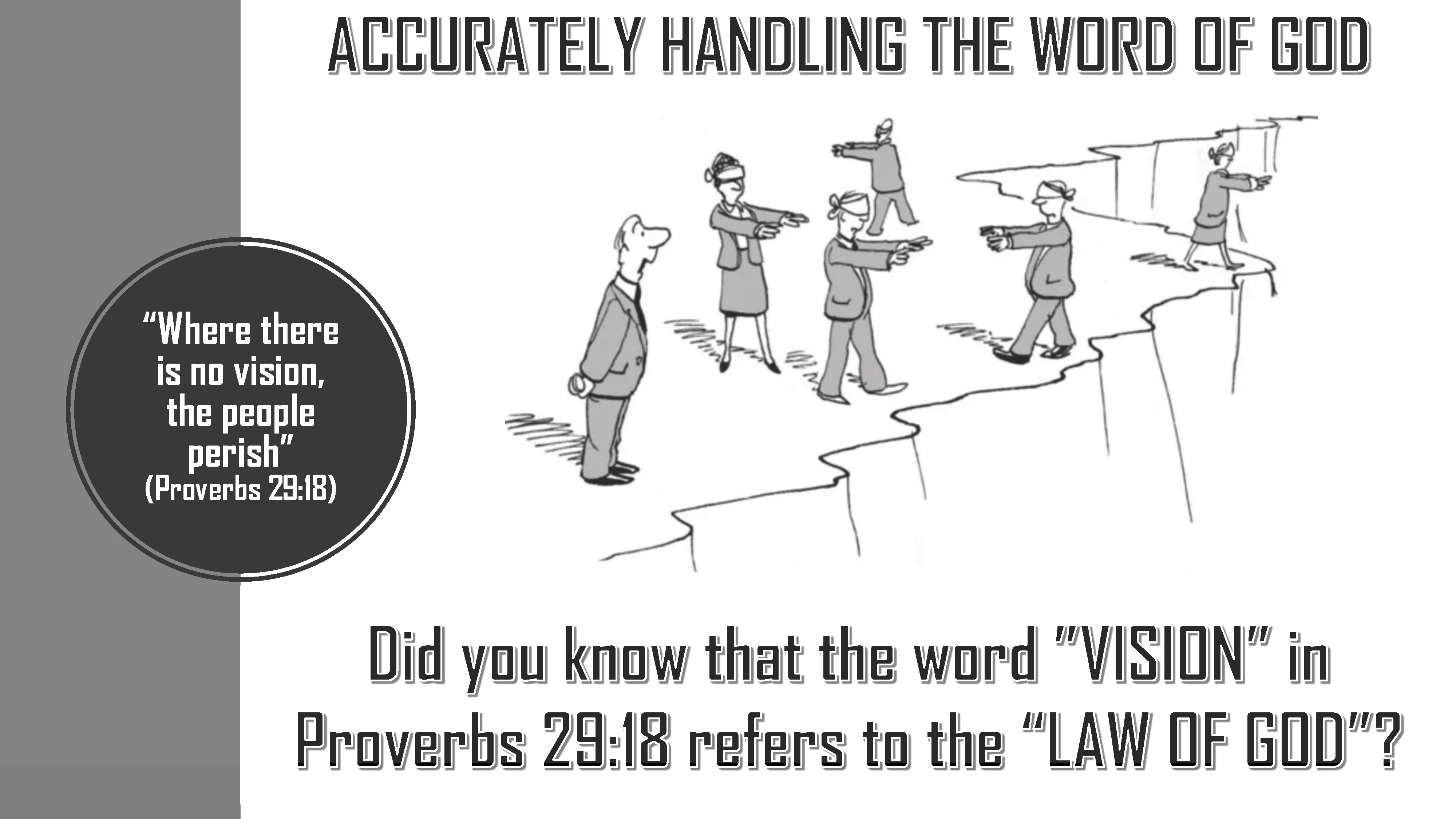 By Akin Ojumu
Christianity is under persistent Satanic onslaught. This assault comes in diverse ways, from different directions, and on several fronts. One of Satan’s most successful strategies in this raging war has been the misinterpretation of Scripture that’s so commonplace in the Body of Christ.
Satanic forces have achieved great feats in this internecine war by firing their weapons of mass spiritual destruction at the very foundation of our Belief and by corrupting the lifeblood of our faith. Some of the products of the erroneous interpretation of Scripture are the false doctrines, erroneous beliefs, and heretic customs and practices that have become so widespread in the Church.
In this commentary, I’m just going to focus on one of the several passages of Scripture that has been erroneously interpreted. And I'm referring to Proverbs 29:18.
“Where there is no vision, the people perish...”
There are those who interpret Proverbs 29:18 to suggest that the passage is talking about the importance of having vision, which is here defined as a futuristic mental image of an organization, a direction towards desired goals or preferred destination.
Based on that interpretation, Proverbs 29:18 is commonly used to stress the importance of ambition, purpose, proper planning, and adequate preparation for the future. Organizations of all shades and stripes have adopted the passage to teach their people not to go about with a chaotic, go-with-the-flow, laissez faire attitude to life.
Now, all of that is a good thing. There’s absolutely nothing wrong in having a vision and a purpose. A well thought out plan for the future is necessary to accomplish anything in this world. Nevertheless, the “VISION” in Proverbs 29:18 does not refer to vision as the world understands the word, vision.
The word “vision” in Proverbs 29:18 actually refers to the “Law of God.” The passage of Scripture is really talking about the ultimate consequence of a life that flouts the Law of God. God is here letting it be known of the certain destruction coming the way of anyone whose life is characterized by a perpetual mutiny against the Precepts of the YAHWEH.
Proverb 29:18 is a warning of the world of hurt that’s bound to befall anyone who kicks against the goads. This passage is a caution to everyone that a life lived outside of the boundaries of God’s law will eventually come to ruin. That those who choose not to operate within the guardrails of God’s righteousness are destined to, one day, crash and burn.
That this passage is not talking about vision, in the dictionary definition of the word “vision,” becomes obvious when we understand that there are 2 parts to the passage as shown in the full texts below:
“Where there is no vision, the people perish: but he that keepeth the law, happy is he.” (Proverbs 29:18).
The first part addresses the negative (i.e., consequences of the absence of something), while the second part is about the positive (i.e., the benefit of the presence of that same thing).
As we can see, the second part of the passage which talks about the reward of “keeping the law,” contrasts with the downside of not keeping the law,” which is in the first part of the passage. Taken together, the passage becomes clearer. When there are no revealed commands of God’s will, i.e., His Law, the people run unrestrained or amok. Those without the guidance of God’s law will live in debauchery and soon perish.
Let me, at this point, address those who are thinking or asking, “What’s wrong in interpreting Proverbs 29:18 to encourage people to have vision?”
As stated previously, having a vision of the future is a good thing. However, for Scripture to be effectual in the life of a Believer, it must be interpreted accurately. The power in the Word of God lies in the accuracy of its interpretation. When the Scripture is misinterpreted, it loses its power because the true meaning is lost on the recipient of the wrong interpretation. Also, proper application of the Word of God is rooted in proper interpretation. Erroneous interpretation of Scripture always produces faulty application. An application of Scripture derived from flawed interpretation is a fruit of a poisoned tree.
“Study and do your best to present yourself to God approved, a workman who has no reason to be ashamed, accurately handling and skillfully teaching the word of truth.” (1 Timothy 2:15).
There’s nothing more vital to the growth and survival of a Christian than being fed the truth of the Word of God. A believer will not grow beyond the limit of the truth of God that he knows. So, it is critical to correctly interpret, accurately handle, and skillfully teach the Word of God.