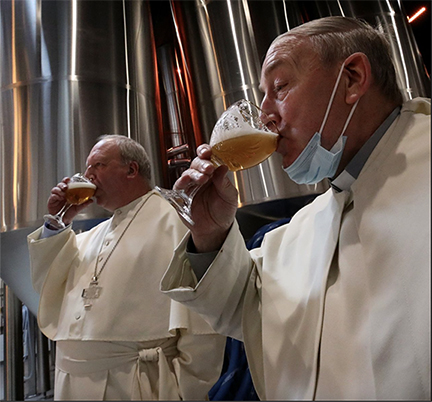 “Let’s Clear the Froth…Oops…the Air”
By Akin Ojumu
Let’s get this straight. Your attitude towards, or opinion about, alcohol consumption is not in any way shape or form a measure of your spirituality. The depth of someone’s Christian piety should not be judged by whether or not that person drinks alcohol.
As a follower of Christ, your Christian spirituality is what you are; your piety is who you really are. What you do, on a daily basis as you live your Christian life for the world to see, is only a manifestation of what you are. Everything you do as a Christian – every habit, every behavior – is simply an outflow, i.e., a reflection of what you are on the inside.
Very early in Christianity, the adherents of the new faith confronted the questions swirling around the permissibility of alcohol drinking by Christians. Because many of the Christian converts were heathens who came out of pagan religions where alcohol consumption was not only a social phenomenon but was also intricately woven into their religious practices as an integral component of their pagan worship, the early Christian Fathers understood the critical importance of erasing any confusion in the minds of the young believers about what their attitude should be with respect to alcohol consumption. At various times and in many of their Epistles to the Christian congregations at that time, alcohol drinking was a subject the Apostles took the time out to address vigorously.
Compared to the Greek language, English is a rather inadequate language. The Greeks are more precise in the words they use to describe all the various and differing expressions of our emotions and feelings. Because of the vastness of their lexicon, the Greeks use many words that correspond to different types of feelings we call love in English. These include words such as Agape, Eros, Erotas, Ludus, Mania, Philia, Philoteknos, Philandros, Philadelphia, Philautia, Pragma, Storge, and Thelos.
As it is with Love, so it is with the word Wine.
When, in this modern time, we try to interpret Scriptures – which were originally written in Hebrew and Greek but translated into English – we always confront the inadequacy of the English language. While there are many reasons why many preach and believe in erroneous doctrines, an important cause of error in Christianity is because the meaning of the Biblical text in the original language in which it was written often gets lost in translation as a result of insufficiency of the English language.
The Bible was not written to people living in the twentieth century. The science – or better, the art – of interpreting the biblical text so that the revelation of God written centuries ago is meaningful and correctly understood today is called “Biblical Exegesis and Hermeneutics.”
Biblical exegesis is the process of discovering the original and intended meaning of a passage of Scripture. On the other hand, the basic premise of hermeneutics is that the question, “What does a passage mean for us today?” must be preceded by the question, “What did it mean for those to whom it was originally written?” If we do not seek first to understand what the text meant when it was written, it will be very difficult to interpret intelligently what it means today.
So, before we can answer the question of the permissibility of alcohol drinking today using Scripture, we must first answer the following questions. Is drinking wine today the same as in Bible times? Or put in another way, is the wine today the same as then?
If you don’t know the answers to those two questions, you are more than likely to misinterpret any Scripture you read about wine and drinking, either to condemn or affirm alcohol drinking.
This is the reason a Christian who really wants to understand Scripture will not simply “read” their Bible. Much more than reading is to “study,” and that involves the tedious work of using all available resources at your disposal alongside the Bible, such as the Strong’s Concordance, Bible Dictionaries, Bible Commentaries, etc., etc. It’s the only way to rightly divide the Word of Truth.
Next time, we’ll explore the different types of alcoholic beverages in Bible times.