THE 911 MASTERMIND BROUGHT TO JUSTICE 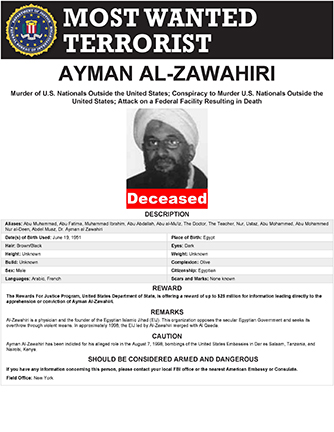 By Akin Ojumu
America never forgets. If you thought that’s nothing but a mere cliché or some cheap self-gratifying slogan Americans like to band about, think again. Regardless of how long it takes, no matter how deep and dark a hole you hide, if you shed American blood, sooner or later, America will make you pay.
Twenty-one years after the horrific 911 terrorist attack, Ayman Al-Zawahiri, the brain behind Al Qaeda terrorist network and the mastermind of the tragic events in New York, Washington, and Pennsylvania, has been killed in a US drone strike on his hideout in Kabul, Afghanistan.
At 9:48 p.m. (New York time), on Saturday 30th of July, a US drone fired two Hellfire – appropriately named, I must say – missiles at Zawahiri as he stepped onto the balcony of a safe house where he had been living with members of his family. Before he could utter the usual, “Alhamdulillah,” the dispenser of terror was blown to smithereens and his remains burnt to ashes. Thus, his safe house was turned into his crematorium because America never forgets.
After a 20-year relentless pursuit, justice was finally brought to the doorsteps – rather, the balcony – of the man responsible for the worst terrorist attack on American soil; an attack that resulted in the slaughter of close to 3,000 people, brought down the World Trade Center Twin Towers in New York, and destroyed the Pentagon.
With the demise of Ayman Al-Zawahiri, the world is a much safer place today than it was a few days ago. Now, the coldblooded murderer can take his rightful place in the hottest part of hell.