I HIT A NERVE WITH AN ISLAMIC FUNDAMENTALIST 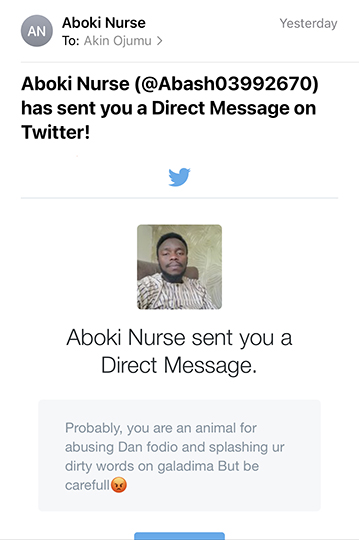 By Akin Ojumu
Yesterday, I did a write-up titled, “Nigerians Must Make the Northern Oligarchs Eat Crow.” It was a commentary that took on Buba Galadima, an NNPP chieftain, for the comments he made in an Arise TV interview where he questioned the patriotism of South-Eastern Nigerians.
In the interview, Galadima was asked to explain the reason his principal, Rabiu Kwankaso, thought the only chance the proposed alliance between NNPP and Labour Party had of winning the presidential election was if a Northerner was at the head of the presidential ticket.
When Galadima was pressed on why Rabiu Kwankaso could not be a running mate to a South-East candidate in the spirit of a new Nigeria, and why it must be a Northerner who must be the presidential candidate, the imperious Fulani, in a peacockery arrogance, responded by suggesting that the Ndigbos are not as committed to Nigeria as the Fulanis.
In the senile mind of Buba Galadima, “there is no South-East candidate that believes in Nigeria as we have worked to develop this new Nigeria we are talking about.”
While remarking on the outlandish statement, I pointed out the irony of the sentiments expressed by Galadima. I thought it was quite comical, coming from a descendant of Usman dan Fodio whose claim to being Nigerian is at best, questionable, and at worst, utter rubbish. Also, I noted that it was outrageous for someone whose foreign ancestry ordinarily should make him an illegal alien in Nigeria to boast he is even more Nigerian than the real Nigerians.
Apparently, Galadima’s kinsmen didn’t take too kindly to my commentary. Considering the threatening messages I received on Twitter from Islamic fundamentalists from Northern Nigeria, I must have hit some raw Fulani nerves. Irked by my audacity, the Northern marauders are really out for my blood this time. They are calling me an animal and warning me I’ll be put down as one.
Just to show a sample, one of the threatening messages came from a guy who goes by the name Aboki Nurse on Twitter. He wrote me and said, “Probably you are an animal for abusing Dan Fodio and splashing ur dirty words on Galadima. But be careful.”
It’s kind of amusing to see the bandits and terrorists of Northern Nigeria freak out at me because I called them out for their sense of entitlement. Just because I dared to remind them that they are nothing but parasites and leeches sucking the lifeblood out of Nigeria, they are calling for my head. They are throwing a fit and billowing fire and brimstone simply because I told them they have contributed nothing to Nigeria other than banditry and terrorism. Showing them the truth of who they really are must taste especially bitter in their kolanut stained mouths.
If they have their way, these Islamic fundamentalists will want nothing more than to bestow on me the same fate as Deborah Emmanuel, the Christian student at Shehu Shagari College of Education in Sokoto, who was murdered by a cowardly mob of Muslim students. The thugs forcefully removed Deborah from the security room where she was hidden by the school authorities, stoned her to death, burnt her body and the building alongside. And what was her offense? She was accused of posting on social media remarks the murderers considered to be a blasphemy against the Prophet Muhammad.
But heck, who cares? The idle threats of Northern moochers mean nothing to me. The oligarchs of Northern Nigeria can blow a gasket for all I care. I’ll never stop calling them out for the ruin and destruction they continue to wrought in Nigeria.