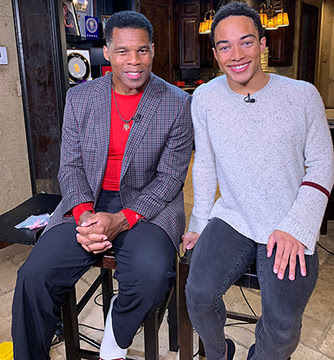 By Akin Ojumu
Christian Walker is Georgia GOP Senate Candidate Herschel Walker’s son. Recently, he posted a TikTok video where he railed and ranted against men who can’t control their ding-a-ling but instead go about sowing their wild oats and fathering multiple children from multiple women all at the same time.
In the TikTok video, Christian “I’m-attracted-to-men-but-I’m-not-gay” Walker’s ire was directed particularly at Nick Cannon whom he claimed is expecting his 9th child and accused of getting two women pregnant at the same time. So, in Christian Walker’s opinion, “Nick Cannon is everything wrong with men in America.”
Now, that’s rich coming from a confused young man whose own father is the epitome of men who cannot control their ding-a-ling. Recently, it was revealed that Christian’s own father, Herschel Walker, fathered multiple children from multiple women, a fact that he has kept from public knowledge until recently when the secret was exposed by the Daily Beast.
The following was how the news that Herschel Walker is another absentee father, in the long list of deadbeats and absent fathers in the ranks of Conservative politicians, was reported in the Daily Beast.
“A day after The Daily Beast broke the news that Herschel Walker had a secret 10-year-old son he fathered out of wedlock, the football star-turned-politician confirmed late Wednesday night that he has yet another son with a different woman that the public doesn’t know about – as well as a daughter that he had in college. The revelations come in the middle of Walker’s competitive race to unseat Sen. Raphael Warnock (D-GA) and after many public comments Walker has made about absent fathers in the Black community.”
Like father, like son. Christian Walker inherited his father’s legendary lack of self-awareness. Otherwise, he’d have learned to first remove the log in his own eyes before pointing to the speck in another man’s eyes. As they say, the apple doesn't fall far from the tree. The act of projection must be a common hereditary trait in the Walker family.
If your dad has recently been outed for being an absentee father who, unable to control his ding-a-ling, fathered multiple children from multiple women – children he abandoned and neglected – you don’t go on social media and put on a holier-than-thou display of righteous indignation against another man who is guilty of the very same offense as your father.
Christian Walker has long established his bona fide as a shameless hypocrite. Here is the same guy who, on one hand, says he is anti-LGBTQ, and opposed to the gay lifestyle, yet, admits he is attracted to, and in love, with men, while vehemently making it known he doesn’t identify himself as being gay.
He even tweeted about this a couple of weeks ago.
“Pride month is starting so I’d like to announce to everyone that I’m NOT gay. I’m attracted to men but I refuse to identify with the rainbow cult. I don’t believe in indoctrinating children. My whole identity isn’t my sexuality. And I don’t go to gay bars. Don’t call me gay.”
The guy is attracted to men, and he loves men. His mannerisms and gestures suggest he is gay. But he goes out of his way to tell the world he is not gay, and that he is fiercely opposed to the gay lifestyle.
With all these conflicting complexities swirling around Christian Walker, one cannot but conclude that the young man is confused and psychologically disturbed. He is more than likely suffering from deep seated and unresolved daddy issues.
https://www.youtube.com/shorts/0lsx4aDG0BU