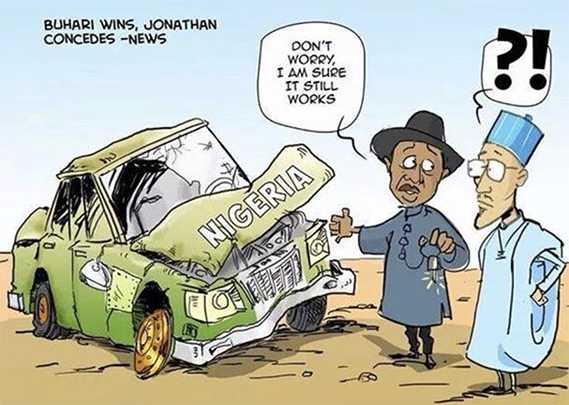 By Akin Ojumu
What’s it about Nigeria that makes it possible for the worst from among the people to continually rise to power? How do the least qualified Nigerians become the country’s rulers? Why do Nigerians allow this to happen?
Dietrich Bonhoeffer, German Lutheran pastor and anti-Nazi dissident, attempted to answer similar questions with regards to the rise of Hitler in Germany. In his Letters from Prison, Bonhoeffer argued that the answer was not malice. He reflected on how sophisticated and highly intelligent people like the Germans could elect a megalomaniacal leader like Hitler and support him in his dehumanizing ambitions of racial purity within Germany, and world domination without.
Bonhoeffer concluded that his fellow Germans didn’t become misanthropic and evil overnight. Rather he blamed it on stupidity – a vice which, according to him, was more dangerous than malice.
Like Nazi Germany, Dietrich Bonhoeffer’s “Theory of Stupidity” can be used to explain the rise to power of Nigeria’s “Ruining Crass.” Bonhoeffer diagnosed Nigerians’ penchant for queuing up behind those who ruin their lives.
Nigerians elect parasites and leeches to office because of their stupidity. To save Nigeria, this stupidity must be understood.
The following are excerpts from Dietrich Bonhoeffer’s Theory of Stupidity.

Stupidity is a more dangerous enemy of the good than malice. One may protest against evil; it can be exposed and, if need be, prevented by use of force. Evil always carries within itself the germ of its own subversion in that it leaves behind in human beings at least a sense of unease.
Against stupidity we are defenseless.
Neither protests nor the use of force accomplishes anything here; reasons fall on deaf ears; facts that contradict one’s prejudgment simply need not be believed – in such moments the stupid person even becomes critical – and when facts are irrefutable, they are just pushed aside as inconsequential, as incidental.
For that reason, greater caution is called for than with a malicious one. Never again will we try to persuade the stupid person with reasons, for it is senseless and dangerous.
If we want to know how to get the better of stupidity, we must seek to understand its nature. This much is certain, that it is in essence not an intellectual defect but a human one. There are human beings who are of remarkably agile intellect yet stupid, and others who are intellectually quite dull yet anything but stupid.
We discover this to our surprise in particular situations. The impression one gains is not so much that stupidity is a congenital defect, but that, under certain circumstances, people are made stupid or that they allow this to happen to them.
The process at work here is not that particular human capacities, for instance, the intellect, suddenly atrophy or fail. Instead, it seems that under the overwhelming impact of rising power, humans are deprived of their inner independence, and, more or less consciously, give up establishing an autonomous position toward the emerging circumstances.
The fact that the stupid person is often stubborn must not blind us to the fact that he is not independent. In conversation with him, one virtually feels that one is dealing not at all with a person, but with slogans, catchwords and the like that have taken possession of him.
He is under a spell, blinded, misused, and abused in his very being. Having thus become a mindless tool, the stupid person will also be capable of any evil and at the same time incapable of seeing that it is evil. This is where the danger of diabolical misuse lurks, for it is this that can once and for all destroy human beings.
Yet at this very point it becomes quite clear that only an act of liberation, not instruction, can overcome stupidity.
Here we must come to terms with the fact that in most cases a genuine internal liberation becomes possible only when external liberation has preceded it. Until then we must abandon all attempts to convince the stupid person.