BOLA TINUBU IS A MIDDLE FINGER TO NIGERIAN YOUTHS 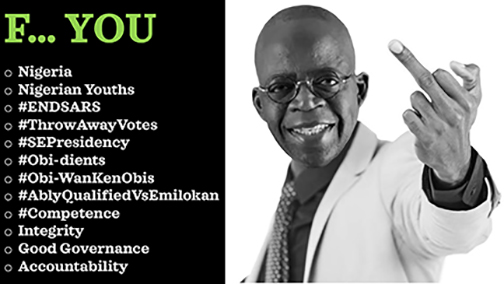 By Akin Ojumu
By putting at the head of its ticket for the next presidential election the Asiwaju Ibaje of Lagos, the All-Progressives Congress (APC) has just told Nigeria’s next generation that whatever grievance they may have against the ruling elite is of no concern to them. In total disregard for the fear and concern they may have for their future, Nigeria's political noblesse has, in no subtle way, sent a signal to the youths that they couldn’t care less.
This bloated congress of power drunk cabals, overfed plutocrats, and perennial political candidates, by picking Bola Tinubu as its candidate in the 2023 presidential election, has given the middle finger to the nearly 34 million restless youths of Nigeria.
It’s an ear deafening F--- YOU! If you thought that’s a hyperbole, your head must be stuck so far up your behind, all you can smell is the BS you are being pumped into you.
At such a critical time in its history, when Nigeria is in desperate need of a dynamic leader with bold aspirations and audacious vision that could potentially transform the country in a breathtaking degree both in scale and vision, the APC decided to go for Bola Tinubu, a man whose only rationale for wanting to become Nigeria’s president is that it is now his turn.
Newton's First law states that, “A body continues in its state of rest or of uniform motion along a straight line unless it is acted upon by some external force to change the state.”
The sooner the youths of Nigeria wake up to the realization that the recycled old men ruling their land will never relinquish power without a fierce and bruising fight, the better for them and their future. The youths will be making a catastrophic mistake if they expect these leeches and parasites, who have their fangs sunk deep into Nigeria’s lifeblood, to simply pack it up and quit.
There’s no one, anywhere, who after tasting so much absolute power for this length of time, that gives it up easily without being compelled to do so by an external opposing force. To change the trajectory of their nation, the children of Nigeria have got to rise up and put up a fight. When somebody gives you a middle finger, you know exactly what to do. Now is the time to do something earth shattering.
Since its independence more than 60 years ago, Nigeria has had its fair share of terribly awful rulers. Ever since I’ve been old enough to be aware of what's going on around me, there has never been a time when Nigerians could honestly, categorically, unequivocally say they had a good leader.
Over these many years that Nigerians have been self-governing and the architects of their own destiny, the country has gone from the fry pan of horrendous leaders to the crucible of abhorrent rulers; perpetually trading one bad ruler for an even much worse one.
Of the countless numbers of totally unqualified and clueless candidates that have been fielded by political parties to vie for the office of the president of Nigeria, none has touched my nerves as much as Bola Ahmed Tinubu has.
The opposition I have towards this man’s candidacy is visceral and pretty raw. The real possibility that a man like Tinubu – a pathologically greedy soulless narcissist – can one day become the President of Nigeria much more than petrifies me; the idea of it repulses me greatly.
There’s no smaller package than a man wrapped up in himself. Bola Tinubu is a man of monumental smallness who’s totally ensconced within the bubble of his rapacious avarice and selfish ambition. Electing him president is like condemning Nigeria to a death sentence.
It is for these reasons that Nigerian youths must unite and fight. To take their country back, concerned Nigerians, irrespective of age, tribe, religion, or socioeconomic status, must step out of their comfort zones, enlist in the Obi-dient Army, and prepare for war. The only way Nigerians are ever going to defeat Bola Tinubu and get rid of this deadly scourge from their country is by becoming Obi-Wan KenObi foot soldiers.
This fight, this war, is not physical. It is about the youths getting more engaged in the democratic process and quit being aloof to their civic responsibilities as citizens. The youths must register to vote by getting their PVCs. They must actively canvass for votes and must cast their votes in elections for the candidates that best represent their interests. Lastly, they must sensitize others to do the same.