BEING OBI-DIENT TO THE MOTHERLAND 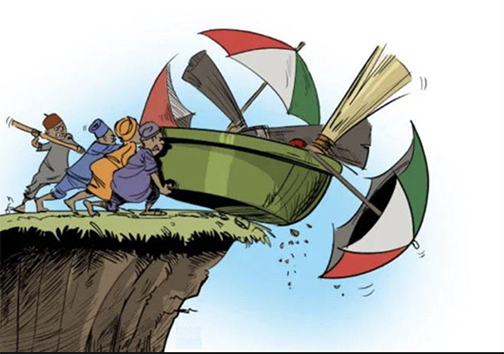 By Akin Ojumu
Three years ago, Mother Nigeria engaged in an illicit sexual intercourse with unfaithful paramour without using protection. In the 2019 presidential election, the motherland willingly opened up herself to a Viagra-laden senile lover who saw in her a mere object to satiate his inordinate pleasure.
In that election, Mother Nigeria, as usual, willingly surrendered her chastity to barbaric defilers and thrill seekers. For the umpteenth time in the nation’s history, the matriarch of our destiny was ravaged by savages who debased her like a woman of no virtue. She gave her consent to be taken advantage of by men of evil intent.
Unlike the other times in the past when she allowed herself to be easily molested without putting up much of a protest, however, the last episode stung bitterly. The shame of her actions weighed heavily on her guilty soul like a ton of bricks.
What made the last frolicking more painful than previous occasions was that three of her children witnessed the entire tragedy as it unfolded. She was heartbroken because her children were spectators in her debauchery. They watched as she was gang raped and they couldn’t come to her rescue.
Consumed with their selfish ambition, the young children of Mother Nigeria – represented by Omoyele Sowore (AAC), Fela Durotoye (ANN) and Kingsley Moghalu (YPP) – stood there and watched as the motherland was ravaged again and again and again. Intoxicated by their own egos, these young children of Nigeria – who, hitherto, were considered the hope of the nation – allowed their mother to be desecrated.
For some inexplicable reasons, the magnitude of the moment in the nation’s history seemed lost on these young children of Nigeria. As political neophytes, just being in the political heavyweight bout appeared to suffice. Blinded by the bright light of attention, they failed to see that the battle was much bigger than anyone’s individual ambition.
Unaccustomed to the limelight, their presidential ambition became a farce, their campaign looked like a gimmick, and their running seemed a cruel joke. They each were content to be regarded as “Presidential Candidates”, and they derived enormous pleasure in being called “Presidential Aspirants.
By the time they came to the realization that their solo efforts were quixotic misadventures that would not yield the desired results, it was too late. Yet, instead of swallowing their pride and making a strategic adjustment, they decided to plow ahead alone anyway, thinking they could make the best out of a no-win situation. From that point forward, their single source of thrill was to see their name on the ballot box; it was an elixir of vindication of having arrived in the league of big boys, it seemed.
Another presidential election is here again. Unless there is a re-examination of the failures of the youth in the last election cycle, history is bound to repeat itself. Failing to embark on a critical re-assessment of what happened three years ago, Nigerian youth will once again pimp their motherland to the highest bidder.
Nigerian youth cannot afford to let history repeat itself. It’ll be a colossal mistake if they fail to wake up from their slumber and join hands with one another. Failure to unite behind a candidate that’s right this time around will amount to political suicide. The consequences of a defeat for Nigeria in the 2023 election will reverberate far into the distant future. And there’s a good chance that such a defeat will result in a fatal injury from which Nigeria may never recover.
The war for the soul of the nation rages. To save Nigeria from defeat, the youth of the nation must be Obi-dient to the Motherland. If they want to have any future at all, they must band together by enlisting in the Army of the Obi-dients. Only then will Nigerians succeed in kicking the defilers of their Motherland over the cliff.