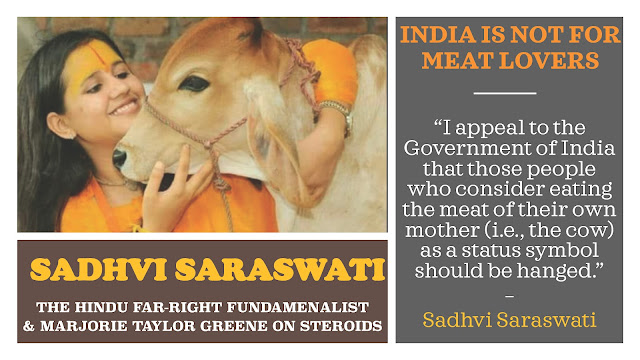 By Akin Ojumu
A deadly strain of Hinduism has taken root in India. This deadly extremist religious virus is spreading fast and furious among the Indian population. With the government standing by and doing nothing, Indian minorities belonging to other religious groups, especially Muslims and Christians, are being indiscriminately targeted by Hindu far-right extremists. In a bid to Make India Hindu Again, lynching and killing of non-Hindus have become commonplace and a worthy cause.
The ruling political party, Bharatiya Janata Party (BJP), is a far-right political party. Under the leadership of the current Prime Minister, Narendra Damodardas Modi, the BJP has adopted Hindutva (or Hindu nationalism) as its political ideology and the recreation of a lost Hindu kingdom, aka the Hindu Rahstra, its ultimate political goal.
As a footnote, Hindutva isn’t exactly the same thing as Hinduism. As Arvind Sharma described it in his paper titled “On the Difference Between Hinduism and Hindutva:”
“Hindutva has been variously described as ‘Hinduism on steroids,’ or ‘Hinduism which resists,’ or ‘an illegitimate child of Hinduism.’ A preliminary way of understanding the difference between Hinduism and Hindutva would be to recognize that Hinduism is a religion while Hindu nationalism, or Hindutva, is a political ideology, whose relation to the religion of Hinduism could be considered analogous to the relationship between Christianity and Christian fundamentalism or Islam and Islamic fundamentalism.”
Since taking power in 2014, the BJP has been promoting and championing Hindutva, the Hindu nationalist supremacy ideology. Christians and Muslims, who are in the minority in the country, are now facing the greatest threat to their existence like no other time in the history of the Indian nation, and the likelihood of a full-blown genocide is no longer considered a figment of wild imagination.
In recent years, hate crimes against minorities in India have reached stratospheric levels. Muslims have been hacked to death as their attackers chanted anti-Muslim slogans. Leading voices on the far-right Hindu nationalist movement have called for the raping and killing of non-Hindus who eat cow meat. Reminiscent of the Rwandan genocide where the majority Hutus considered the Tutsis minorities cockroaches, high-level government officials have at various times described migrants from neighboring countries as termites and lawmakers from ethnic minorities as green virus. Put together, these occurrences set the stage for a major pogrom if not nipped in the bud.
The face, and voice, of the far-right Hindu nationalist movement in India is Sadhvi Saraswati. This is a barely educated 25-year-old controversial figure who is popular on the Hindu nationalist speaking circuit. Having attained, at the age of 12, the title of ‘Sadhvi Deeksha’ – i.e., a religious ascetic, mendicant or a holy person in Hinduism who has renounced the worldly life – Saraswati is revered as a religious guru.
Considered the India’s Marjorie Taylor Greene, Sadhvi Saraswati entered public life as a trainee and member of the Rashtriya Sevika Samiti, the women’s arm of the Rashtriya Swayamsevak Sangh (RSS), which is a far-right, Hindu nationalist, paramilitary volunteer organization. She subsequently gained prominence as a leader of the Vishwa Hindu Parishad (VHP), a right-wing organization that promotes Hindutva.
Noted for her provocative speeches, the far-right firebrand is at the forefront of the fight for the Hindunification of India. Ms. Saraswati considers the cow a sacred animal, has compared the eating of cows to eating one’s own mother, and once called for the public hanging and execution of meat eaters.
In her remarks at the inauguration of a four-day All India Hindu Convention a few years ago, Saraswati bemoaned the widespread disregard for the sacredness of cows in India and called on the Indian government to execute anyone found eating cow meat. “I appeal to the Government of India that those people who consider eating the meat of their own mother (i.e., the cow) as a status symbol should be hanged. They (those who eat beef) should be brought before the public and hanged, then only will people know that it is our duty to protect ‘gau mata,’” she said to thunderous cheers and applause from the audience.
Statements like these are warning signals that genocide is brewing in India. Yet, the rest of the world seems disinterested and unperturbed by the coming explosion of a global humanitarian catastrophe that’ll hit the world with the force of a category 5 hurricane. The hegemonic push by the far-right Hindu nationalists to force on all Indians the customs and practices of Hinduism runs the risk of upending the tenuous balance that has existed for so long in this multi-religion, multicultural, multilingual nation of close to 1.5 billion people. When this dam breaks, the resulting flood will drown us all.