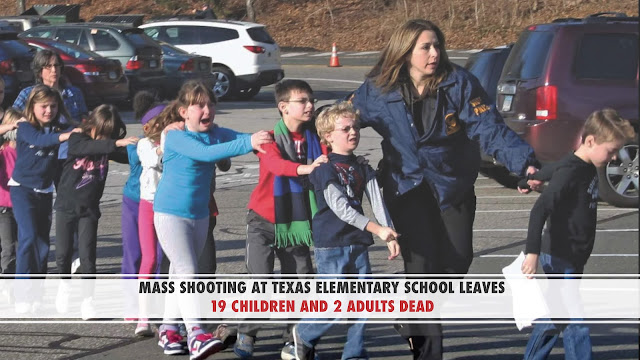 By Akin Ojumu
Another day, another mass shooting. What else is new? This time around, the killing spree was at Robb Elementary School in Uvalde, Texas. A gun man – a gun kid, really – walked in and opened fire instantly killing nineteen (19) children and two (2) adults.
It’s the deadliest shooting at an elementary school since the 2012 devastating attack at Sandy Hook Elementary in Newtown, Connecticut which claimed the lives of twenty children (between six and seven years old) and six adult staff members.
Motive? Search me!
It’s just another day in the paradise of mass shootings and bloodletting, called the United States of America.
These senseless killings have become so commonplace, the American public has become numb to the incessant tragic shedding of innocent blood and the response of the their political leaders is by now quite typical and predictable.
Especially gnawing, though, is the attitude of the dimwits of the Pro-God and Pro-life cycle to this reckless destruction of lives. Following the news of another mass shooting, the Pro-God, Pro-life knuckleheads:
(1) Dismissively shrug their lumpy shoulders and ruby red necks
(2) Uninterestingly let out a big yaaawwwnnn
(3) Perfunctorily send out bouquet of “Thoughts and Prayers” ornamented with pointless platitudes and empty clichés
(4) Impetuously declare that guns don’t kill people, only bad people with guns kill people
(5) Petulantly proclaim that the only way to stop a bad guy with a gun is a good guy with a gun
(6) Stubbornly insist on arming all teachers and pupils with AR-15s and AK-47s
(7) Vehemently argue for the inalienable right to bear and own as many guns of any size and rounds as desired
(8) Confidently guarantee to block and shoot dead any gun safety legislation proposed by the godless liberals in Congress or elsewhere
(9) Bitterly complain about liberals wanting to take away their guns
(10) Continuously whine that the godless Liberals and the mainstream – aka lame-stream – media are politicizing the shooting and making a mountain out of a molehill
(11) Stridently point accusing fingers at the undocumented immigrants invading America from the Southern border as the culprits in the mass shooting
(12) Repeatedly blame the Pro-abortion, Pro-Gay, Black Lives Matter Movements for the mass shooting
(13) Quickly pass laws in Republican controlled State legislatures to further water down existing gun laws to strip away any and all restrictions
(14) Synchronously repeat the talking points on Fox News and other Conservative lies & news media that what the real Americans need in their lives are more guns and what they surely don’t need are the godless Liberals and their progressive agenda which is “destroying” America
(15) Silently play the waiting game like patient dogs
(16) Expectedly allow the hoopla of the current mass shooting to die down and for Americans, with their alarmingly short attention span, to move on to the next big thing in the fast spinning news cycle
(17) Triumphantly ensure nothing gets done to reduce gun violence and no tangible action is taken on gun safety
Until the next mass shooting…
And the cycle of death repeats itself.
You bet, there’s a mass shooting coming to an elementary school, a grocery store, a house of worship, or a movie theater near you.
Clinging to guns, which are worshiped as gods, is what it takes to be Pro-God and Pro-Life in America.
Welcome to Crazy Town, USA.