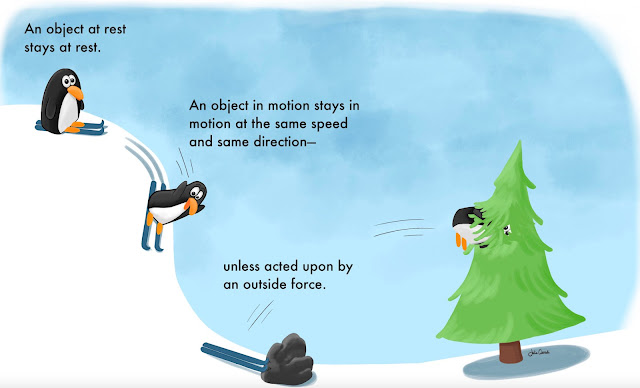 “The Beatitudes and Newton’s First Law of Motion”
By Akin Ojumu
In High School, Physics was one of those subjects I had a love-hate relationship with. On the one hand, I loved physics because it fascinated me. At the same time, I hated the subject because I was never good at it. Oddly enough, there are a few things I still remember, to this day, from the physics class. One of them is Newton's Laws of Motion. That’s probably because I had a good physics teacher, who drilled these lessons into our minds.
Newton’s First Law of Motion states:
“Every object continues in its state of rest or of uniform motion unless compelled by an external force.”
That is to say, an object at rest will remain at rest, and an object in motion will remain in motion at constant speed and in a straight line unless acted on by an unbalanced force. This tendency to resist changes in a state of motion is called inertia.
As I was ruminating on the Sermon on the Mount – which is, perhaps, the greatest sermon ever preached – Newton's First Law of Motion popped into my mind. If you’ve managed to read up to this point, you’re probably wondering what Newton’s First Law of Motion has got to do with the Sermon on the Mount. The answer is a lot, and you’ll see it shortly.
When Jesus burst into the scene 2,000 years ago, He stepped into a society whose way of life was steeped in tradition and whose customs were deeply rooted. The people had a regimental social construct, and they operated under a highly systematized religious paradigm. There were rules and regulations for everything, and everyone was familiar with the way things were. Their lives were moving along, as it were, according to Newton’s First Law of Motion. You can say, they were in a state of inertia.
Then the Lord walked into the scene, and He threw a monkey wrench into the works. Jesus was the external force that compelled them to change their state of rest or uniform motion. His coming shattered the inertia and His message pulled the soft feathers from their cushy nests. The Son of God overturned their system of religious beliefs and practices, upended everything they knew about God, and He dismantled their prescription for right standing with God.
In the declaration of the manifesto of His monarchy, the King of Kings drew a sharp contrast between the principles of the Kingdom of God and the wisdom of men. Jesus laid down a set of standards for godly living that was revolutionary and pretty high. Again and again, at various points in His sermon on the Mount, the Lord would say, “You have heard that it was said…,” only to be followed immediately by, “But I say to you…”
“For I tell you, unless your righteousness exceeds that of the scribes and Pharisees, you will never enter the kingdom of heaven.” (Matthew 5:23).
Jesus presented the principles of God’s kingdom that conflicted with the established notion, and He introduced standards of righteousness that confounded their understanding. When Jesus spoke on the hillside that day, he caused not a little stir in the hearts and minds of His listeners. John MacArthur described it this way:
“Jesus called for things that were absolutely foreign to their thinking. They knew how to be spiritually proud. They knew how to be self-sufficient. They knew how to play the pious role. They knew about religion. They were really good with form. They thought they were the “in” group. They thought they could survive on their own strength and their own wisdom and their own might and their own resources.
“And they expected the Messiah, when he arrived, to say to them “I’m here to commend you for your great religiosity. I’m here to commend you for your wonderful spirituality. I’m here to announce to you that God has looked down from heaven and he’s very well pleased with you. In fact, we can just go right on into the kingdom. Very little change is necessary.”
“But our Lord opened up his ministry to them and said this in Matthew 5:3, “Blessed are the poor in spirit for theirs is the kingdom of heaven.” Not those who think they’re righteous, but those who know they’re sinners.”
Next time, God willing, we’ll examine the 9 “Blesseds” of Matthew 5:3-11, one at a time, to really understand what the Lord was saying to the people gathered around Him on the hillside on that fateful day.