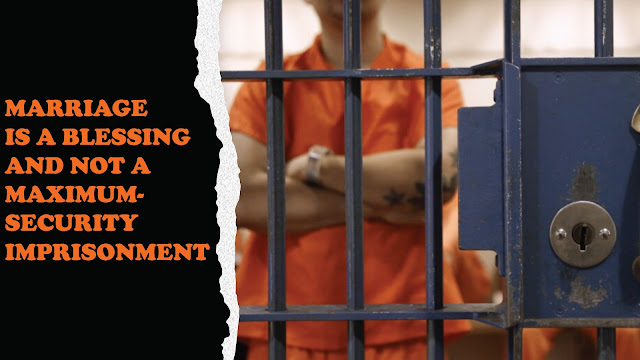 “Marriage is a Blessing and not a Life Sentence in a Maximum-Security Prison”
By Akin Ojumu
In Matthew 19:1-12, our Lord Jesus reiterated God’s original intent for marriage. In broad strokes, He painted a picture of the type of marriage that is pleasing in God’s eyes. It was an overarching framework for marriage in an ideal situation.
Luckily for us, God did not leave the question of marriage and divorce hanging on just what we have in Matthew 19:1-12. Because this is a subject near and dear to God’s heart, He inspired men like Paul to take the picture Jesus painted, expound on it, and apply it to the not-so-ideal marital situations that existed in our sinful world.
In his letters to the churches, it was obvious that Paul preferred celibacy. He’d rather that people remained unattached like himself, and thus free to serve God without the encumbrances of marriage and the responsibilities of family. Yet, he never forced his preference on anyone. Paul was mindful that not everyone had the grace for singleness and not everyone could exercise self-control and not fall into sexual sin.
So, in his letter to the Corinthian Church, in 1 Corinthians 7, Paul counseled the unmarried (i.e., those who were divorced prior to coming to Christ and were now singles as Christians), widows (i.e., those who were singles as a result of the husbands’ death), and virgins (i.e., those who had never before married), to get married instead of burning with lust and spending every single day fighting the temptation of the flesh. To the Christians who were already in marital relationships, Paul instructed them not to divorce their spouses. Should anyone ignore this counsel and chose to divorce, such a person was to either remain unmarried or reconcile with the spouse.
For those in marital-discordant situations, i.e., those in mixed marriages where one partner was a believer and the other was not, Paul instructed the Christian partner not to divorce the unbelieving spouse if the unbeliever consents to remain in the marriage. But if the unbeliever wants to leave, Paul told the believer not to fight to keep the unbeliever from leaving. In this case, the believer could remarry because he was no longer bound to the marriage. This, Paul said, was because God has called us to peace.
In this context, we defined a Christian as someone whose life was surrendered to God and had the Holy Spirit dwelling in him. We made the point that an abusive spouse is an unbelieving spouse. A man who lifts his fist against his wife is not a Christian and certainly not under the influence of the Holy Spirit. The woman who runs her husband down with her mouth and makes him feel less than a man isn’t a believing spouse either.
This commentary also discussed the Jesus’ dialogue with the Pharisees who came to tempt Him by asking if he thought it was lawful for a man to divorce his wife for any reason whatsoever. We saw how the Lord told the holier-than-thou religious men that God did not approve of their “Any Cause” divorce. Jesus reaffirmed God’s original intent for marriage, letting them know that it was a God’s ordained institution. And that when a man and woman came together in holy matrimony, God was at work behind the scenes orchestrating things and the union thus formed was holy before God and must not be broken.
Jesus went on tell them that sexual immorality remained the only ground for which divorce was permitted by God. Consequently, all the certificates of divorce obtained under the “Any Cause” were null and void in the eyes of God. Anyone who divorced his wife under “Any Cause” and then married another woman was not only committing adultery, but the woman he married was guilty of adultery also.
Over the years, there are many who have erroneously interpreted Scripture to promote the doctrine of “no divorce under any circumstances”. Lacking an accurate understanding of the context, some pastors use Matthew 19:9 to trap believers in toxic and abusive marriages which, in certain instances, have ended in the tragic death of the abused spouse. The death of Osinachi Nwachukwu is a case in point.
It’s high time that those who are shepherds over God’s flock swallowed their pride and went back to the Bible. They must humbly re-examine what they know, re-evaluate what they teach, and repent of all erroneous doctrines and poisonous practices that conflict with the Word of God.
Marriage is a blessing of God and it’s supposed to be maximally enriching and fully enjoyable. It isn’t a life sentence in a maximum-security prison.