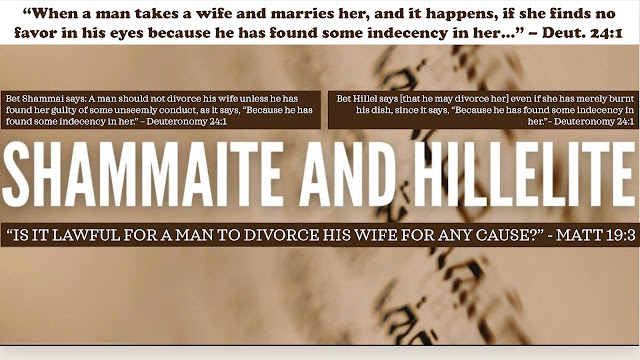 “When a Man Takes a Wife and He Finds Some Indecency in Her”
By Akin Ojumu
Just as it is with the doctrine that equates celibacy to godliness, so it is with the “Any Cause” Divorce. They both derive nourishment from the poisonous stream of erroneous interpretation of Scripture. Distortion of the Word of God is the common thread that runs through all false religions. Misinterpretation of Scripture is the cornerstone of all erroneous religious practices.
Last time, we established the fact that the Hillelite Pharisees invented the “Any Cause” Divorce. It was an instrument of divorce they created to accommodate and legitimize the decadent behavior of sinful men. This divorce decree made it easy for a Jewish man to dump his wife for another woman under any pretext.
Under the Law of Moses, there was only one ground for divorce, and it was on the ground of sexual immorality. But because the Law was incapable of banishing sin from the human heart, the Jews always looked for loopholes in the Law to accommodate their sinful ways. And when they couldn’t find one, they invented it.
The Any Cause divorce was the distortion and misinterpretation of Deuteronomy 24:1-4:
“When a man takes a wife and marries her, and it happens, if she finds no favor in his eyes because he has found some indecency in her, that he writes her a certificate of divorce, puts it in her hand, and sends her away from his house...”
This was a specific instruction that prohibited a man from remarrying a woman from whom he had earlier divorced for reasons other than adultery, if that woman had gone to marry another man. Yet, the Hillelites took this instruction and interpreted it as a command to a man to give his wife a certificate of divorce if he found “any indecency” in her.
In Hebrew, the word “indecency” means “any defect found in a woman.” It is also a word that means the “nakedness of a thing” i.e., improper behavior, something vile, dirty, shameful, unbecoming of a woman, or embarrassing.
According to the Hillelites, any indecency was a legal ground for a man to divorce his wife, and the specific indecency can be anything the man considered to be indecent. If the wife burnt the food, it was indecent; if she served the milk cold instead of warm, it was indecent; if she chewed out loud, it was indecent; if she was seen talking to other men, it was indecent. For any of these flimsy excuses, the woman could lose favor in the eyes of her husband, get slapped with a certificate of divorce, and the man could go and marry another woman. This type of divorce came to be known as the “Any Cause”.
As time went on, it became the most popular divorce instrument among the people because of the ease with which it could be obtained. And this was the context in which the encounter between Jesus and the Pharisees occurred in Matthew 19:1-12.
The question they wanted Jesus answered was whether He was in favor of the “Any Cause” Divorce. They deliberately asked knowing that if He answered in the negative, the crowd would turn against Him. It was also their intention to get Jesus to say something that would give Herod Antipas, who was the ruler at the time, to arrest, imprison, and behead Him.
As you may recall, Herod Antipas himself was, at this time, in an adulterous relationship with Herodias, his brother Philip’s wife. This was the same Herodias who prompted her daughter, Salome, to ask for the head of John the Baptist on a platter because John had condemned her adulterous marriage. The Pharisees were hoping Jesus would say something incriminating that they could take to Herod who would then subject Him to the same fate as John the Baptist.
Instead Jesus answered and said:
“Have you not read that He who created them from the beginning made them male and female, and said, ‘for this reason a man shall leave his father and his mother and be joined to his wife, and the two shall become one flesh’? So they are no longer two, but one flesh. Therefore, what God has joined together, no person is to separate.” (Matthew 19:4-6).
In His answer, Jesus pointed their attention to God’s original intent for marriage. He told them it was God who brings a man and a woman together in a holy union sealed by a covenant that must not be broken. He reminded them that it was because of the hardness of their hearts that Moses permitted divorce on the ground of sexual immorality in the first place.
Jesus concluded by circling back to their original question which was whether He considered the “Any Cause” Divorce lawful:
“I say to you, whoever divorces his wife, except for sexual immorality, and marries another woman commits adultery.”
The Lord was telling these holier-than-though religious men that God did not approve of their “Any Cause” divorce. He reiterated that sexual immorality remained the only ground for which divorce was permitted by God. Consequently, all the certificates of divorce obtained under the “Any Cause” were in effect null and void in the eyes of God. Anyone who divorced his wife under “Any Cause” and then married another woman was not only committing adultery, but the woman he married was guilty of adultery as well.