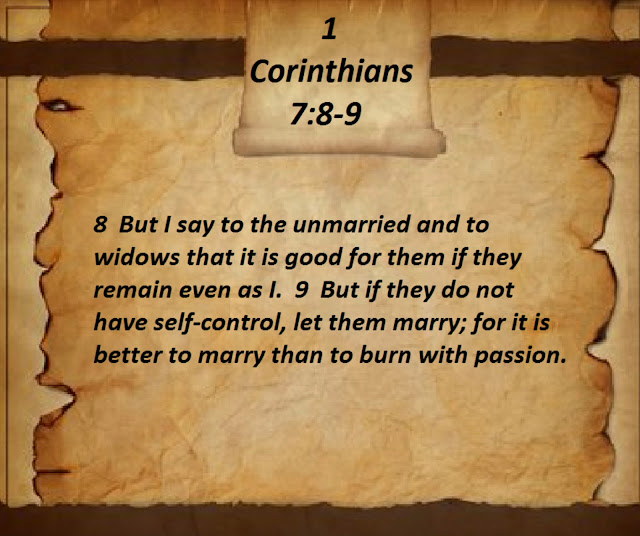 “To the Divorced Person, Better to Marry Than to Burn with Lust”
By Akin Ojumu
Fundamental to the role of the Pastor is the obligation to teach the truth of the Word of God. In fact, there is no greater responsibility the shepherd of God’s flock has than to feed God’s sheep with God’s Word. It's in the diligent fulfillment of this important task that the people of God are brought to maturity in the Lord, measuring up to the full and complete standard of Christ.
The primary objective of the Pastor is to bring people to a point in their conscious mind where they are submissive to the Word of God, where they believe that the Bible is the infallible, authoritative, inerrant, holy Word of God. If I as a pastor can just get people to make a general commitment to the authority of the Word of God, then you can introduce any principle out of the Word of God, and they are bound by their heart's commitment to abide by it (John MacArthur).
This mindset is exemplified by Apostle Paul in all his epistles to the various churches in the New Testament. The man was the consummate teacher of the Word with the heart of a shepherd. As a quintessential pastor, he used every opportunity he could find to feed the people whom God had put under his watch with the God’s Word. His letter to the Corinthians is one of such instances.
Having answered the questions the Corinthians had about celibacy in general and celibacy within the marriage, Paul now turned his attention to their concern about what to do with 3 categories of women in the church who were at this time not married.
As discussed last time, the Corinthian congregation consisted of a league of extraordinary screw ups who had become saved trying to live as Christians. Before coming to Christ, however, many of them were in marital situations and relationships best described as “really messed up.” But now that they were born-again, the question facing the church was what to do with those relationships.
For today’s commentary, we are going to discuss Paul’s counsel to the Corinthians on what to do with the 3 categories of women in the church who weren't married. These were the:
Unmarried – 1 Corinthians 7:8, 11, 32, and 34
Widows – 1 Corinthians 7:8
Virgins – 1 Corinthians 7:25, 28, 36, 37, 38
The Corinthians wanted to know whether or not these women should get married. In order to understand Paul’s response to their question, it’s important to first explain what these 3 terms, i.e., unmarried, widows, and virgins, actually mean.
Within the context of 1 Corinthians 7, the unmarried refers to women who became single by virtue of a divorce. Before they became Christians, these women had left their husbands. In fact, some of them might have gone through multiple marriages and divorces. But at this point, as believers, they were not married, and they belonged to the singles group in the Church. Considering they were divorced from their husbands, the Church sought Paul's guidance on whether they should be permitted to marry.
Some may be wondering how we concluded that the term “unmarried” as used in this chapter actually refers to someone who was divorced. Well, that becomes clear when you read the various places the word “unmarried” was used in this chapter, the context in which it was used, and you look up the original Greek word translated “unmarried.” It becomes even clearer when the passage is read in multiple versions of the Bible.
The word “unmarried” is translated from the Greek word “agamos.” In the entire New Testament, the word “agamos” appears only in 1 Corinthians 7 where it was used 4 times. It’s a word that describes someone who is single as a result of a divorce.
We see this in 1 Corinthians 7:10-11) in reference to the married woman:
“But to the married I give instructions, not I, but the Lord, that the wife is not to leave her husband (but if she does leave, she must remain unmarried...)”
When a married person divorces their spouse and becomes single, such a person is described as being “agamos” i.e., unmarried as seen in verses 10-11. The state of singleness after a divorce is what’s called “agamos.” The person moves from being “gamos,” (i.e., married,) to “agamos,” i.e., unmarried.
This interpretation of the word “unmarried” is also confirmed by the fact that Paul used different words for someone who is single due to other reasons. For instance, he used the word “widow” to describe a woman who is not married as a result of the husband’s death, and the word “virgin” for the person who had never married. These are 3 categories of people who are singles but for different reasons.
Having settled the question of what the “unmarried” in the context of 1 Corinthians 7 means, we’ll spend the next commentary discussing Paul’s instructions to the Corinthians on whether or not the agamos (unmarried) can remarry.