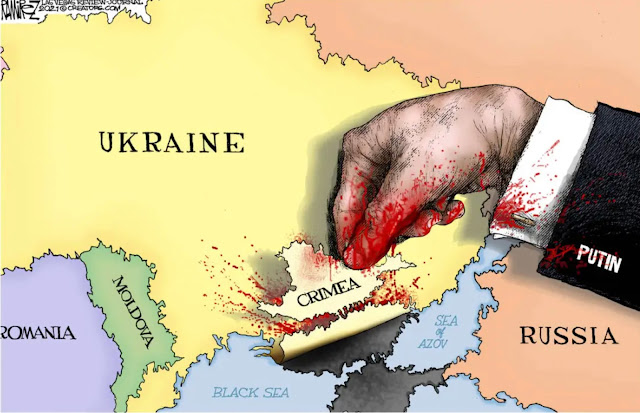 “The Fallacy of False Moral Equivalence”
By Akin Ojumu
As stated earlier in this commentary, there are people in western societies who see nothing wrong in the unprovoked invasion of a sovereign nation by Russia. To these people, Putin’s acts of aggression are the inevitable response of a harangued leader pushed to take actions in defense of his country. In their view, Putin is a victim of the belligerence of the out-of-control United States and its NATO allies who are hellbent on deploying their missiles to countries that border Russia.
It is true that the US and its NATO allies have their own faults and their hands have shed many innocent bloods in the name of national interests. Following the September 11, 2001 terrorist attack in the US, orchestrated by Osama Bin Laden and carried out by his murderous Al Qaeda followers, the US launched a war in Afghanistan and, together with what was called the “Coalition of the Willing,” invaded Iraq.
While the war in Afghanistan can be easily justified as a mission to root out the Al Qaeda from their camps deep in the mountains of that country, the invasion of Iraq cannot be so readily explained. The war in Iraq was based on a false premise and the destruction of that country was carried out on manipulated intelligence.
That said, Iraq was ruled by Saddam Hussein, a barbaric murderous lunatic who slaughtered his own citizens and had waged chemical warfare in the war against Iran, and also used chemicals in 1988 in the Al-Anfal Campaign against his civilian Kurdish population as well as during a popular uprising in southern Iraq in 1991. Saddam Hussein was a terror to his own people and a bad actor on the world stage. So, those who compare the US invasion of Iraq to what Putin’s aggression in Ukraine are being disingenuous and engaged in false moral equivalence.
Beyond the false moral equivalence in these arguments advanced by Russia’s apologists, the defense they marshal in support of Putin's unprovoked invasion of a peaceful democratic sovereign nation are twisted even on their merits. While it is true that the US and its NATO allies have often bristled whenever Russia stretches its sphere of influence close to their own borders, NATO has never invaded a peaceful sovereign democratic nation, reduced it to rubble, and slaughtered innocent civilians including babies, women, and the elderly, simply on the grounds of having a legitimate concern.
NATO’s primary purpose is to unify and strengthen the Western Allies’ military response to a possible invasion of western Europe by Russia. From its founding, NATO was not set up to initiate an attack against Russia but to defend its allies against attacks. It was not established to instigate acts of aggression but to prevent them when they arise.
With respect to NATO’s expansion to Eastern Europe. This is an argument that makes no sense. No nation has ever been compelled or coerced into joining NATO. The nations that have chosen to enter the alliance have done so of their own volition; it was the decision made by their own people.
That Baltic states like Estonia, Latvia, and Lithuania – which were all under the former Soviet Union – prefer to align with NATO instead of Russia, says more about Russia’s dwindling influence than it does the Western alliance imperial expansion. Nobody hitches their wagon on a losing horse. The Russian federation is a loser that has nothing to offer these nations.
These Baltic states would never have joined NATO if they thought an alliance with Russia would offer them better chances of realizing their dreams and achieving their aspirations for a prosperous future. The fact that they jilted Russia in favor of NATO is an indication of where they thought their safety and security lie. To blame NATO for the failure of Russia to offer a convincing promise of a better tomorrow to these Baltic countries, formerly under their sphere of influence, is silly and outright deceitful.
Geopolitics aside, the shattered lives of the Ukrainian people through no fault of their own should be enough to silence any defense of the ongoing atrocity being perpetrated by Vladimir Putin. With the backdrop of the human tragedies beamed to our mobile devices and television screens from the slaughter fields in cities, towns, and villages around Ukraine, the argument that Putin has “legitimate concern” sounds rather crass and totally insensitive. It’s tantamount to blaming a rape victim for getting raped because of the dress wore to the party.
No amount of national interest argument can wipe the stain of spilled Ukrainian blood from the hand and conscience of Putin. There’s no defense that can be mounted in support of the unprovoked and wanton destruction unleashed on a sovereign nation.
The people of Ukraine did nothing wrong to invoke the wrath of the madman of Kremlin. These are peace loving people who were going about their own business when Putin decided to send his military into their homeland to kill, maim and destroy. It is nothing short of evil to even hint at lending support to a murdering aggressor who butchers children, slaughters women, kills the elderly and displaces innocent civilians from their homes, turning them into homeless and helpless refugees at the mercy of other people.