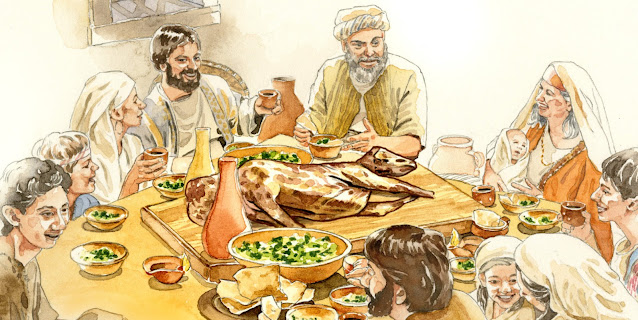 “The Tithe They Don't Ever Talk About”
By Akin Ojumu
Because the Ekklesia ignores Apostle Paul’s warning not to appoint novices as church leaders, there are many today with the title of “pastor” who should be nowhere near the position of being shepherds over the flock of God. Yet these wolves wield absolute power in the assembly of Believers and they exercise gangrenous influence over the eternal destiny of souls.
Characterizing these novices is their obtuseness in the Word of God. The consequence of their scriptural naïveté is manifested in the flawed exegesis and erroneous hermeneutics they spout.
In no other doctrinal matter is the inadequacy more pronounced than on the issue of tithe and offering, a practice that's so wrapped up in controversy that it has split the Church into two halves, the pro-tithe and the anti-tithe camps.
Last time, we started discussing one of the three – (actually 4) – different types of tithes. We described the Levites Tithes (the tithes apportioned to the Priests and Levites). In addition, we touched on the Tithe of Tithes which the Priests and the Levites were commanded to bring to the storehouse (i.e., the Temple Treasury).
This time, we'll continue with the discussion of the types of tithes by enunciating the Festival Tithe.
The Festival Tithe
Deuteronomy 14:22-23: “Be sure to set aside a tenth of all that your fields produce each year. Eat the tithe of your grain, new wine and olive oil, and the firstborn of your herds and flocks in the presence of the LORD your God at the place he will choose as a dwelling for his Name, so that you may learn to revere the LORD your God always.”
In the above passage, as well as in Deuteronomy 12:6-17, we find a second type of tithe, the Festival Tithe. The Israelites were to take the tithe to Jerusalem – the place He chose as a dwelling place for His Name – and it was to be eaten there by the family, friends, and servants in the sanctuary.
The Festival Tithe was very purposeful. The idea of it was to stimulate devotion to the Lord and to promote unity in the family. God commanded them to go to Jerusalem, and there they would consume the Festival Tithe. It was a sort of a national potluck – a national picnic – where everybody brought something to share.
This is the tithe that advocates of tithing don't ever talk about. It's the tithe they'd want us to forget. In fact, they'd rather it is erased from the Bible because it punches a huge hole in their faulty argument that God's mandate for tithing extends to New Testament Believers.  You'd never hear any pastor preach a sermon that encourages church members to throw annual tithe parties where they use their tithe money to buy food and drinks and make merry.
Whereas the tithe-teachers insist that tithe is 10 percent of a man’s income and must be brought to the storehouse (by which they mean the local church) in the form of money, Biblical tithe was never money. Only agricultural products were tithed. The Israelites could only bring a tithe of grain, fruit, and livestock. Money was never tithed, except for two provisions where tithe could be converted to money.
The first provision was in the Levites Tithes in Leviticus 27:31:
“If you want to buy back the LORD’s tenth of the grain or fruit, you must pay its value, plus 20 percent.”
The other provision was in the Festival Tithes in Deuteronomy 14:24-26:
“But if that place is too distant and you have been blessed by the Lord your God and cannot carry your tithe, because the place where the Lord will choose to put his Name is so far away, then exchange your tithe for silver, and take the silver with you and go to the place the Lord your God will choose. Use the silver to buy whatever you like: cattle, sheep, wine or other fermented drink, or anything you wish. Then you and your household shall eat there in the presence of the Lord your God and rejoice.”
Even of the agricultural products that could be tithed, only those produced within the boundaries of the land of Israel were permitted by God to be tithed. The tithe is holy to the Lord, it could only come from the holy land, which was the land of Israel. Anything brought from outside the holy land was considered unholy and, therefore, could not be tithed.
Furthermore, only those who have agricultural products could tithe. Those employed in other trades, such as fishermen, miners, lumber workers, construction workers, soldiers, weavers, potters, manufacturers, merchants, were exempt from tithing.
This is the Biblical tithing. Any teaching on tithe that does not conform with Scripture is an error, and it must be shunned.
Next time we’ll continue the commentary by discussing the Poor Tithe.