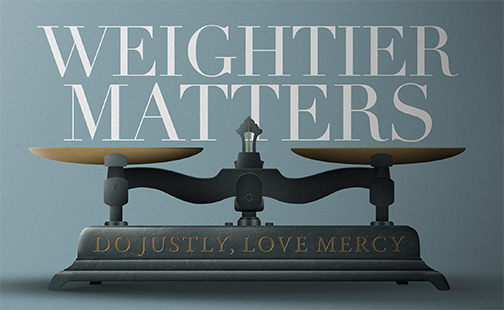 “Neglecting the Weightier Matters”
By Akin Ojumu
During the intertestamental period – i.e., the 400-year period between the conclusion of the writings of the Old Testament and the beginning of the New Testament – the Land of Israel experienced social, economic, and political upheavals.
For 400 years, there was Biblical and revelatory silence as God did not speak to His people until the angel appeared to Zechariah the father of John the Baptist as he was performing his priestly service in the Temple. That occurrence was God breaking a four-century silence and it marked the resurgence of supernatural activities like the world had never seen.
During this time, a foreign power – Rome and its Caesars – ruled Palestine with ironclad imperial authority. The Roman government imposed all kinds of levies and taxes on the people. Tax collection became a booming business and Rome appointed Tax collectors, like Zacchaeus, became wealthy by heaping on the people inflated tax obligations. For this reason the people hated the tax collectors. The imperiousness and the subjugation eventually led to the rebellion of the Maccabees who engaged in guerrilla warfare against the Roman rulers.
At the same time, a radical transformation in the religious lives of the people was taking place. The religious leaders had become morally bankrupt and spiritually corrupt. In a departure from the Law of Moses, they invented all sorts of rites and rituals and imposed them upon the people.
One example of this corruption of the Law of Moses was in the practice of tithing. The religious leaders broadened the requirements making it mandatory for the people to pay a tenth of every little thing including seeds, herbs, and plants.
It was to this corruption of the tithing practice that Jesus alluded in Matthew 23:23:
“Woe to you, teachers of the law and Pharisees, you hypocrites! You give a tenth of your spices – mint, dill and cumin. But you have neglected the more important matters of the law –justice, mercy and faithfulness. You should have practiced the latter, without neglecting the former.”
They were forced to pay tithes of mint (little herbs), anise (plants) and cumin (seeds). If they had ten seeds, they would give one seed to the priests. If they had ten herbs, they separated leaves and gave one. The leaders became a legalistic bunch who emphasized the minutiae but ignored the important things – the weightier matters, such as justice, mercy, faith.
In the last commentary, we discussed the pattern of giving from the time of Jesus to the present day. The importance of demarcating this period into the pre-crucifixion and post-crucifixion periods was to contextually understand giving during this period of time.
The pre-crucifixion period falls within the period of the Mosaic Law. The practice of giving during this period generally follows whatever guideline in existence under the Law of Moses. Additionally, the religious leaders of that time had also imposed on the people extra burden and added requirements that the Law of Moses never even stipulated.
Required Giving in The Pre-Crucifixion Period
In addition to the tithes, another required giving in this period was the Two-Drachma Tax or the Temple Tax. It was one of the additional burdens the religious leaders had placed on the people as they expanded the Law of Moses beyond what was originally stipulated.
What exactly is the Two-Drachma Tax (aka Temple Tax)?
Matthew 17:24-27: “On their arrival in Capernaum, the collectors of the Temple tax came to Peter and asked him, “Doesn’t your teacher pay the Temple tax?” “Yes, he does,” Peter replied. Then he went into the house. But before he had a chance to speak, Jesus asked him, “What do you think, Peter? Do kings tax their own people or the people they have conquered?” “They tax the people they have conquered,” Peter replied. “Well, then,” Jesus said, “the citizens are free! However, we don’t want to offend them, so go down to the lake and throw in a line. Open the mouth of the first fish you catch, and you will find a large silver coin. Take it and pay the tax for both of us.””
The Two-Drachma Tax was a Jewish tax related to the temple, which had become grossly exorbitant to maintain. To continue to operate the Temple, the religious leaders invented an elaborate system of extortions to generate funds that included the Two-Drachma Tax. In addition, they made it a habit of disqualifying the animals the people brought for sacrifice and instead sold them animals from their own stock at inflated prices.
To pay the Temple Tax, the people had to purchase a special coin sold by the priests. This coin was not in general circulation. It was minted by the religious leaders and could only be obtained from them.
The coin cost half a shekel, i.e., two Greek drachma, called the double drachma or didrachma. It was the equivalence of roughly two days’ wages. So, it was customary for two men to combine to pay for one coin.
In furtherance of the operation of their extortion scheme, the religious leaders also installed on the Temple ground rows of stalls where they made the people come and purchase items needed for the sacrificial offerings. Jesus condemned this whole arrangement, calling it a “den of robbers,” and he went on to overturn their tables and drive the extortionists away from the Temple (Matthew 21:12).
From the gains of their extortion scheme, the High Priest and the religious leaders became extraordinarily wealthy. Like leeches sucking the life blood out of the people, they grew fat on the labor of the poor people. They lived lavish lifestyles; massive mansions in the suburbs, richly embroidered attires, gold rings on all five fingers of both hands, (hence the name, five-fingered man), etc.
The very same thing continues even up to this day. Modern-day religious leaders have taken the extortion scheme of old, perfected it, and have taken it to a whole new level.