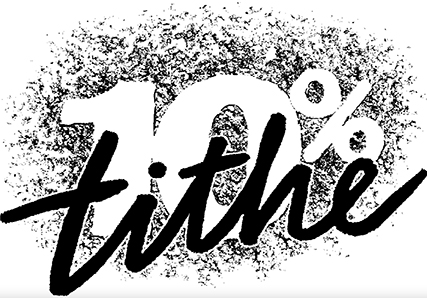 “Tithe Is Mathematical Not Mythical”
By Akin Ojumu
A pervasive intolerance exists among clergies to questions about tithes. There's a tendency to immediately shut down anyone who voices an opinion about tithing that's a departure from the norm. Any dissent from traditional tithing beliefs is always met with scorn. To ask about tithes is to invoke the wrath of the man of God.
Even church members who innocently seek to understand the Biblical basis for the tithing, as all Christians should, are deemed rebellious. The response they often get is along these lines:
“Be careful who you listen to. Tithe is a clear command of God in Malachi 3. Whether you want to obey God is up to you. You are free to do whatever you like.”
Such dismissive attitudes, even to innocuous questions about tithing, reflect poorly on all clergies. It betrays a profound shallowness in the understanding of Scripture on the part of the man of God.
The stifling of legitimate inquiries about tithing, and all religious practices, is untenable for anyone who calls himself a Pastor. A man of God who's confident about his knowledge of Scripture will be willing to engage a congregation seeking answers on Scriptural matters.
After being chased out of Thessalonica and Berea by the Jews, Paul arrived in Athens. Seeing the idols all over the city, he was grieved in his spirit. Yet we read this wonderful passage in Acts 17:17.
“Therefore, disputed he in the synagogue with the Jews, and with the devout persons, and in the market daily with them that met with him.”
The Greek word translated “disputed” in the above passage is the word dialegomai. That's the word from which we derive the English phrase, “to dialogue.” Paul was willing to engage in dialogue even with his Jewish and idolatrous gentile opponents alike. He never shut down debate, instead, he reasoned with everyone willing to listen.
In fact, Paul stayed back in Athens for weeks debating the Epicurean and Stoic philosophers in the Areopagus (or Mars Hill) showing them, from Scripture, the foolishness of their philosophies and presenting them true wisdom that comes from the Almighty God. (Acts 17:22-34).
The duty of the shepherd is to feed the flock. A Pastor who's genuinely concerned about the souls of men under his care will be prepared to answer anyone who asks for a Biblical reason for their beliefs, and he'll do so with gentleness and utmost respect.
Only wolves in shepherd's clothing muzzle legitimate doctrinal discourse. True shepherds will diligently respond to all inquiries about the faith even if they find it uncomfortable to do so.
This commentary sets out to do just that. The purpose is to answer a controversial question using Scripture. It's an attempt to explain from the Bible what God actually says about giving. Our prayer is that, after reading this commentary, people will go back to their Bibles and study with their minds attuned to the Holy Spirit and the blinding veil of doctrines of men stripped from the eyes of their hearts.
Giving Under the Mosaic Law Through the Time of Jesus (Old Testament)
Having addressed giving in the pre-Mosaic Law era, we now turn our attention to giving practices under the Law of Moses.
Just as it was before the advent of the Mosaic Law, giving under the Law of Moses also falls into two categories.
1. Freewill giving
2. Required (Mandatory) giving
Required Giving Under the Mosaic Law
Required (i.e., mandatory) giving under the Mosaic Law included tithes. Ma'aser is the Hebrew word for Tithe and it simply means a tenth part. It's the same as dekatoo in Greek.
Contrary to what many have been taught, the word "tithe" is not a religious term, it's a mathematical word. It has only to do with a percentage, it means a tenth. There's nothing mythical, mystical, or magical about it.
Historically, even outside the Bible from available ancient sources, we know that man has always used 10 as the basic number for counting systems. The symbol of measurement is 10. Ten then becomes the number of completion. We see this sometimes even in Scripture. There is evidence that many pagan deities were honored by the giving of a tenth. And the reason is, since the 10 represents totality or completeness, the giving of a tenth was a symbol of the giving of the whole.
In the giving of a tenth of something, the totality was represented in that tenth. By giving what was a total number of 10, you are simply symbolizing the fact that you were giving your all, since 10 was the symbol of totality. So, the total number, 10, became then a common number in terms of offerings to deities among the pagans.
Under the Mosaic Law, there were 3 different types of tithes that the children of Israel were required to give:
1. The tithes to the Levites – the Levites Tithe (Leviticus 27:30)
2. The tithes to be consumed by the people – the Festival Tithe (Deuteronomy 12:4-17)
3. The tithes given to the poor, widows, strangers – the Poor Tithe (Deuteronomy 14:28)
Which of these 3 different tithes is commonly practiced today? Whatever happened to the Festival Tithe that the tither was commanded by God to consume, along with his family and friends. There’s a lot still to unpack here. We are definitely going to delve deeper into it next time.