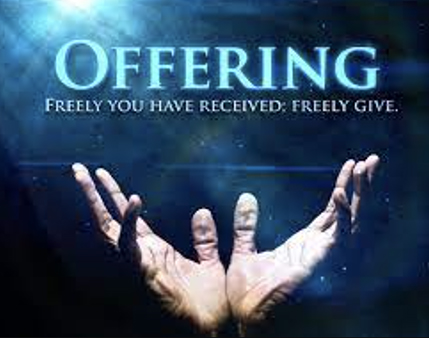 “Freely Received, Freely Give”
By Akin Ojumu
The history of giving in the Bible can be divided into three periods or dispensations:
1. Giving Pre-Mosaic Law (Old Testament)
2. Giving from Mosaic Law to Jesus (Old Testament)
3. Giving from Jesus to Present Day (New Testament)
These are three periods of history. Three dispensations. In all these 3, the same pattern of giving is taught. There is no difference.
Giving In Pre-Mosaic Law (Old Testament)
Giving before Moses falls into two categories as does all giving in the other 2 periods.
1. Freewill giving
2. Required giving
Freewill Giving In Pre-Mosaic Law
In Genesis Chapter 4:3: “In the process of time, it came to pass that Cain brought the fruit of the ground and Abel brought the firstlings of the flock.”
Here you have the first offering. Now the first offering given to God was from Cain and Abel. It was a voluntary offering. There is no command that they were to do this. God did not tell them specifically to do this, at least it is not so recorded in the Scripture.
It seems to mean that just in process of time it came to pass that they did it. It was a free choice on their part. They were prompted by their own initiative. There was no requirement. There was no amount. There was no stipulation and there was no frequency enjoined upon them. It was completely at their own will.
Genesis 8: 20 – Noah built an altar and took of every clean beast and every clean fowl and offered burnt offerings on the altar.
The flood subsides, Noah immediately goes out to make a sacrifice or to make an offering to God. Again, it is completely voluntary. There is no command. There is no stipulated amount. There is no percentage given. Noah determined in his own heart to make the offering to the Lord. It was spontaneous.
Genesis 12:7, 13, 18 – Abraham built an altar to the Lord and make an offering to the Lord.
Again, there is no command. There is no stipulation. There is no requirement. Only the free spirit of Abraham in response to the wonderful promise of God as he says thanks to God by way of an offering.
Genesis 14:20 is the first mention of tithe in Scripture.
Abraham had just returned from fighting the 4 kings; Amraphel of Babylonia, Arioch of Ellasar, Chedorlaomer of Elam, and Tidal of Goiim in the Valley of Shaveh. And he had been victorious, and he had taken a tremendous amount of spoil, treasure from these kings that he had conquered. On his way back, he runs into the king of Salem, Melchizedek who was not only a king, but also a priest of the Most High God. So, when Abram sees this man who represents God, he wants to express thanks to God for the victory. So, he gave him a tenth of all.
Now it doesn't say God told him to do this. It wasn’t recorded that God commanded that he give a tenth. This is the only time that he ever gave a tenth that we know of in the record of his 160 years on earth. At no time in the Scripture is it ever recorded before or after this incident that he ever gave a tenth. And it wasn't a tenth of his income and it wasn't an annual tenth. It was simply that he chose to do it.
Genesis 28:20-22. This passage of Scripture tells the story of Jacob and his vow to make YAHWEH his God and his promise to give a tenth of his possessions to God if He will bless him on his journey to his Uncle's home.
In other words, God if you do this I will bow down to you. He was trying to buy God. There's no command that he give it. It was completely arbitrary, completely voluntary with no obligation at all to tithe.
From Cain and Abel right through to the gift of Jacob and in all cases, they were free voluntary gifts.
Out of all of the offerings throughout the book of Genesis, twice it happened to be that they gave a tenth. Which in their eyes and in the eyes of ancient people simply represented the total and the sense that it was a symbol of giving all, nothing more.