CONCERNING SPIRITUAL GIFTS, DO NOT BE UNINFORMED (PART II) 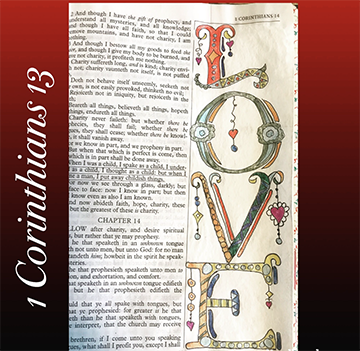 “Without Charity We Are Nothing”
By Akin Ojumu
Just as it was with the Corinthians, so it is in the Church today. When it comes to spiritual gifts, there are many in the Body of Christ who are unaware, uninformed, and ignorant. As a result of their ignorance, they abuse and misuse the gifts of the Holy Spirit.
Many of the so-called spiritual gifts on display today are counterfeit gifts. The tongues, prophesies, and all are mere imitations that bear no resemblance to the actual gifts of the Holy Spirit. And like the Corinthian folks, there are many who use these fake spiritual gifts to vainly pump themselves up.
The confusion and obfuscation caused by the widespread ignorance about spiritual gifts was what led to the question this commentary set out to address. A concerned Bible-Believing Believer wanted to know whether prophecy is utterance by divine inspiration or simply about predicting the future as it is widely practiced today. To accurately answer the question, one must go back to Scripture the source of all prophecies.
“But he that prohesieth speaketh unto men.” (1 Corinthians 14:3).
The Greek word translated prophecy is the word prophēteia. It’s from the root word prophemi, which means to “speak before.” Pro (Before) and Phemi (speak). Literally, to prophesy means to speak before someone i.e., the ability to speak before an audience.
Historically, prophecy wasn't always a prediction. The use and the meaning of the word changed during the Middle Ages when in the English language it came to solely connote foretelling or predicting the future.
Biblically, prophecy is basically about proclaiming God's truth. What is proclaimed could either be revelative (i.e., reveal what is not already known or foretelling) or reiterative (reiterate what is already known or forthtelling). The gift of the prophecy is the ability given by the Holy Spirit to an individual that enables him to proclaim God's truth to others. It is the proclamation of God's truth publicly.
Both revelative (foretelling) and reiterative (forthtelling) aspects of prophecy were needed to establish the foundation of the Christian faith (Ephesians 2;20). This foundation was laid by the apostles and prophets who proclaimed God's truth to the people as revealed to them by the Spirit of God. These gifted men prophesied by revelation and iteration; they foretold and forthtold.
The prophetic ministries of the early prophets and the apostles of the Christian faith can, thus, be likened to telescopy and microscopy. Telescopic prophecy (i.e., foretelling) is when they revealed what wasn’t yet known. On the other hand, microscopic prophecy (i.e., forthtelling) is when they reiterate what had already been revealed by teaching from the Scripture (which contains what was revealed to them).
As soon as the foundation of the faith was laid and Scripture was fully written, the revelative (foretelling) aspect of prophecy ceased. Thus, the operation of the gift of prophecy in the modern-day era became solely reiterative i.e., forthtelling by proclaiming what had already been revealed as written in the Bible. To prophesy, therefore, is to preach and teach the revealed truth of God.
“Love never fails, it never fades nor ends. But as for prophecies, they will pass away; as for tongues, they will cease; as for the gift of special knowledge, it will pass away.” (1 Corinthians 13:8).
All these spiritual gifts that people clamor for are only temporary things. Love is the only thing that endures. The gift of tongues has already ceased, reiterative prophecies will one day pass away, but love will forever remain.
“Now we see things imperfectly, like puzzling reflections in a mirror, but then we will see everything with perfect clarity. All that I know now is partial and incomplete, but then I will know everything completely, just as God now knows me completely.” (1 Corinthians 13:12).
The “then” in the above passage refers to eternity with God. When we are with God, prophecy will no longer be needed because we will know everything. Then, hope won’t be necessary, and we certainly won’t need faith anymore, because then we are with God. In eternity we don’t need to be taught knowledge because we will know all things fully just as we are fully known.
“And yet some of you keep competing for so-called “important” parts. But now I want to lay out a far better way for you.” 1 Corinthians 12:31.
While the Corinthians were preoccupied with getting the showy gifts of tongues and prophecies so that they can boast about how spiritual they are, they forgot the most important gift of all. LOVE. Apostle Paul then went on, in 1 Corinthians 13, to teach them that love is the basis and foundation of all spiritual gifts.
Without love we are nothing. All our spiritual gifts amount to nothing if we are empty of love.