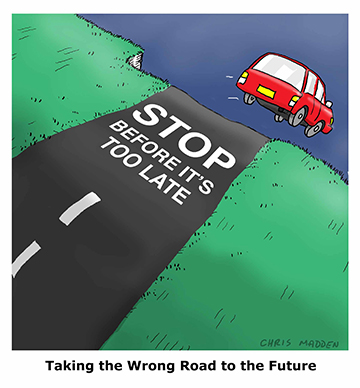 “A Bolekaja Can't Take You to a Future and a Hope”
By Akin Ojumu
Many of us warned Nigerians of the peril of hiring a tired old man, who is decades past his prime, for the job of overseeing a large and complex country like Nigeria; a task that demands a razor-sharp mental acuity, ample vigor, and boundless vitality. Instead of heeding those warnings, overwhelming majority jumped on the bandwagon of change and hinged their hope on a decrepit jalopy to take them up the steep hill to the next level.
Predictably, the mammy-wagon, aka Bolekaja, broke down less than a quarter of the way up the hill, and Nigerians are now facing the harsh realities of their blunder. The country is in total chaos, things are falling apart, and the center is struggling to hold. Every waking moment in Nigeria is like a repeating nightmarish Groundhog Day of agony, misery, and horror.
You would think by now, six years later, Nigerians have suffered enough and have learned their lessons. Wrong. They are at it again, toying with the idea of leaving their fate in the hands of a spent kleptomaniac septuagenarian who spends more time on the hospital bed than in his own bedroom.
At such a critical juncture in history, it’s important to sound the alarm and warn Nigerians that they are setting themselves up for torment once again. The pang of convulsion they are currently experiencing is going to be child’s play compared to what's in store for them if they ever make the destiny shattering mistake of handing the keys to their future to the prince of thieves and his pack of wild dogs.
The warning of Samuel to the children of Israel, in 1 Samuel 8:11-18, when they rebelliously rejected God and asked for a king to reign over them like the other nations around them is a poignantly fitting caution to Nigerians of what the patron of political patronage would do to their country if he ever ascends to the highest office in the land.
“This is what the king who will reign over you will claim as his rights: He will take your sons and make them serve with his chariots and horses, and they will run in front of his chariots. Some he will assign to be commanders of thousands and commanders of fifties, and others to plow his ground and reap his harvest, and still others to make weapons of war and equipment for his chariots. He will take your daughters to be perfumers and cooks and bakers. He will take the best of your fields and vineyards and olive groves and give them to his attendants. He will take a tenth of your grain and of your vintage and give it to his officials and attendants. Your male and female servants and the best of your cattle and donkeys he will take for his own use. He will take a tenth of your flocks, and you yourselves will become his slaves. When that day comes, you will cry out for relief from the king you have chosen, but the Lord will not answer you in that day.”
Stop, think, and compare what your life is now with what it was before the senescent citizen came to power. Are you better off now than you were six years ago when you first drank the Kool-Aid of change? Do you feel more secure in your home or safer on the highways? Is the education system better? Have you seen any improvement in the health care system? Do you enjoy uninterrupted power supply? Have the prices of goods and services reduced? Has your financial situation gotten any better? Is your take home pay taking you home? How is your business doing lately? Can you honestly say you are confident about your future or that of your children?
Election sloganeering is cheap, don’t be fooled by them. Tune out the rhetorical flourishes, they are meant to bamboozle you. Tribal sentiments won’t put food on your table, cut it out. Enough already of the blind partisan allegiance, what good has it done for you lately.
Toute nation a le gouvernement qu'elle mérite. Every nation gets the government it deserves. Praemonitus, praemunitus. To be forewarned is to be forearmed. Think, Nigeria. Choose wisely. If you take the wrong road to the future, you'd end up in a tomorrow with great regret. A mammy-wagon is certainly not what you need to get to a future that is bright and full of hope. Do not say you weren’t warned.