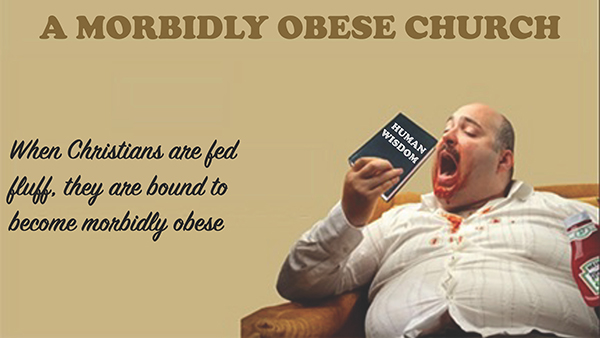 “A Church Too Obese To See Its Own Waistline”
By Akin Ojumu
Christianity is at the weakest and lowest it has ever been. At no other point in its two-century long history has the church been this spiritually bankrupt, and never has the Body of Christ been this corrupt. The very same people called to be the light of the world have become black holes into which light enters and dies and turns into darkness. Those who are meant to be salt that preserves the earth have gotten maggoty, festering everything they touch.
How did you fall from glory, O Church, saints of the Almighty God? How have you become this empty, you who are supposed to strengthen the nations!
The current state of the church is the real-life enactment of that popular saying, “Those who fail to learn from history are doomed to repeat it.” The hideousness that now characterizes the church is what always happens to people who ignore their calling, forget their purpose, and desert their mission. It's eerily similar to what happened to the angels who did not stay within their own position of authority, but left their proper dwelling, and ended up in eternal chains under gloomy darkness until the judgment of the great day.
Called out to be separate from the world, the church sank into the murky mire of worldliness and became undistinguishable from it. As soon as the people of God developed a taste for the pleasures of the world they quickly got accustomed to it. The church became weak due to its relentless pursuit of endless comfort, and its rapacious appetite for uninhibited pleasure resulted in a church that's so morbidly obese it can no longer see its own waistline.
Lured into believing it is rich and prospering, with no need of anything, the church doesn't realize it is wretched, pitiable, poor, blind, and naked. To the average Christian drunk on the Kool-Aid of Satanic deception, life couldn’t be rosier and everything is hunky dory.
Blinded to their own nakedness and unaware of their morbid obesity, they go about proclaiming that the apostolic age is upon us once again. Fake apostles and false prophets are everywhere, engineered miracles are happening every day, and false claims of “Thus saith the Lord,” ring out loud from the church steeples.
Inebriated with the toxic brew of lies, conjectures, and grandiose delusions, the Church confuses its steep relapse with a spiritual renaissance. They invented false standards to measure their own success. Massive shining church buildings, palatial parsonages situated on acres of land, a garage full of luxury cars that the pastor owns and the long wingspan of his private jet, Sunday services packed to the brim with easily excitable crowd, and tithe and offering baskets that are full to the brim, have all come to be regarded as indicators of a growing church.
Worse still, filling the church pews are folks who actually believe they are saved, but they are not. These people have been shepherded through the wide gates and are being ushered on a broad road that leads to destruction. They are lifeless zombies of the zombie apocalypse.
They’ve been programmed to believe that going to church, paying their tithes, acquiring a title, singing in the choir, speaking in tongues, praying for hours, giving a prophecy, performing miracles, being addressed as "daddy or mummy," are all that’s required to get one to heaven. I hate to say it, but a rude awakening awaits all those who have bought into such a lie.
Christianity is much more than checking a box of religious rites. Making heaven demands a whole lot more than a mechanical performance of some perfunctory sacraments. A Christian faith that brings about no change in someone's life is no faith at all.
A true faith – a saving faith – always results in the transformation of the life of the person who has it. It’s a faith that starts at the altar call and progresses to a continuously sanctified life. The faith that gets someone to heaven is one that produces a holy living, for without holiness, no one will see the Lord.