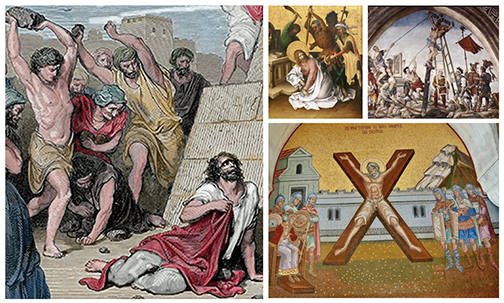 “Persecution Doesn’t Kill The Church, It Only Makes It Stronger”
By Akin Ojumu
In its early days, the church enjoyed a moment of bliss. As they fellowshipped and broke bread together, singing praises to God, the nascent movement flourished as more and more people were added to their number. In addition, they enjoyed the goodwill of the people,
Having thus settled into a comfort zone and gotten accustomed to a familiar territory in Jerusalem, complacency began to set it in. The early Christians forgot that the place of their assignment was beyond their zone of comfort.
The Lord's command that they will be His witnesses in Jerusalem, and in all Judea and Samaria, and even beyond their shores to the uttermost part of the earth seemed like an imperceptible whisper and a faded memory. They, instead, pitched their tents in Jerusalem among their fellow Jews, believing the work of redemption was for the benefit of Israel only.
That was the case until the Lord rustled up their cushy nests and pulled the soft feathers from underneath their comfortable beds of serendipity. The floodgate of persecution was thrown open and the Lord caused them to be buffeted with great torment. Like a deluge, the persecution came fast and furious, and the backlash made landfall with the force of a category 5 hurricane. The believers were hounded out of city gates, and they were harassed in the marketplaces. Thus the honeymoon came to an abrupt end.
Sensing the jawbreaking uppercut that was about to land on its chin, the kingdom of darkness unleashed the kraken of hate against the bearers of Good News. In an attempt to abort the burgeoning faith in-utero, Satan stirred up a whirlwind of venom against the Saints of God. They were imprisoned, beaten, stoned, stabbed, hanged, submerged in a hot cauldron, eaten by lions, and subjected to all manners of cruelty that evil minds could devise. Many of the early Christians died gruesome deaths.
In order for you to understand that Christianity has never been a bed of roses scented with lavender, the following are just a few of the early Christians martyrs and how they were martyred (Source: Early Church History):
(1) Stephen, the first Christian martyr, the protomartyr, was stoned to death in Jerusalem (Acts 7:54-60).
(2) James, son of Zebedee, was killed by a sword under Herod Agrippa (Acts 12:1,2).
(3) Philip was scourged, thrown into prison, and crucified in c. 54 in Hieropolis (Turkey).
(4) Matthew, author of the Gospel of Matthew, was killed by a sword while he was preaching in Ethiopia in c. 60.
(5) James the Just, Jesus’ brother, was thrown from a parapet in Jerusalem and then clubbed to death in c. 62.
(6) In c. 62 Andrew, Peter’s brother, was crucified in Edessa (Turkey) on a cross with two ends affixed to the ground (called the St. Andrew’s Cross).
(7) During the persecution of Christians in Rome under Nero in c. 64-67,
Peter was crucified upside down
(8) Paul was beheaded in Rome during the rule of Nero in c. 64-67
(9) Mark, author of the Gospel of Mark, was dragged to pieces in Alexandria (c. 68).
(10) Matthias, chosen to replace Judas as the twelfth Apostle, was stoned and then beheaded in Jerusalem.
(11) Jude aka Thaddeus was crucified in Edessa in c. 72
(12) Simon the Zealot was also crucified in Britain in c. 72
(13) Thomas, who doubted Jesus’ resurrection, was martyred in India c. 72
(14) Nathaniel (aka Bartholomew) was skinned alive in India (or Armenia).
Satan's intent was to break the will of the early converts and stop the spread of Christianity at the gate before it took off. On both counts, he failed woefully.
Despite the persecution and their sufferings, the people of God weren’t perturbed, and the move of God could not be stopped. Instead of fading into obscurity, they grew from strength to strength. Rather than becoming a footnote in history, Christianity became the history in and of itself.
Persecution was the refiner's fire that purified the church for God's purpose. The more they suffered, the more they hungered and thirst after God's righteousness. It was at moments when they appeared to be at their weakest that they showed the world they were at their strongest.
The flames of persecution, which Satan intended to use to diminish their numbers, became the wind of evangelism that propelled the fire of the faith even further to the outer reaches of the world, just as the Lord had commanded. At the peak of their sufferings, the infant church grew in even greater numbers.
Persecution did not break the church, it was the instrument of God to take the church to where He wanted it to go. The Lord used the flood of persecution to carry them from Jerusalem, and all Judea and Samaria to the places of their assignment in the furthermost parts of the earth. The anguish and the agony that these early Christians suffered brought the Gospel to you and me. These faithful men and women laid down their lives to give everyone a chance at eternal life.
Sadly, in total disregard for the heavy toll on the early fathers to bring the Good News to them, the modern-day church who is the inheritance of the saving faith conduct itself in a manner unbecoming of the calling wherewith it has been called. Christianity today is completely foreign to the faith that was handed down by the forebears.
And that’s a rather scathing indictment of the present-day church.