THE KEEPER OF PROMISES (PART III) 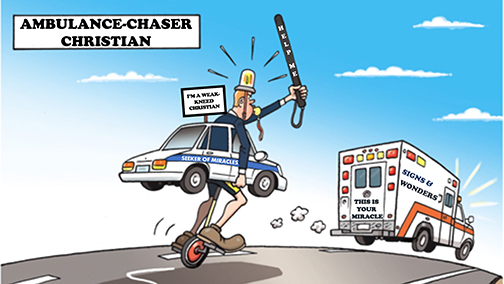 “The Ambulance-Chasing Christianity”
By Akin Ojumu
“Now faith is the assurance (title deed, confirmation) of things hoped for (divinely guaranteed), and the evidence of things not seen [the conviction of their reality – faith comprehends as fact what cannot be experienced by the physical senses].” (Hebrews 11:1).
Faith, trust, and contentment are the hallmarks of the true Believer. If you trust God to be enough for you, you won’t pursue man to tell you what the future holds. No true seeker of God consults the arm of flesh to divine what lies ahead. Only slaves and strangers need an intermediary to approach their Master. Those who are children of God, who genuinely belong to Him, would go to their Father directly to ask for whatever they need. And their Father in Heaven always answers.
The proof of true belief is to fervently hold on to God’s promises even when it looks foolish to do so, and especially when everything says otherwise. For such a belief is firmly rooted in the knowledge that for as many as are the promises of God, in Christ they are all answered, “Yes.” It is a faith that is anchored in the unshakeable assurance of God's faithfulness.
“For the word of God is alive and active. Sharper than any double-edged sword, it penetrates even to dividing soul and spirit, joints and marrow; it judges the thoughts and attitudes of the heart.” (Hebrews 4:12).
God does not need to prove Himself with signs and wonders to persuade a sinful world to believe in Him. Scripture is the only proof we need to win souls for God’s kingdom, and true knowledge of the Word of God is the power that keeps the souls won in His Kingdom. It’s those who abide in His Word that are the true disciples of Jesus Christ. Only the true disciples of Jesus know the truth of God, and it’s only those who know the truth of God that are set free by the truth they know.
If you will commit to search His Word, you are sure to find that which you seek. It’s only when his Word dwells in you richly that you’ll realize that the fulfillment of all your heart desires can be found in that which has already been written down and handed to you.
Until such a time when you determine in your heart to devote yourself to the perfect law of liberty, you’ll forever remain a victim of your circumstances. As long as you take your eyes off the Book of Life, you’ll continue to stumble around in the darkness of time, and you’ll never cease to flounder about in the void of empty space of life.
Let this be abundantly clear to you. No true Believer in God goes about chasing after the conjurer of miracles. You cannot be a Christian and be running after signs and wonders. True worshipers of God commune with Him in their personal places of prayers, they seek to know Him in the pages of Scripture, and such surrender to Him by observing to do all that is written in the Bible.
There were many among the crowd that followed Jesus who were not there because they were fully committed to Him. They came for the food – they ate the loaves, had their fill, and came back for more (John 6:26). The same is true today in the various denominations.
The campgrounds, crusade meetings, and Holy Ghost Nights are bursting at the seams not because the crowd really love God or because they want to know Him. The reason they come with their jerrycans of water and drums of olive oil is so that the Magi (the Greek word for magicians) performing on the pulpit can pray and magically turn the water and the olive oil into potent elixir which they can drink to cure their ailments, bathe with to attract favor, pour into their food for long life, and anoint their bodies and belongings to ward off evil spirits. It's not God they are after, like the multitudes who followed Jesus for the food, what brings them is what they want to get from God.
Such people are "ambulance-chasing" Believers who hop from one crusade to another, in pursuit of the next man of God who claims to have some power to perform wonders, and they truly deserve our pity. All those who kiss the feet of some apostle who professes to have Jesus Christ visit him in his bedroom on a regular basis, need our prayers.
Weak-kneed Christians who make it a habit of going to the top of the mountain to seek the help of demon-possessed prophets clothed in rags, spotting untidy dreadlocks that reach down to the waist, and whose breath smells like a rotten corpse, are seriously in need of divine intervention.
People who hang their faith in Christ on the hook of paranormal phenomena and whose faith stands on the exhibition of the mystical are of all men most miserable.
“For His divine power has bestowed on us absolutely everything necessary for a dynamic spiritual life and godliness, through true and personal knowledge of Him who called us by His own glory and excellence.” (2 Peter 1:3).