THE KEEPER OF PROMISES (PART I) 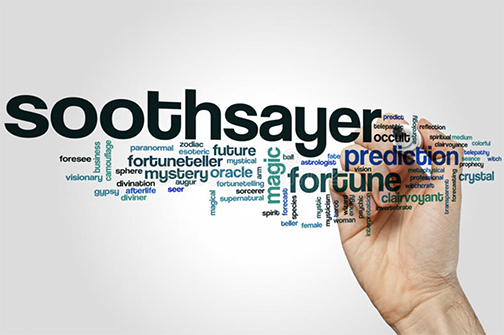 “Rebellion Is the Root of Soothsaying”
By Akin Ojumu
‘Tis the season of the phonies. From here on till the end of the year, we enter the silly season of spurious prophecies about the coming year. Impostors of all shapes and sizes will be crawling out of the woodwork to inveigh about falling rain, flooded streets, road accidents, plane crashes, riches made, election wins, election losses, and someone dying in 2022. Duh!
Even with their notorious track record of being widely off the mark, these fortune tellers continue to capture the imagination of simple-minded folks who, having traded their sense of reason, succumb to fascinating fantasies and fantastic fairy tales. Rather than being encumbered with sound mental judgment, these consumers of hocus-pocus conjuring choose instead to surrender themselves to wishy-washy wishful thinking.
You can chalk it all up to the human penchant to want to know tomorrow. The fault is encoded in our genes. Constrained by the limitations of the space-time continuum, the human race cannot see beyond the hic et nunc. The walls of our temporal box constitute a barrier that blocks our view into what’s beyond.
As you would expect, this fate is not one that us humankind is willing to take lying down. So, at every turn we resist, and in every way we rebel. In defiance of the natural limitations to know tomorrow, we deploy all sorts of gimmickry and employ all manners of antics to overcome the earthly confinement.
First, we tried eating our way out of the box when Eve ate the forbidden fruit at the cunning insistence of none other than Lucifer himself, the Persona Non Grata-in Chief in Shekinah Glory. Then, we attempted climbing our way out of it when we erected a Tower in Babel whose top reached unto heaven.
When all that blew up in our faces and forever shattered our destiny, we hired the services of a myriad of psychics, mystics, seers, diviners, clairvoyants, you name it, to tell us what tomorrow holds. Surprise, surprise, many of them turn out to be charlatans, impostors, and dupes looking to make a quick buck out of us dumdums.
Curiosity about mysteries and the desire for knowledge about mythical things are like the pull of a powerful magnet that we can’t seem to be able to resist. There’s something about the unknown that catches man’s fancy, and our inordinate fascination with the esoteric often drives us to do unthinkable things. Because of our innate deficiencies in discerning enigmas, we easily fall at the feet of anyone who seems to us to possess the supernatural ability to divine the secret things of this world to which the natural mind is blind.
What is it really about the future that fascinates us so much? Why do we keep climbing to the top of the Towers of Babel to peep through the window of time into tomorrow? The answer, in my mind, goes back to before time, and the Prophet Isaiah tells us why.
“How you are fallen from heaven, O Day Star, son of Dawn! How you are cut down to the ground, you who laid the nations low! You said in your heart, ‘I will ascend to heaven; above the stars of God. I will set my throne on high; I will sit on the mount of assembly in the far reaches of the north; I will ascend above the heights of the clouds; I will make myself like the Most High.’” (Isaiah 14:12-14).
Man is afflicted with the very same disease that came upon Lucifer, that caused him to want to be God, and even more than God. In reaching for the forbidden fruit and taking a bite of it, Satan infected man with a sickness of the soul, which is rebellion against the Almighty God. What drives man to want to know that which God has not given the ability to know is the mutiny buried in his soul against the wishes of his Maker.
Every time man runs to a diviner to tell him what tomorrow holds, he is basically giving the One who holds tomorrow in His hands the middle finger. Whenever man seeks out a conjurer of mystery to tell him whether his life will be enough, he tells the El-Shaddai – God, who is more than enough and more than sufficient – that He is not enough and not sufficient.
“There shall not be found among you anyone who…uses divination, a soothsayer, one who interprets omens, or a sorcerer, or one who casts a spell, or a medium, or a spiritist, or one who consults the dead. For whoever does these things is detestable to the Lord; and because of these detestable things the Lord your God is going to drive them out before you. You are to be blameless before the Lord your God.” (Deuteronomy 18:10-13).