A TWO-MILE CHURCH IN A ONE-MILE WORLD (PART II) 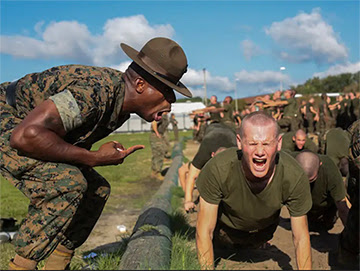 “The Christian Life Is A Boot Camp”
By Akin Ojumu
“Suffer hardship with me, as a good soldier of Christ Jesus. No soldier in active service entangles himself in the affairs of everyday life, so that he may please the one who enlisted him. (2 Timothy 2:3-4).
As an enlisted man or woman in the Lord's army, the Christian is immediately thrust into the frontlines where the battle between the forces of the kingdom of light and the kingdom of darkness is fiercest. Without much of any training, the Believer in Christ finds himself in the middle of the fight for the souls of men. What he thought was going to be an easy ride all the way to rapture, he quickly discovers that life as a Christian soldier is a much rougher experience than taking a ride on a monster roller coaster.
With all sorts of faith-crushing IEDs littering the road he travels, and with his bed stuffed with soul-piercing thorns, the warring Christian soldier faces real and ever-present danger of losing body parts or paying the ultimate price. As a warrior he expects the enemy to attack. He's prepared to lose a few battles, endure sleepless nights, deal with hunger, tolerate poor clothing, cope with the elements, and live with the trauma of war.
Apostle Paul, in 2 Corinthians 11:24-28, gave an account of his own harrowing experience as a foot soldier in God’s armed forces.
“Five different times the Jewish leaders gave me thirty-nine lashes. Three times I was beaten with rods. Once I was stoned. Three times I was shipwrecked. Once I spent a whole night and a day adrift at sea. I have traveled on many long journeys. I have faced danger from rivers and from robbers. I have faced danger from my own people, the Jews, as well as from the Gentiles. I have faced danger in the cities, in the deserts, and on the seas. And I have faced danger from men who claim to be believers but are not. I have worked hard and long, enduring many sleepless nights. I have been hungry and thirsty and have often gone without food. I have shivered in the cold, without enough clothing to keep me warm.”
Beyond all the hardship and the sufferings, and outside of the pain and sorrow, that are sure to come the way of the Christian in his walk with Christ, perhaps the most arduous challenge that Christianity poses for the born-again believer is the paradigm shift in his view of, and approach to, life. If anyone comes to Christ, he is a new creature, old things are passed away all things become new. The Christian life involves making a U-turn from the old way of life.
When a man gives his life to Christ, he is rescued from the clutches of the dominion of darkness and delivered into the safe territory of the kingdom of the only Begotten Son of God. This salvation involves, and requires, a change of allegiance. Loyalty to the old life is renounced, and a new way of life is embraced.
This new life requires an absolute submission to a new set of rules and standards, and it demands subjection to new codes of conduct. A feeble, mealy-mouthed, and half-hearted devotion will not suffice. It's a life that demands total commitment to the cause of the Lord and Savior.
Not surprisingly, old masters don’t let go easily. A change in allegiance always triggers devastating repercussions. Those who choose to commit their lives to Christ, and who have turned from darkness to light, often face retribution for betraying the kingdom of darkness and they suffer greatly for renouncing Satan. Just as the world hates Christ so does it hate those of whom have been called by Christ.
Notwithstanding, there are Christians, having laid their hands on the plow, who continue to look back with longing for their old life. These are those who crave to be loved and accepted by the world. To gain the affection of the world, they adopt the ways of the world and behave like them that belong to the world.
Afraid of offending the world and getting ostracized by it, these folks, who have been called to be separate from the world, choose instead to embrace it and assimilate into it. In every way, they think, talk, see, ear, and act like the world does. In the process, they compromise their faith and ruin their testimony.
Having thus bargained away their rights as sons of God, you can no longer find any daylight between them and the world, for they and the world have become indistinguishable. They may look right, talk right, smell right in the Christian sense, but nothing about them is right. Their soul is soiled, they are rotten to the core, and are far from God.