A TWO-MILE CHURCH IN A ONE-MILE WORLD (PART IV) 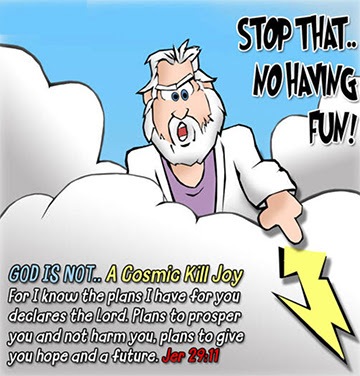 “A Cosmic Killjoy, God Is Not”
By Akin Ojumu
“Can it really be that God has said, ‘You shall not eat from any tree of the garden’?' (Genesis 3:1).
With that seemingly innocuous and sympathetic statement, the Devil destroyed the destiny of man. That question continues to reverberate through the ages. The duplicitous inquiry that brought humanity down to its knees still haunts the offspring of Adam from generation to generation. It was at that very first encounter between man and Satan in the Garden of Eden, that the seed of a deadly idea was sown in the heart of men. As the millennia have gone by, the tiny seed of doubt about the character of God planted that day has grown into a mighty forest of giant oak trees that inhibit the world from seeing God for whom He really is.
What Satan did on that fateful day was to create, in the imagination of man, a bogeyman of an untrustworthy character out of God in the eyes of man. This gremlin of a Supreme Being is a wicked God who enjoys your pain and misery and wants to deny you all the good things in life. The Devil painted a portrait, in the minds of man, of a God who is a tyrannical and all powerful deity who wants to keep man perpetually low, blind and unwise.
This monstrosity of a Celestial Being is a Cosmic Cop standing in the center of the galaxies like a police officer directing traffic flow. In this picture created by Satan in the mind of Eve, Elohim is a Cosmic Killjoy who derives pleasure from ruining your fun and gets his kicks from raining on your parade. The caricature of the Almighty God that the Devil imprints in the mind of man is that of celestial buzzkill who wants to take away your joy.
This distorted image of the character of God is a major reason why most people don’t want to have anything to do with God. It is this erroneous impression of a soulless God that underpins the struggle many have reconciling a loving Father with a God who allows evil in the world and permits adversities in their own lives. Christians are not immune from these distortions of God. There are many in the Church who also wrestle with the question of why God would ever allow those who worship and serve Him to become poor and get afflicted.
But, notwithstanding Satan’s continued attempt to tarnish God’s reputation, the Almighty God is a loving Father who wants what’s best for all His children. As much as Satan tries to besmirch the character of God in the minds of men, the immutability of God standeth sure. His character is unchanging, and His will remains constant. A covenant keeping God is Jehovah. He is forever holy, righteous and just. The God we serve is love, merciful, and faithful.
Our loving Father will not withhold any good thing from those who walk uprightly. He bountifully rewards righteousness. David attested to God’s everlasting commitment to bless them that walk uprightly before Him when he declared in Psalms 37:25, “I was young and now I am old, yet I have never seen the righteous forsaken or their children begging bread.”
Whatever situation a follower of Christ – who walks in total obedience to God’s commands – finds himself, is actually a blessing from God. You may be rich or poor, healthy or sickly, strong or weak, popular or a nobody, any circumstance that comes the way of the faithfully committed Believer is a testament to the fact that God is at work in the life of that person.
Now, if that is difficult for any Christian to accept, it is because such an individual hasn’t yet understood the ways of God. The Believer who struggles to comprehend that God, from time to time, allows to happen to us what in our eyes may seem unpleasant and uncomfortable, doesn’t fully appreciate that this present world is not the end of all things, and that we are on a voyage in this life.
“If our hope in Christ is only for this life, we are more to be pitied than anyone in the world” (1 Corinthians 15:19).
Our life on earth is nothing but a journey to eternity. Everything that God permits to happen to us, and whatever the blessing that God allows us to enjoy, is always within the gracious consideration of whether it constitutes either a stepping stone or a stumbling block to our progress to eternal life.
Because God is a loving Father, He will not give His children anything that will become a stumbling block to them from making eternity and thus prevent them from receiving a crown of glory.