A TWO-MILE CHURCH IN A ONE-MILE WORLD (PART III) 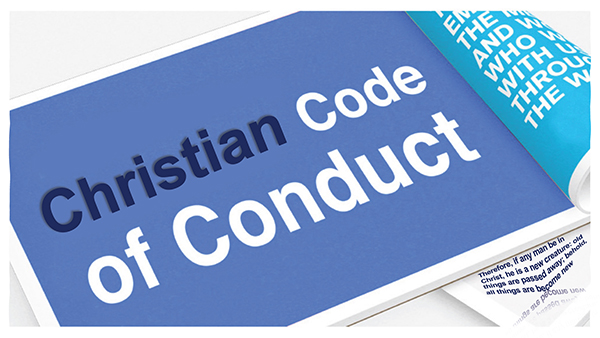 “The Christian Code of Conduct”
By Akin Ojumu
Nevertheless, the Captain of our salvation did not leave us without a proper manual of operation. He provided us a handbook of instructions for living an acceptable Christian life, one that leads to eternal life. By His divine power, we've been given everything we need to live a godly life through our knowledge of him who called us by his own glory and goodness.
In His Sermon on the Mount, the King of kings laid down the Code of Conduct by which those who are called by His name shall live joyously and victoriously even through the trials and tribulations that the enemy of their faith brings their way. These rules of engagement are totally antithetical to the modus operandi of this world.
In a series of “You have heard that it was said, thou shall or shalt not,” the Lord deconstructs the moral code of the present age and establishes a far more superior set of rules to guide the behavior of those looking forward to the coming age.
The Lord declared in Matthew 5:20, “For I tell you that unless your righteousness surpasses that of the Pharisees and the teachers of the law, you will certainly not enter the kingdom of heaven.”
You see, it isn’t enough for the Christian not to be a murderer, he must not as much as harbor anger in his mind towards anyone. Refraining from adultery is just a start, God’s acceptable standard for him not to look at a woman lustfully.
The Christian living in obedience is one who turns the other cheek, gives his coat when sued for his shirt, and goes the extra mile. He lends without usury, and from those that borrow from him he asks not to be repaid. Such a man would rather suffer himself to be defrauded than take a fellow believer to court.
He is poor in spirit (i.e., he's devoid of spiritual arrogance and regards himself as nothing...a beggarly nobody), mourns over his sins and repents, and ever so gentle. Such a Christian hungers and thirsts for righteousness (i.e., actively seeks right standing with God). He is merciful, pure in heart, seeks and maintains peace as long as it doesn't violate his convictions or compromise his faith.
The Lord’s code of conduct demands that the Christian loves his enemies, performs his acts of charity in secret, practices his faith in humility, stores up his treasures in heaven, and worries not about his life; what he shall eat or drink, or about his body; what he shall put on. The lover of God must know his life is more than food, and his body more than raiment.
The true believer recognizes it's only by the grace of God that he is not consumed, and he understands he does not stand by his own power or might. Every waking moment, he walks, not aimlessly, but as someone with a definite purpose, and he fights not as one who beats the air. The heaven-bound Christian knows his battle is not against flesh and blood, and he learns to put on the whole armor of God at all times.
The Believer on the narrow road to eternal life is a two-mile Christian living in a one-mile world. He is ever sober and always vigilant, understanding that his adversary the devil goes to and fro, like a roaring lion, seeking whom he may devour.
The true lover of God endures hardship like a good soldier, and like a battle-hardened fighter, he takes the punch on the chin and doesn't flinch back a tiny bit. His prayer is not, “God, don’t let me walk in the valley of the shadow of death." Instead, all he asks is that God's presence will be with him, giving him comfort along the way.
“Be ye perfect, therefore, even as your Father which is in heaven is perfect.” (Matthew 5:48).
That is the Lord’s command. The bar for righteous living is set pretty high, it cannot be attained by human strength or sheer will. The standard that God prescribes for the Believer is an onerous one indeed. God alone is He who equips His own to meet the challenge, and it is God alone who gives grace to the man who desires to please Him.