THE IRONY OF THE CHRISTIAN CONSERVATIVES 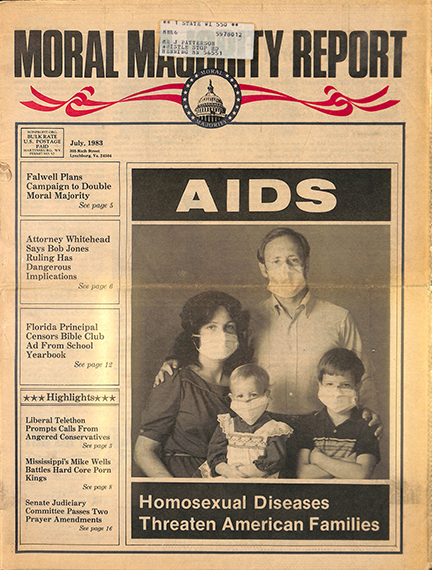 By Akin Ojumu
In the early 1980s, at the very beginning of the HIV/AIDS epidemic, the American white evangelical community mounted a full-course press to force the administration of then POTUS, Ronald Reagan, to downplay the dangers of the new disease which they believed was a divine retribution unleashed upon gay people for their sinful lifestyles. The Christian conservatives revolted against government’s efforts to curtail the spread of the “Gay Disease" or “Homosexual Disease” – their derogative label for AIDS.
Churches and conservative news media outlets became the fountain of all sorts of conspiracy theories about HIV/AIDS. Christians were told to avoid contact with people who were HIV-infected and those living with HIV were denied the use of restrooms. Schools and neighborhoods were closed to children with AIDS and their families. Some churches even banned persons with HIV infection from attending Sunday schools and church services.
The American Christian conservatives religiously promoted face masks as the solution to stopping the spread of HIV/AIDS – a disease caused by a blood-borne virus previously unknown to man. In a July 1983 edition, the Moral Majority Report, which was at the time the premier news outlet of the religious right, pushed the faux theory of the effectiveness of a facial covering against a blood-borne disease further by depicting on its front cover a photo of a white family all wearing face masks with the bold caption, "AIDS: Homosexual Diseases Threaten American Families."
Forty years later, it’s like déjà vu. To shrug off the feeling of being in a time capsule that has traveled back in time presents is proving to be an exercise in futility. With another virus of pandemic proportions spreading globally, the Christian conservatives have again gone on a crusade against the government's effort to stop the disease. Just as it was back in the early days of the AIDS epidemic, the religious right and its conservative news media outlets have once again been the main sources of conspiracy theories about COVID-19.
The only difference this time is the fact that they’ve chosen to take the opposite side of the utility of the face mask in the current pandemic. In the early 1980s, the Christian conservatives vigorously advocated for the use of face masks in an epidemic caused by a blood-borne virus. This time around, however, when an actual airborne virus is spreading, the folks on the religious right have taken up arms against public health measures that are actually effective against viruses that spread by air droplets. For instance, they have vehemently resisted the use of face masks, opposed social distancing, kicked against lockdowns, and to them, the COVID-19 vaccines contain DNA constituted from the semen of demons. Instead, they promote disinfectants, validate ultraviolet radiation, and encourage the use of cow dewormers as the true potent remedies for SARS-CoV-2.
To say that epidemics bring the worst out of religious people is an understatement of the highest order. This is particularly true for religious folks of the white evangelical extract and certain African Christians – read that as Nigerian Christians – who are easy prey for mendacities. Perhaps, it’s the easy-believism mindset widespread in white evangelicalism or the unthinking fatality prevalent in African pentecostalism. For some unexplained reason, worldwide plagues seem to reveal the worst of those on the religious right, and by some fortuitous divine act of unmasking, pestilence has a way of shining the light on the darkness hidden in their soul.
The very same people who lay sole claim to the pro-life diadem are the very same ones you always find waging wars against measures instituted to save people’s lives. Irony isn’t just dead; it is currently spinning in its grave.