IS THE OMICRON VARIANT SUCH A BAD HOMBRE? 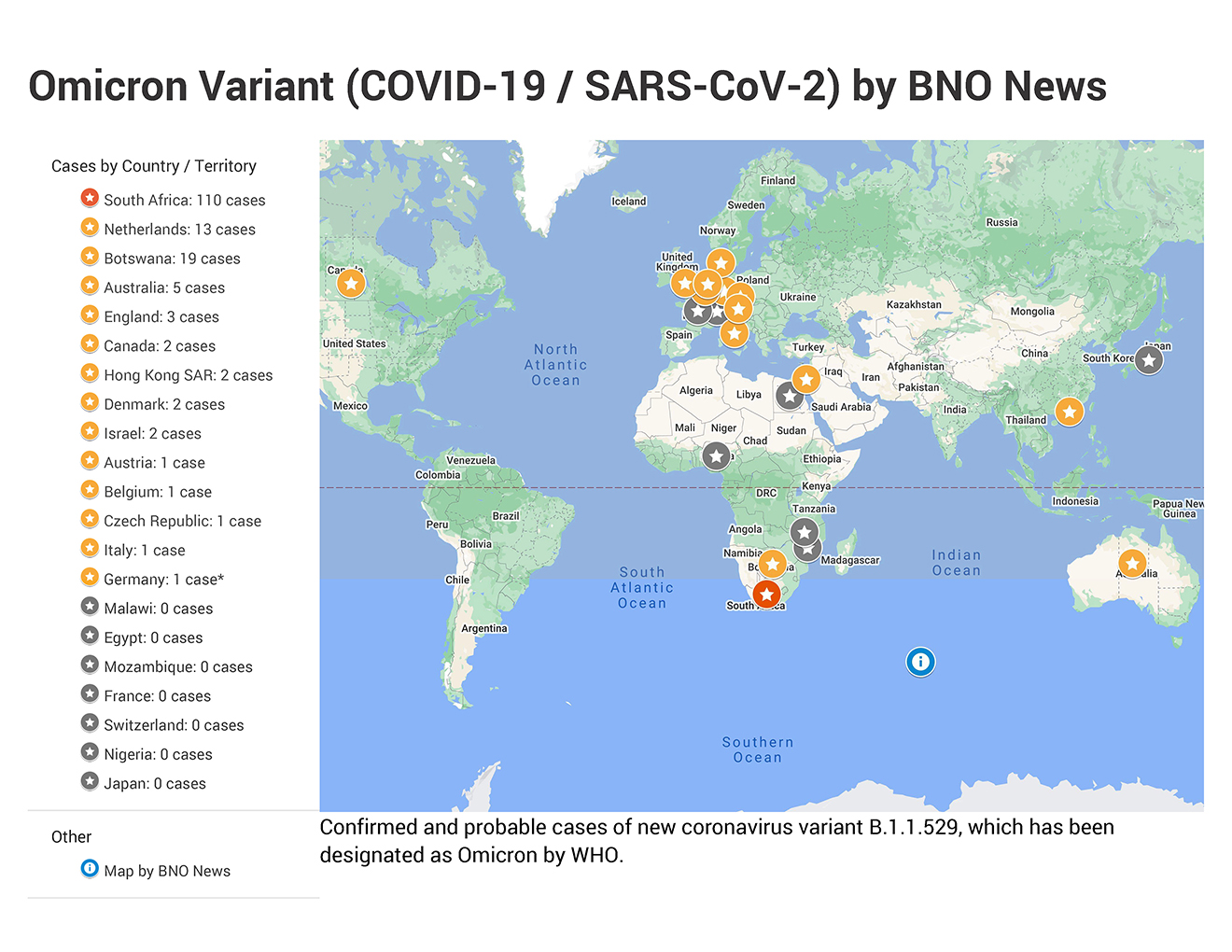 By Akin Ojumu
In the nomenclature of the Coronavirus variants, we are almost two-third of the way down the Greek alphabet. The Omicron is the latest variant of concern making its way through the nations of the world. As of today, there have been 163 cases detected across multiple countries but it is still predominantly found in South Africa.
With such a few number of cases detected to date, the panic of the new variant seems to be spreading much faster than the variant itself. Since its first discovery in South Africa, travel bans have been instituted around the world. Alarmed that Omicron will lead to a resurgence of cases of COVID-19 in their countries, governments of wealthy nations have shut their borders to non-citizens coming from the Omicron hotspots of Africa.
Rightly or wrongly, these travel bans have been decried as discriminatory and borderline racist in some quarters because they target mostly poor nations with the lowest rates of COVID-19 vaccination to begin with. The low vaccination rates in these shit hole countries – to borrow from the famous saying of a former POTUS – is a result of limited access to the COVID-19 vaccines. Limited access to the vaccines is caused by the lack of availability. The vaccines are not available in the poorer nations because the wealthy nations have been accused of hoarding them. The governments of rich nations, who rather than embezzling and plundering their nations' resources chose to invest in the production of the vaccines, are being faulted for their lack of "adequate" generosity in sharing the product of their intellectual and financial endeavors with poorer nations whose government officials squandered their nations resources and enriched themselves at the expense of their poor masses. Nations who contributed nothing to the vaccines’ development intellectually, financially or otherwise are pointing accusing fingers at those who saw it fit to do so.
Anyways, the generosity or otherwise of wealthy nations and the entitled mindset of poorer nations are not the subjects of this write-up.
What's important to know at this point is whether the Omicron variant is so much deadlier than its ancestors that it should require the travel bans and border shutdowns been instituted by the wealthy nations to stop its spread? From the little we know about the Omicron variant – which is not a whole lot – are these measures really necessary and/or justified?
Here's what we know and what we don't know so far.
(1) We know that the Omicron has over 30 mutations in the spike protein an unusually large number of mutations.
(2) We know that spike protein mutations may make it easier for the virus to enter a host cell where it can replicate. Some mutations, however, might have the opposite effect. Also, some mutations may help the virus more easily evade our existing acquired immunity, whether from prior infection or vaccines.
(3) We do not have any evidence that Omicron is more contagious than prior variants.
(4) We don’t have publicly available data to tell us whether Omicron causes worse disease than its forefathers or whether it does so more frequently.
(5) We don’t know if Omicron is able to escape immunity that individuals have, either from prior infection or vaccination.
(6) We don’t know whether Omicron will reduce the effectiveness of the vaccines against mild or severe COVID-19 infection.
(7) So, we don’t know whether Omicron will cause more incidence of breakthrough infections than the previous variants.
While there remains a lot of known unknowns and unknown unknowns, surrounding the Omicron variant, one known known is that Omicron variant is bad news, and the vaccines are still the best line of defense available to counter it. Getting vaccinated – 2 shots plus booster shot – is the bulletproof against getting knocked down and/or knocked out by the latest offspring of SARS-CoV-2.