SPACE RACE OR COW RACE: WHICH ARE YOU ON? 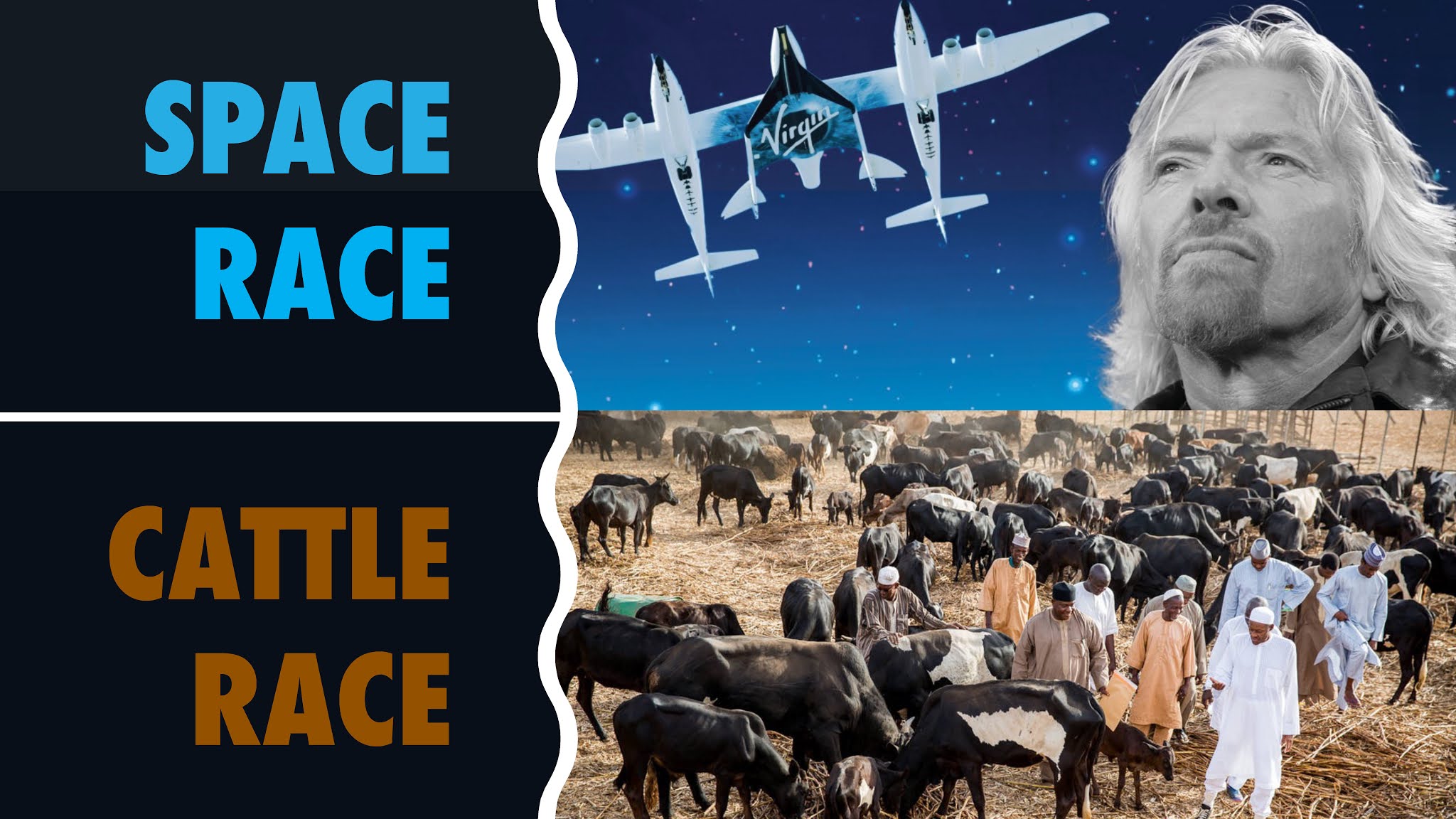 By Akin Ojumu
Billionaire Richard Branson, the owner of Virgin Atlantic and Virgin Galactic, rocketed off to space this morning on the maiden voyage of his Virgin Galactic’s VSS Unity. This marks the first ever privately funded travel to space embarked upon and it launches an entirely new economy, the commercial space travel industry. After multiple failures, countless catastrophic encounters, and several near-death experiences, Sir Branson has succeeded in turning the dream of a commercial spaceline and private space travel into reality.
As reported by CNN:
The flight conducted more than 20 test flights, three of which have reached the edge of space. It is affixed to a mothership, called WhiteKnightTwo, that looks like two sleek jets attached at the tip of their wings. The mothership will take about 45 minutes to cruise along and slowly climb with VSS Unity to between 40,000 and 50,000 feet.
When the pilots give the go-ahead, the space plane will drop from between WhiteKnightTwo's two fuselages and fire up its rocket engine, swooping directly upward and roaring past the speed of sound.
From the time the ship leaves the ground to the time the spacecraft lands back down on it, Richard Branson's trip aboard Virgin Galactic's VSS Unity should only take roughly an hour. Unlike traditional space travel where astronauts circle the Earth and float in space for days, Virgin Galactic's flights are brief, up-and-down trips. But the spacecraft will go more than 50 miles above Earth, which the US government considers marking the boundary of outer space.
For me, I find the whole thing strikingly surreal and dreamily inspiring. One man with a vision and the means successfully turning his dream to reality is something extraordinary and outright legendary. It is a remarkable feat of human endeavor certainly to kick off a new phase in space exploration, advance technological development, and abundance of job opportunities for the world.
As I seat here watching this epoch-making event, my mind drifted back to the land of my birth, Nigeria. I couldn’t help but think of the president of my motherland who is more passionate about preserving cattle grazing than protecting human beings. It’s impossible not to remember that the leader of Nigeria has consistently shown more resolve at reviving old cattle routes and grazing areas established by a Nigeria’s First Republic gazette in 1963, than engineering the development of human capital in 2021. While leaders of other nations are preoccupied with creating the enabling environment for productive economic activities, the occupant of Aso Rock flexes his muscle at human right activists and he brags about the arrest and harassment of those fighting for self-determination.
“When the righteous thrive, the people rejoice; when the wicked rule, the people groan.” – Proverbs 29:2.
By some act of misfortune, a 21st century Nigeria is ruled by a man stuck in the 19th century. Calling the shots in a nation of 250 million people is a detached leader who can only be roused from his perpetual somnolence by the moo of roaming cows and the smell of cattle poop. Sadly, the man that sets the tone for the nation is aloof and politically tone-deaf.
Any wonder then that those with means in Nigeria make no meaningful impact in the society at large.
Whereas Nigerian billionaires measure their wealth by the size of their private jets, billionaires in other lands show their wealth by leading a voyage to the edge of space. Those who are wealthy in Nigeria like to dig up the ground and bury their wealth and they take their money and hid it in bank vaults in foreign lands. In the developed world, however, wealthy people open up their hearts and invest their wealth in the commonwealth of their people. In Nigeria, the worth of a man is determined by the size of things that make him mad. Elsewhere, in other lands, a man’s worth is benchmarked by the number of lives they’ve lifted up from rags and set in path of glorious future.
Indeed, it is a galaxy of difference between a visionary leader and one who is ordinary. A lightyear degree of separation exists between a nation where human potentials thrive limitlessly and one where human potentials die needlessly.
“Toute nation a le gouvernement qu'elle mérite. Every nation gets the government it deserves.”