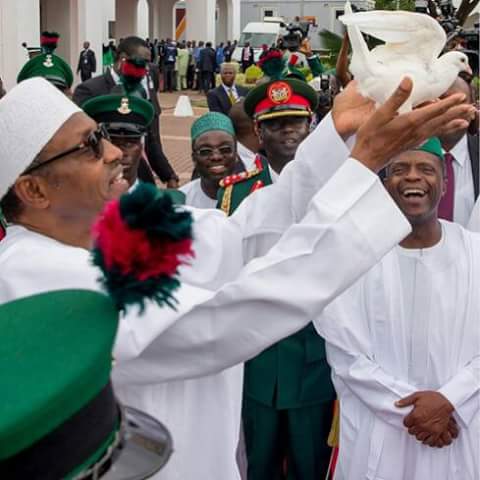 By Akin Ojumu
The U.S., Canada, the European Union, the U.K. and the Republic of Ireland issued a joint statement Saturday condemning Nigeria's government for banning Twitter.
The statement reads:

The diplomatic missions of Canada, the European Union (Delegation to Nigeria), the Republic of Ireland, the United Kingdom and the United States covey our disappointment over the Government of Nigeria’s announcement of suspension of #Twitter and proposing registration requirements for other social media.
We strongly support the fundamental human right of free expression and access to information as a pillar of democracy in Nigeria as around the world and these rights apply online as well as offline. Banning systems of expression is not the answer. These measures inhibit access to information and commerce at precisely the moment when Nigeria needs to foster inclusive dialogue and expression of opinions, as well as share vital information in this time of the COVID-19 pandemic.
The path to a more secure Nigeria lies in more, not less, communication to accompany the concerted efforts of Nigeria’s citizens in fulsome dialogue toward unity, peace and prosperity.
As Nigeria’s partners, we stand ready to assist in achieving these goals.

That's all diplomatic speak. Now, let’s translate all of that into the language ordinary folks like you and me would understand. Let me tell you the real message these powerful nations are sending to Muhammadu Buhari in their statement.
Dear Mr. President,
When we heard of your latest foray into irrationality, we couldn’t help but crack up in uncontrollable and rib-hurting laughter. The announcement by your Attorney General to suspend Twitter sent us rolling on the floor with hysterics.
Really? You, who couldn’t make pigeons fly wants to ban Twitter? LOOOOLLLLLLL!!!!! That is so very funny!!!! And we thought we’ve seen it all.
As the saying goes, "With old age comes wisdom." Apparently, that’s not the case with you, Mr. President. It seems as though the older you get, the more idiotic you have become. As you’ve advanced in age, you’ve become increasingly unable to gauge the limit of your power and extent of your influence. Your old age appears to have dulled your senses, making you incapable of being in tune with the feelings of your people.
It is quite pathetic, you know, that you'd stoop so low to ban Twitter simply because they flagged one of your recent tweets – the one where you actually threatened war and genocide on the helpless people of Igboland who had been crying out to you in horror, and pleading with you to do something about your fellow Fulani kinsmen who run rampage through their land destroying their farms, kidnapping their women, and murdering their men.
This thoughtless action of yours goes to confirm what the majority of Nigerians think you are; a lame and weak leader who’s pretending to be a strong man.
A leader who cannot provide his country a 4-hr uninterrupted power supply should not be taken seriously when he threatens to ban a technology powerhouse like Twitter.
The threat of banning Twitter by a Commander-in-Chief who commands an army of hapless soldiers equipped with rusted guns and creaking armored tanks is nothing more than firing blanks from a toy gun.
A threat of social media ban from a lethargic octogenarian who oversees a nation where the telecommunication system is antiquated, the education system is stuck in the stone age, the healthcare system is in absolute shambles, and potable water supply is a strange phenomenon only deserves a shrug and a yawn.
When the leader of a country where nearly all the roads are death traps in a perpetual state of disrepair issues a ban on social media, such a fulmination should not evince as much as a frown.
Such a threat from a man who rules over the poverty capital of the world is practically toothless. It is an empty boast of a drunken man who threatens to beat up a world boxing heavyweight champion; he’ll only succeed in getting his ass whooped.
Mr. President, as a supposed head of state, how callous and insensitive can you be? What kind of leader watches a section of his population decimated by violent mobs and coldblooded marauders and, without offering empathy or showing concern, promises to unleash violence against the very victims of violence? Who does that? We know you are senile and an imbecile, but must you also be callous and soulless? What in the world is wrong with you? Do you know not know that you are sitting on a ticking time bomb and that the country is a powder keg waiting to be lit?
You ought to get this fact into your thick Fulani skull, Mr. Presdeint. Canada, the European Union, the Republic of Ireland, the United Kingdom, and the United States do care – and are gravely concerned – about the security situation in Nigeria. As the superpowers of the world, we will not stand idly by and allow you to destroy this giant of Africa. Be rest assured that we stand with the people of Nigeria, and we will come to their rescue if and when it becomes necessary for us to do so.
Your people deserve to live in peace and security in their own homes. All Nigerians have the right to expect their government to ensure their safety and security as they go about pursuing their daily lives. It is not too much for the people to ask their leader to protect them from murderers and rapists even if those murderers and rapists are your Fulani kinsmen. We will resist any attempt by a few bad elements from the North – or wherever they come from – to turn Nigeria into a war zone.
Mr. President, we are watching you. To be forewarned is to be forearmed. Before you start issuing empty threats against Twitter and the social media, we’d advise you to focus the little energy you have left on getting those pigeons to fly.
Signed: Canada, EU, Republic of Ireland, U.K., U.S.