RAISING HELL ABOUT THE SATAN SHOES 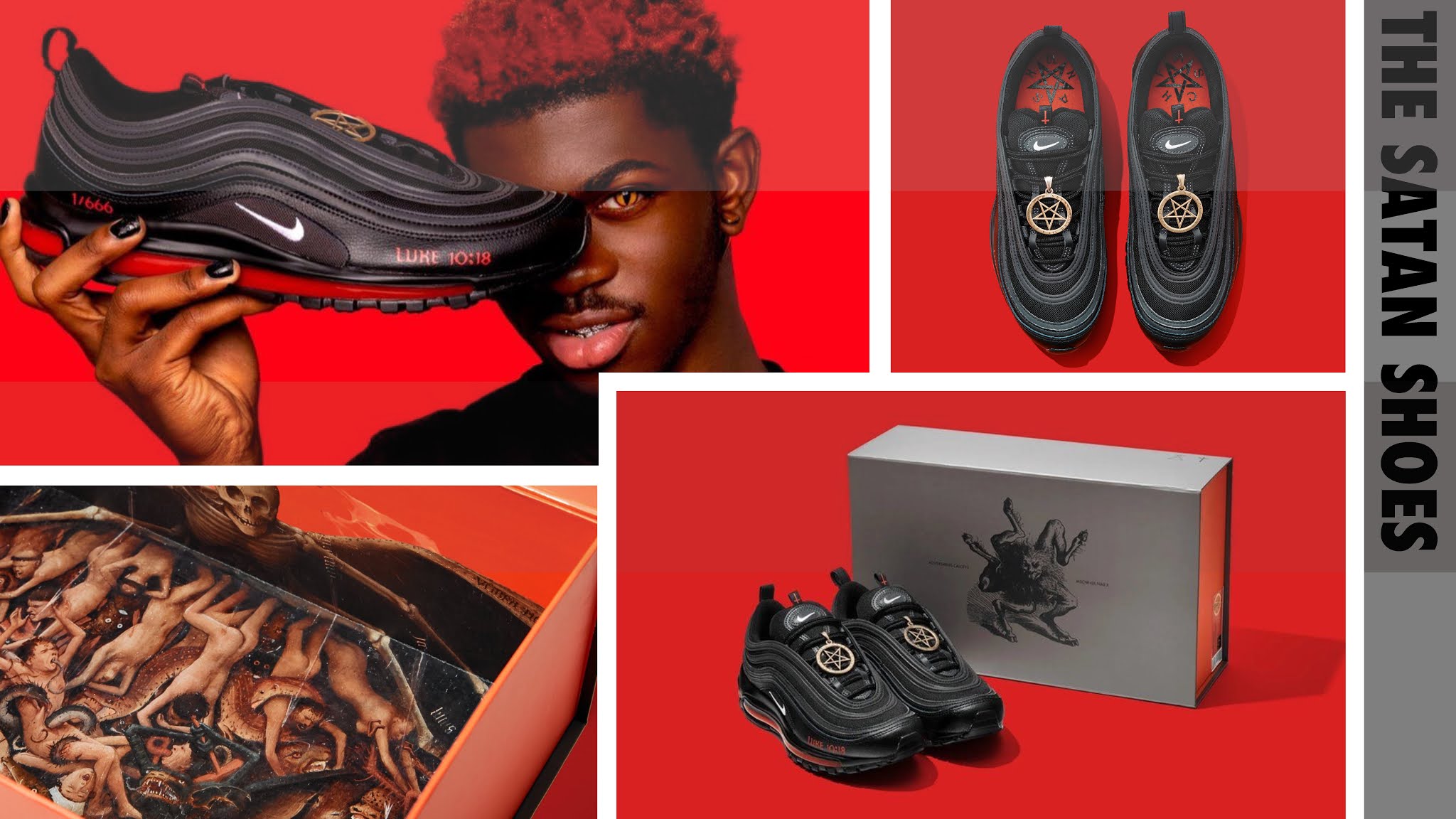 By Akin Ojumu
The Satan Shoes hit the market yesterday, Monday, March 29, 2021, with only 666 pairs made available for sale. Despite an eye-popping sticker price of $1,018 per pair, the entire 666 pairs were all immediately sold out within a few short minutes after being on the market.
With a design modeled after the Nike’s trademark Air Max 97 design, the Satan Shoes are said to contain a drop of human blood in the sole. They are decorated with a pentagram and a reference to Luke 10:18, a Bible verse that says, “…I beheld Satan as lightning fall from heaven…,”and the shoe box has ghoulish figures emblazoned both on the inside and outside of the box.
As to be expected, the release of the Satan Shoes has triggered the righteously indignant bedfellows. Like hungry dogs thrown a bone, the culture warriors and the professional victims are all out, pitchfork in hand, tripping over themselves trying to outduel one another in how high a hell each person can raise against such profound effrontery.
Following the template script of contrived outrage, the Nike shoe company has quickly denounced the Satan Shoes and have said the company had nothing to do with either their creation or their marketing. Furthermore, Nike has filed a copyright infringement lawsuit against New York-based company MSCHF who created the controversial shoes in collaboration with rapper Lil Nas X, whose legal names by the way, are Montero Lamar Hill.
For MSCHF and Lil Nas X, nothing about their Satan Shoes is covert. The message is poignant, the mission pretty clear, and nothing is hidden. The rai·son d'ê·tre is the glorification of Lucifer. It is an unapologetic declaration of adoration of Satan and an in-your-face brazen embrace of satanism and dark occult. There is no cunning craftiness, no clandestine concealment, no hanky-panky, and no surreptitious sneakiness. It is all done in the open for everyone to see, know and understand.
And it is exactly for the above reasons that I did not bat an eyelid when the news initially flashed across my social media and news feed. Unlike the folks acting out at this provocation brought on by the release of the Satan Shoes, I fail to see what is new in a lost soul going all gaga over Satan.
The glorification of Lucifer goes on a daily basis in our world. Everywhere you look, in every nook and cranny, the celebration of the Devil is all over the place. Monuments to Lucifer litter our landscape and the airwave buzzes with satanic whisperings. Satan is worshiped in our songs, he is adored in our fashion, and he’s revered in our books. The mosques dole out salutations to Satan. Our Churches are replete with practices and rituals that could have only come from the pit of hell. Yet, these are all packaged in ways that seem rather innocuous to the untrained eyes, and they are wrapped up in robes of righteousness that unsuspecting minds cannot discern.
Destructive heresies of false prophets and false teachers metastasize through the Body Christ without so much as a thought. With practiced ease, and with little pushback and almost zero resistance, wolves in sheep’s clothing lead hundreds of millions of Christians astray, bewitching and holding them captive, by the sensuous doctrines they pumped out to the Church stratosphere.
Between Lil Nas X and his Satan Shoes or the deceivers who fill the Church pulpits and pump out seductive heresies that corrupt the souls of their listeners, if you ask me which of them I fear most, my answer is easy to decipher. Better is the devil you know than the devil you don’t. I’m more afraid of the little foxes – the secret agents of Satan – who surreptitiously burrow themselves deep inside the heart of the Church and who from within wreak untold havoc to the truth of the Gospel and who make a shipwreck the faith of many of the undiscerning faithful who fall prey for their gimmick. As far as I’m concerned, these followers of Balaam are far more dangerous to Christianity, and the world at large, than a billion pairs of Satan Shoes made and sold to the world.
The ancient Chinese general Sun Tzu wrote, "Know thy enemy and know yourself; in a hundred battles, you will never be defeated. When you are ignorant of the enemy but know yourself, your chances of winning or losing are equal. If ignorant both of your enemy and of yourself, you are sure to be defeated in every battle."
An open attack by Satan is much easier to win than a guerilla combat with the Devil. As Christians, we stand a better chance of victory when Satan engages us in a conventional warfare than when he presents himself to us as an angel of light and he lures us into slumber and ultimate destruction by his guile and cunning craftiness.
In the former scenario, who and what we are fighting is known to us, and thus easy to fight back; it is a much fairer fight. The latter, however, is a tougher slug because before we even realize what is happening, we are flat on our backs knocked out by the devil’s blow we didn’t see coming. And that is a far more precarious brawl to fight. When you know who your enemy is, you stand a chance of winning the battle. With the Satan Shoes, the enemy has shown his hand, all we need do is put on the whole armor of God and fight the good fight of faith.
So, for all those who are quick to throw a fit and raise hell at the slightest provocation of Satan, you all need to chill out. For all those freaking out over the latest demonstration of Satan’s hold on the soul of unregenerate men, you all need to just quit the melodrama. The devil is no more powerful today than he was yesterday. And God is no less powerful right now than He has always been.