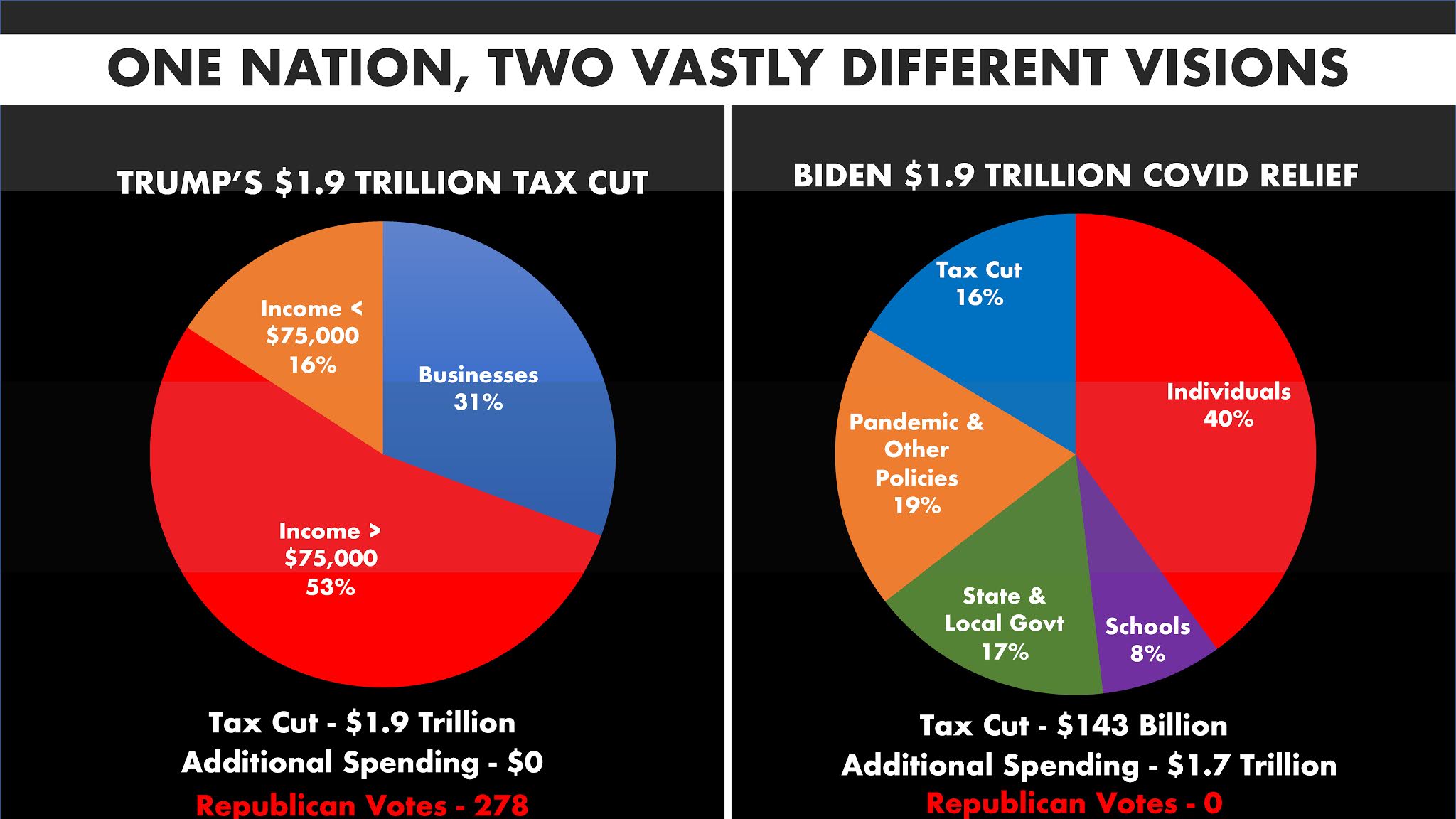 By Akin Ojumu
When Donald Trump and the Republicans passed their $1.9 trillion Tax Cut and Jobs Act back in 2017, the rich and powerful in the land popped the champaign and the high and mighty gave a toast to the god of lasciviousness. The Tax Cut and Jobs Act was an audacious giveaway to big businesses, major corporations, and the masters of the universe that own them. The law was windfall for those who already were living in excess and have got a whole lot more than they ever needed. The rest of us were left with crumbs that fell from the tables of the slave masters. Trump and his fellow Republicans signed into law a trickle-down tax plan that tilted the playing field in favor of the affluent and opulent.
Fast forward 4 years, an election came that swept away Trump and his fellow Republicans from power, ushered in a new dispensation of Joe Biden and the Democrats, and a different vision for the nation. Oh boy! What a difference in philosophy and ideology. It is a profound contrast between two men and two parties. The nation, in real time, is peeping into the souls of the people they’ve chosen to rule over them.
Joe Biden’s vision for America puts a premium on the lowly and neglected (i.e., “the least of these” of the society). Bidens relief plan strives to lift up the downtrodden, it seeks to assist the impoverished, and it pushes for a level playing social and economic field in which any and all Americans who can, and who want to, have the opportunity to improve their own lives. Not only does the Biden relief plan provide fish to those who need fish, it also creates an enabling environment where anyone can learn to become a fisherman. And that’s not all. The Biden’s relief plan went even further; it transfers the ownership of the fishpond to everyone and not just the few lucky ones.
The following are a few of the key differences between the two plans:
Trump’s Tax Plan 2017
1) Under the Trump’s tax plan, 65% of the benefit from the $1.9 trillion went to the top 20% income bracket while only 1% of the benefit went to people in the lowest 20% income bracket
2) The average after-tax income for the top 0.1% of wage earners, i.e., households making more than $3.4 million, increased by 2.7%.
3) In contrast, the average after-tax income for the bottom 20% was 0.4%.
4) The Trump tax plan was supported and voted for by close to 278 Republicans in Congress.
Biden’s Relief Plan 2021
1) Under the Biden’s relief plan, while 11% of the $1.9 trillion went to the top 20% of wage earners, 23% of the benefit went to those in the bottom 20% of wage earners.
2) The Biden plan will raise after-tax income by about 20% on average for households making $25,000 or less, or the bottom 20% of wage earners.
3) The average after-tax income for the top 0.1% of wage earners, i.e., households making more than $3.4 million would not rise under the coronavirus relief bill i.e. the top 0.1% gets 0% increase in their after-tax income.
4) Not a single Republican in Congress voted for the Biden’s relief plan
To Trump and his fellow Republicans, the rich rules and the poor are forever losers and suckers who deserve nothing but crumbs from their government.
Joe Biden and his fellow Democrats present a different vision and priorities for America. Unlike the Republicans, they see the poor as human beings with great potentials. To them, the less fortunate are winners and champions deserving of all the help they can get from their government. The wealthy, the Democrats believe, owe the society from where their wealth was created. And they see giving back to the society as a civic duty that the rich must embrace without complaint.
In order for Americans to stop voting against their own self-interest, they must bear in mind these contrasting visions when next they go to the polls.